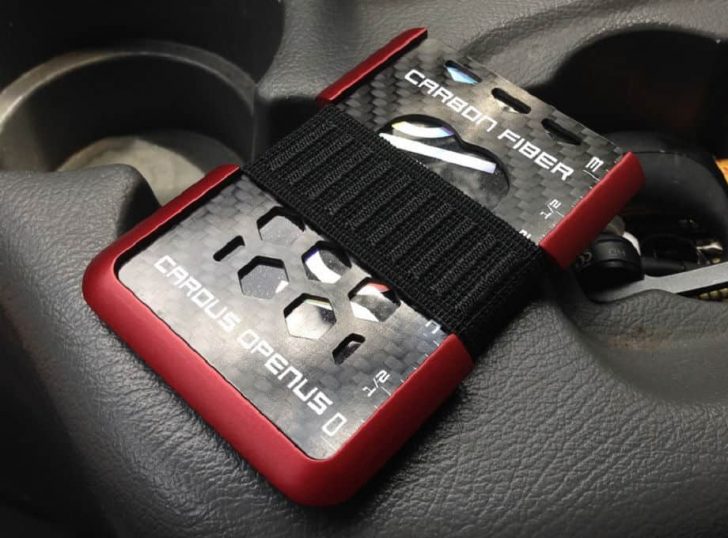 We’ve done reviews on numerous wallets in the past including interesting ones such as the Backslider Anti-Surveillance RFID Blocking wallet and the ultra-thin Yasutomo Wa-Ben wallet made out of Cuben which is used in sails for boats. We’ve also reviewed various leather wallets but the one we’ll be briefly looking at is not yet available but in the process of being funded on Kickstarter called Billetus – Carbon Fiber Billet Wallet.

The Billetus wallet is made out of carbon fiber, titanium, and aircraft grade aluminum. I’ve never owned a wallet made out of metal which is one of the reasons it caught my attention. The Billetus is as thin as an iPhone 4S, super light, and unlike some metal wallets out there; the edges are tapered to make it easier to put in your pockets. Anther bonus, the Billetus also features RFID blocking to protect you from identity theft and scams.

The wallet is available in two different models with the first being the Billetus Minimus which uses 6061 aircraft grade aluminum unibody construction and an elastic strap allowing for five cards and five folded bills. The Billetus Minimus is 8.5mm thick. The second model is the Billetus Maximus and this one is the premium model featuring construction from carbon fiber, titanium and aircraft grade aluminum. This model is 9.5mm thick and will fit up to eight cards and five folded bills.

A pledge of $45 will get you the Billetus Minimus while the Billetus Maximum will set you back $105. That may seem like a lot for a wallet but there are plenty of other wallets out there that cost a lot more. Not only that, these wallets are built to last and there should be no reason to replace this one for many years. For more details, check out the Billetus website and the Billetus Kickstarter page.