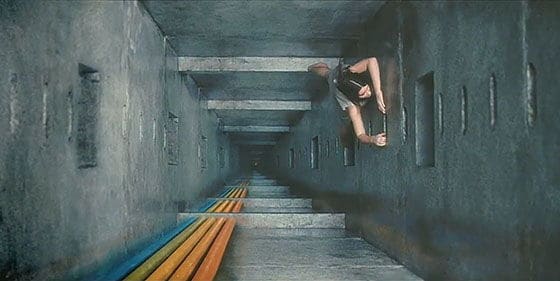 Beyond The Black Rainbow – Dr. Mercurio Arboria’s Institute of Insanity

One of my friends recently sent me a link to a trailer for a film I’ve never heard of called Beyond The Black Rainbow. The title doesn’t gave away much, and other than a vague notion of something artsy and perhaps vaguely related to Pink Floyd’s The Dark Side Of The Moon, I had no idea what to expect. Well, I’ve watched the trailer multiple times now with the intention of trying to understand what’s going on, and if anything I’m more confused than ever. This is one of the few times that I’m hoping you, our awesome readers, can shed some light on this great mystery.

The trailer starts out with a bit of strange footage and narration by a fellow named Dr. Mercurio Arboria, the founder of the Arboria Institute. After that, well… you’ll just have to watch. I warn you in advance though, that there’s a very good chance this footage will do your head in. There are moments where I feel an almost Kubrick-esque vibe, which quickly translates into nostalgia of 90s horror flicks such as Cube. Oh, and Daft Punk? Yeah, they seem to be there as well.

Beyond The Black Rainbow Trailer

Was that not a completely bat-shit insane trailer? The imagery was beatiful, and the music was absolutely fantastic. Other than that, though, I really had no idea what was going on. Out of frustration, I ended up doing a little bit of research on the film. The official website has almost no information, but IMDB claims the movie is about a woman trying to escape the Arboria Institute while heavily sedated; I’m guessing it’s the lady we saw crying multiple times in the trailer. Other than that, though, I didn’t find a lot to go on. IMDB claims that Beyond The Black Raindow is a 2010 film, and yet multiple sources list it as 2012 as well. I’ve certainly never heard anything about it before recently.

It’s here where I make a plea for information. If you know anything about this incredibly odd and strangely beautiful film, please leave a comment below and tell us about it.