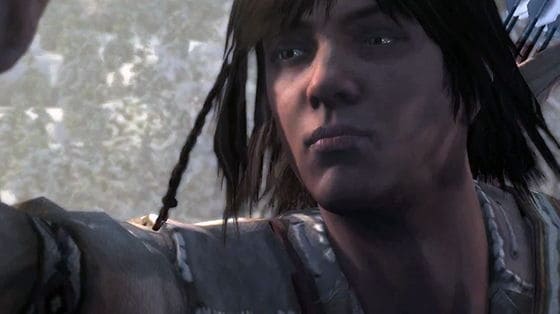 As children, most of us spend our time building forts, climbing trees, and playing in the mud. Connor had a very different childhood, though… one that involved developing of a very particular set of skills; skills that makes him a nightmare for people like… well… the British.

In this latest trailer for Assassin’s Creed 3, Connor takes a walk down memory lane. We’re shown bits and pieces of his childhood, and most interestingly, we’re shown a clip of him being accepted into a certain organization. It’s for that reason (and a few others) that I’m using a spoiler warning! There’s plenty of new footage, but it comes with a cost.

Out of all the AC3 trailers that Ubisoft has released over the last year, this one is by far the most dramatic in-game one. There’s a cinematic trailer and really struck a cord with me, but this one is a very close second for sure. It reminds me of a movie, and though that’s something I often rail against in games, I’m hoping (perhaps naively) that they’ll manage to combine the cinematic elegance of a film, with the gameplay that we’ve all come to know and love in the Assassin’s Creed franchise.

In a few weeks time, we’ll all have the opportunity to explore a world that Ubisoft has worked so hard to create these last few years. It looks to be bigger and better in every way, and if it’s not, well… let’s just say I’m going to be really pissed off. Hell, there might even be angry crocodile tears, and emo poetry.

Hard to believe, but it’s … out now Assassin’s Creed 3  arrived on October 30th for Xbox 360 and Playstation 3 (boo!), and on PC (yay!) on November 20th (boo!). The only question now is whether I can hold out the extra few weeks to play what I hope will be the best version of the game.

If you’re interested in picking up a copy, and I’m guessing you are, because just about everyone has a hard-on for AC, then you can order AC3 online for around $40 USD. The game has been our for a while now, and Ubisoft has patched the hell out of it, so it *should* be playable by this point.