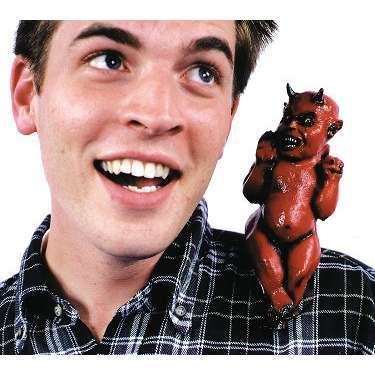 Since Eve met Adam women have been trying to determine whether their new male companion is a player or a relationship guy.  Are your palms getting sweaty at the prospect of deciding?  I’ve got good news for you… you don’t have to!  Find out why allowing yourself to be defined by her terms will never benefit you.

Women will have you believe that you can be only one of two things.  You are either a player or you are a relationship guy.

The player tag has a deeply negative connotation and is defined by women as the guy who simply enjoys dating and sex but never intends to commit to anyone.  To women, he is every attractive charming man that she’s ever fallen for and regretted later.  He represents the most alluring yet most dangerous object of a woman’s attention because there’s nothing emotionally fulfilling at the end of that rainbow.

The relationship guy is the polar opposite of the player.  He dreads dating, loves being in a relationship, enjoys long walks on the beach and cuddling and is unequivocally devoted to her from Date 1 if not sooner.  He is a rock of consistency, holds a steady job and is the guy her Mom would greet with an exhale of relief saying “finally” when she brings him home.  Unfortunately relationship guy is really boring, presents no challenge and frequently ends up in the “friend zone.”

How These Roles Developed

Read any article about politics and you’ll quickly realize that people like easily digestible absolutes.  It’s much easier to call someone a Liberal or a Conservative instead of understanding where they stand on individual issues.  Simplified labels are just easier to deal with and save people the effort of digging deeper.

These roles we’re examining (particularly the player role) are born out of women’s insecurities.  They’ve been burned before by the player and they know how susceptible they are to his charms.  This both excites and scares them and dismissing you as a player allows her to put a label on the exhilaration she’s feelings while simultaneously giving her a sense of personal growth that she’s identified her weakness sooner this time.

Why Accepting Her Defined Role Will Never Help Your Cause

Here’s where it gets even more troubling.  You can’t win by choosing to accept either the player role or the relationship guy role.

If you’re the player, you’ll benefit from being viewed as dangerous and exciting but you’ll be viewed as incapable of a relationship and not truly someone she’d be able to date seriously.  If you accept her classification as relationship guy, you’ll be instantly boring and viewed as about as likely to get her hot as her coffee table.  If she feels you are just looking for someone to be with, she will cease to feel special.

There’s no way to win in this game.  So why play it?

So What Do You Do?

You didn’t think I’d leave you hanging without a suggestion did you?  It’s simple.  Don’t allow yourself to be defined by someone else.  In what other area of your life do you do that?  So why would you allow that to happen in your dating life?

When your date attempts to back you into a classification corner simply tell her you enjoy dating on sites like RomanceTale and meeting new people but just haven’t found the one who’s your perfect match.  Done.  Don’t feel guilty about dating and enjoying it.  I’ll bet she’s doing the same exact thing and is testing you.

Be strong and be confident in yourself.  Be ready for a relationship with someone whom you truly connect with, but enjoy the process of meeting new people…that is until that amazing woman saunters into your life who makes you forget about everyone else.

Alright boys, it’s Holiday time and this is prime time to find that special woman in your life.  You can do this at Holiday parties, or at the grocery store but why not also do it from the comfort of your own laptop?  What better way to do that then tapping into the world of online dating’s massive audience with an approach that will allow you to filter out the riff-raff and attract the perfect match for you?

3 comments on “Are You A Player or Relationship Guy?”