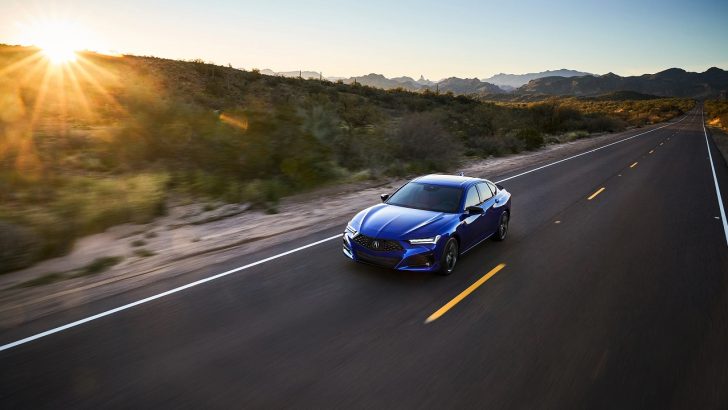 The Acura TLX was born in 2014, as a result of the mashing of the Acura TL and Acura TSX. For 2021, Acura has released an all-new 2nd generation of the TLX, the previous generation TLX did get a refresh for the 2017 model year, which I didn’t review surprisingly, I had reviewed the pre-facelift version on a couple of occasions.

Acura has stopped production of the bigger RLX, so the TSX is the new flagship sedan. Although a majority of the sales of Acura vehicles come from SUVs (which is the case with pretty much every carmaker nowadays), it’s good to see Acura is still spending money on producing sedans.

Last week I had the opportunity to review a 2021 Acura TLX A-Spec, below are my thoughts on this all-new entry-level luxury sports sedan.

The 1st generation TLX was offered with two engine choices, which is still the case with the second generation TLX, however, the 4-cylinder engine is the standard for all of the trims except for the Type-S, which makes a comeback after a decade-long sabbatical.

The 2021 Acura TLX is a decently fun car to drive, it comes with four driving modes: Normal, Comfort, Sport, and Individual. I didn’t particularly notice a difference between the Normal and Comfort driving modes, however, putting it in Sport mode you definitely feel the power. I wouldn’t call the TLX a sports sedan, it’s almost there but not quite. I’m guessing Acura is saving all the goodness for the TLX Type S.

The TLX has decent driving dynamics, but it is heavy and you do feel the weight of the car. However, the SH-AWD does make it quite fun on twisty roads, you can literally feel the car’s outside wheels pushing you into the corner. The steering feel is pretty numb and there isn’t much weight to it in Normal/Comfort modes, the Sport modes gives it a decent amount of weight. The Sport modes also adds simulated engine sound via the speakers, which I’m not a big fan of.

Personally, I think the Acura TLX A-Spec looks the part but doesn’t quite perform as well as it looks. The Type S should take care of that.

Comparing the second generation TLX to the one I reviewed a few years ago, you can see a lot of changes between the two cars. But with the 2017 refresh, the new one has a family resemblance to that car and the overall family of Acura vehicles. The 2021 TLX is a much larger car than the one it replaces, it’s 3.9” longer, over 2” wider, and about ½” lower than the car it replaces. The TLX also rides on a brand-new chassis that is exclusive to this car. You can definitely notice how wide and low this car is, giving it a very sporty and aggressive look. I absolutely loved the way the 2021 TLX looked, especially in the A-Spec trim.

The TLX features a long hood with a good-looking face. There’s a large grill at the front, it’s large enough to be eye catching but not too big to be an eyesore. Our A-Spec came with the blacked-out chrome front grill trim, along with the trim around the windows. The “Jewel Eye” LED headlights look sharp and feature (chicane) LED daytime running light bars around them, our car also came with LED fog lights. The rear features dual exhaust tips, and a black lip spoiler and smoked-out taillights on our A-Spec trim. The Spoiler and smoked-out lights are exclusive to the A-Spec and Type-S, and give the car quite a sporty look.

Normally I’m a big fan of clean, minimalist interiors. The TLX’s interior is definitely not minimalist, but I personally like it. The layout is similar to the Acura RDX’s interior, which I also liked.

At the center you’ll find a 10.2” display, standard on all trims, which can be controlled by the trackpad on the center console. It’s quite far to reach from the driver’s seat, but that’s by design, because it’s not a touchscreen. The trackpad to control it has two separate sections, which correspond to the two sections of the infotainment screen. The bigger trackpad controls the bigger part of the screen and the smaller trackpad section controls the smaller part of the screen. The trackpad can be used to write down letters when you’re entering an address. This is good in theory but not as good in practice, I found it extremely difficult to type anything and resorted to either picking each individual letter with the trackpad, which is quite time consuming or using voice command, which didn’t always understand what I was saying.

The trackpad is like a mousepad on a laptop but it also has an added feature. Using the trackpad normally, you just slide your finger around to move the “cursor” on the screen to the desired function. The added feature is when you put your finger on the mousepad, say top right corner, the pointer on the screen will appear in the corresponding position on the screen, the top right corner. So instead of sliding you finger/cursor from one end of the screen to the other, you can just click that part of the trackpad and the corresponding part of the screen will get clicked. It doesn’t take much time to get used to this system.

Below the 10.2” screen is a separate area for the climate control system with physical buttons and a small LCD screen, which is great as you don’t have to go through multiple menus to change the fan speed or temperature. Below this section is a large dial for switching between the four driving modes. Below it are the buttons for the transmission, I’m personally not the biggest fan of using buttons for the transmission, but it does save space.

The gauge cluster features a pair of analogue gauges, which are white-ish/silver colored with red numbers on our A-Spec trim, with a small TFT screen in between. The small screen shows different info like trip computers, fuel economy, lane keep assist etc. The gauges are easy to read and the little screen does a good job of showing the relevant information.

The remainder of the interior, especially the dashboard, is quite angular. It gives me the same vibes as the exterior.

The interior is quiet and comfortable, there is some engine noise making its way into the cabin. I can’t say it’s a pleasant sound, the 4-cylinder engine doesn’t sound that good. There isn’t much road noise coming into the cabin. The ride quality is quite good and I’m sure it’s even better on the two higher trims with adaptive suspensions.

The TLX may have grown in overall size, however, I found it to be tight on interior space. With the front seats set for my 5’ 8” frame, the rear seats just had enough legroom for me and there was about an inch of headroom. The back seats will be a tight fit for anyone taller than me. I think a lot of the car’s increased length went into the long hood, which looks quite good, but it would’ve been nice to have more interior room, especially in the back seats, and for a car this size. The overall size of the TLX is encroaching on mid-size sedan, however, the interior has compact sedan space.

The 2021 Acura TLX comes quite well equipped even in the base trim, there are some additional items available on higher trims. Below are highlights of the available equipment.

After spending a week with the 2021 Acura TLX A-Spec, I have come the conclusion that this is a really nice package and is an improvement on the first generation TLX. I find it to be a quite attractive looking car, and it looks extremely sporty with its new lower and wider stance. However, if I was looking for a sports sedan and it had to be the TLX, then I’d definitely need to come up with some extra cash to buy the Type-S.

Originally published on July 9, 2021 in Cars