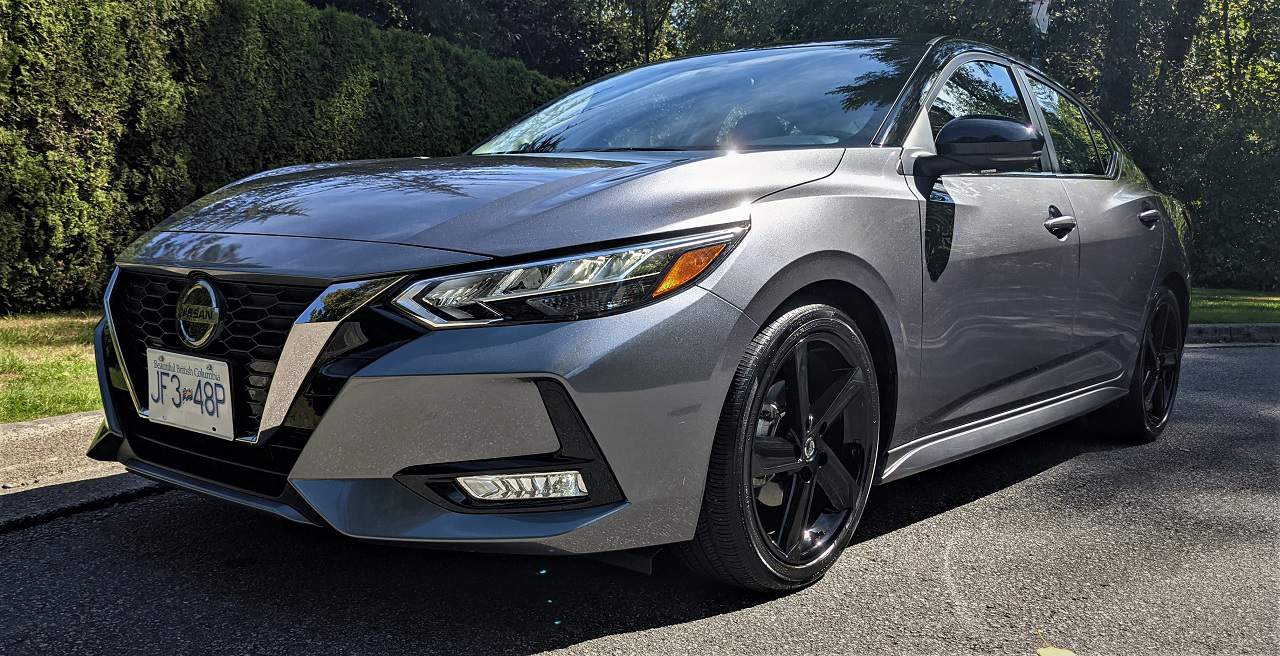 The Nissan Sentra has been on sale in North America since 1982, replacing the Datsun 210, and was one of the main competitors in the compact class that consisted of the all-mighty Honda Civic and Toyota Corolla. Although it never reached the sales numbers of the Civic and Corolla, it sold enough units to still keep getting refreshes and all-new models over the years.

The current generation is the 8th iteration of this car, which went on sale as a 2019 model. It’s also no longer classified as a compact car; it has grown in size to be a midsize car. Last week I had the opportunity to review a 2021 Nissan Sentra SR, which just happens to also come equipped with a manual transmission.

All three trims of the Sentra are equipped with naturally aspirated 2.0-liter 4-cylinder engines, producing 149 horsepower at 6,000 rpm and 146 pound-feet of torque at 4,000 rpm. Power is sent to the front wheels via a 6-speed manual transmission or the Xtronic Continuously Variable Transmission.

Unlike the 2002 Sentra SE-R I used to own; the 2021 Sentra SR is not a sporty car. At first, I thought the “SR” trim was maybe a more driver-oriented version of the normal Sentra, especially since it was equipped with a manual transmission, but I was completely wrong. The Sentra SR is a normal commuter car, with a bit of sportiness added, but just visually. It features bigger rims, a decklid spoiler, and some faux carbon fiber trim on the interior (although I’m not sure if the “carbon fiber” is included in the other trims).

As you’d expect from a 149 HP car, the Sentra isn’t a fast car by any means. It does the 0 – 60 mph sprint in a pedestrian 9.2 seconds, which is slower than the competition, which includes some big names like the Honda Civic, Toyota Corolla, Mazda3, and the Hyundai Elantra. However, with the 6-speed manual transmission, you do get the sensation of accelerating faster than you actually are. The transmission is okay for daily driving; however, it feels quite rubbery and doesn’t have the crisp shifts of the SE-R I so fondly remember.

The 2021 Sentra does a perfectly fine job of keeping up with city traffic and is not bad on the highway. Passing slower cars isn’t too big of a deal, you just have to drop a gear or two and off you go. I think the CVT equipped Sentra’s would struggle a bit and the engine would get quite whiny when passing on the highway.

The Sentra may not be a performer, but it’s a pretty good-looking car in my opinion. It borrows a lot of its styling from the larger Maxima and Altima sedans but it has toned down these styling elements, which work better on the Sentra.

At front is the now-familiar Nissan V-Motion grill, which is place really low. The entire front of the hood slopes down, giving the car quite a sporty look. The side profile is clean and looks long and sleek, feature the “floating roof” and two-tone paint. The rear has sleek looking taillights and is overall a clean looking rear end. Our car came with the optional decklid spoiler, which added a bit to the sporty nature of this car.

The interior on the 2021 Nissan Sentra features a simple layout, it’s a clean layout and is easy to understand and it takes no time to get used to. There is a liberal use of soft and hard plastics, the top part of the dashboard features soft-touch plastic that actually looks pretty good. The interior also features orange stitching throughout the cabin, the stitching is included on the dashboard, door inserts, steering wheel, center console, and seats. The stitching gives the Sentra a sporty and luxurious look.

The infotainment system features an 8” display, which has average responsiveness to the touch. Below the screen are three air vents, reminiscent of Mercedes-Benz interiors. Below this area is a separate section for the climate control system, which is quite easy to use. Below is a small storage area with USB ports. The gauge cluster features two analogue gauges with a small TFT screen between them that displays trip info, fuel consumption etc.

The interior is a comfortable place to be in, especially the NASA-inspired Zero Gravity seats, these seats are extremely comfortable and would come in handy on long trips. The interior has about the average amount of noise for a car in this segment. The rear seats are quite roomy, I had many inches of leg/knee room, sitting behind myself; for reference I’m 5’ 8” tall.

Although the SR trim is not the most feature-laden version of the Sentra, it is stilly decently equipped. In order to get leather seats, 360-degree cameras, and Bose sound system, you’ll need to upgrade to the SR Premium trim. Below is a list of what’s available on the 2021 Sentra SR 6M trim:

Although the Nissan Sentra SR wasn’t as sporty as the old SE-R I used to own, I still commend Nissan for offering a manual transmission option. Manual transmissions are not as popular among the general public, but for us car enthusiasts, they’re a must and even more desirable when you consider the alternative of CVT. Maybe Nissan will give us an SE-R version of the 8th generation Sentra at some point in the near future, not likely but one can always hope.

The 2021 Nissan Sentra is a good looking vehicle in my opinion, it is certainly one of the better looking Sentras in the last decade or so. It drives well, there is a fair bit of equipment available, and it won’t hurt the pocketbook too much. If you’re in the market for a compact/mid-size sedan, don’t forget to have a look at the Nissan Sentra.

How to Boost Your Automotive Sales in 2021 and Beyond