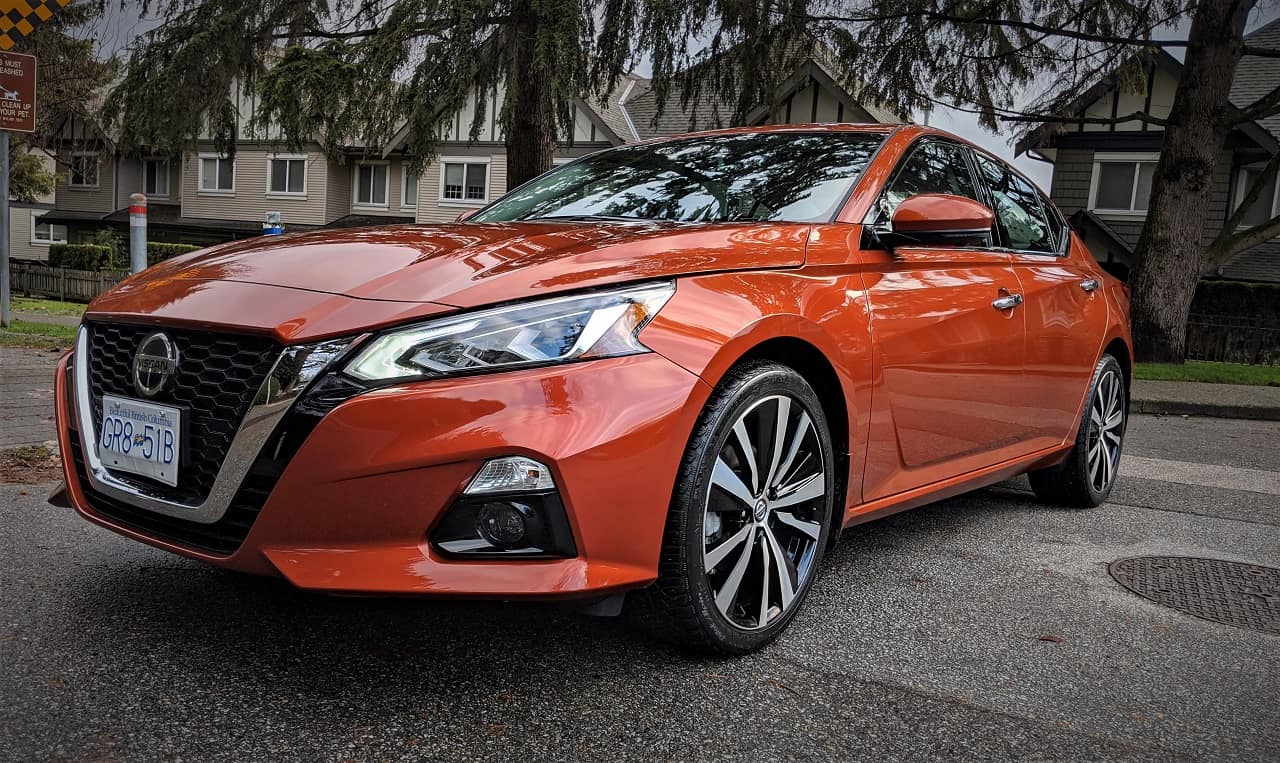 The midsize car segment was once a very highly contested battleground for automakers, before CUVs took over. This segment still has a good consumer following and there are a lot of choices for customers that want the space but don’t want an SUV/CUV. The leaders in this segment were and are, the Toyota Camry and the Honda Accord, but there are other worthy choices like the Mazda6, Hyundai Sonata, Kia Optima, Subaru Legacy, VW Passat, Chevy Malibu, and the Nissan Altima.

I spent many of my late teenage years driving around in my family’s 1998 Nissan Altima, which I thought was cooler than the Accord and Camry because it was sportier than those two vehicles. The Altima was the sporty alternative to those two juggernauts, although over the years the Camry and Accord have become sportier.

Although CUV/SUVs are hot sellers, it’s still great to see automakers offering sedans/hatchbacks. Nissan offers 6 different CUV/SUVs, from the small Nissan Kicks to the extra-large Nissan Armada. But thankfully they also offer 8 cars, which include sports cars, hatchbacks, and sedans.

The Nissan Altima has been on sale since 1992, with the current sixth generation going on sale as a 2019 model. Starting in 2020, all trims of the Nissan Altima come with AWD as standard equipment.

In Canada, the 2020 Nissan Altima is offered in three trims. The base S trim starts at $28,098, the SV has a starting price of $31,598, and the top of the line Platinum starts at $35,098. Other than paint and accessories, there are no additional packages that can be added to the three trims.

In Canada, the 2020 Nissan Altima is offered with a naturally aspirated 2.5-liter 4-cylinder engine with direct injection, producing 182 horsepower at 6,000 rpm and 178 pound-feet of torque at 3,600 rpm. Power is sent to all-four wheels via Nissan’s Xtronic CVT (Continuously Variable Transmission).

There’s a more powerful engine offered in the United States, which is a 2.0-liter VC-Turbo (Variable Compression Turbo, we saw on the Infiniti QX50). This engine produces 248 horsepower at 5,600 rpm and 273 pound-feet of torque at 4,000 rpm; this engine is only available on the FWD Altima. Maybe Nissan will offer the more powerful engine in Canada in the future.

Back to our Canadian engine, according to Nissan, the 2.5-liter engine should consume 9.1/6.5 Liters/100 kilometers in city/highway driving on the S and SV trims and 9.3/6.7 L/100 km on the Platinum trim. I’m not exactly sure why the Platinum is less efficient, maybe it’s a bit heavier and it does have bigger 19” wheels, which might have a negative effect on fuel consumption. After a week of city and highway driving, the onboard computer showed 10.1/7.4 L/100 km in city/highway driving. Which is pretty close to the claimed numbers, having winter tires, heated seats/steering wheel, and the climate control does increase fuel consumption.

Driving the AWD Altima, the first thing I noticed was the added grip provided by the AWD system. Unlike FWD cars, the AWD Altima felt much more stable and the system quickly sent power to the wheels with the most grip. Unfortunately (or fortunately), it didn’t snow while I had the Altima AWD for our review, so I couldn’t really test how well it would do in the snow, which is a major purchasing factor for Canadian consumers and our snow filled winters. However, the wet weather performance was really good, so I’m expecting good things in the snow; having winter tires installed should also help a lot.

Driving the Altima around town is neither boring nor fun, it’s a car that gets the job done and will get you from point A to point B. I felt the new Honda Accord and Mazda6 are much sportier than the Altima. The steering feel is very light, I would’ve liked a bit more weight to it, it doesn’t have to be as heavy as the Mazda6’s, which I love (I personally own a Mazda6), but a bit more weight would’ve added some sportiness to the Altima. I did love the weight of the steering on the Nissan Maxima, which is by far the sportiest mainstream mid-size sedan I’ve driven this year.

On the power front, the 2.5-liter engine provides adequate amount of power; I didn’t feel the need from more power in the city or on the highway. The Xtronic CVT has simulated gears, but nothing like the Maxima’s, which is my favorite CVT. The CVT on the Altima feels more like a traditional CVT, which is not much fun and has that droning effect, especially apparent when you’re accelerating at highway speeds.

The ride quality is quite comfortable on the Altima and it handles well; the car keeps its composure on bumpy roads and handles well in corners. Again, the suspension setup is middle of the pack, not too floaty and not sporty either, just average.

I think the 2020 Nissan Altima is a pretty decent looking car. Taste in styling is subjective; some might hate the “floating pillar” treatment on the c-pillar of the Altima, I personally didn’t mind it. The overall styling is modern, it’s interesting looking but not over the top. The front features a very large grill (some of which is blocked off) with a chrome “V-Motion” grill and sharp looking LED headlights (standard on the SV and Platinum trims). The side profile is clean with a few body lines giving it more character, the rear end features dual exhaust tips, a diffuser looking thing, and sharp looking taillights. Our review car came with 19” rims (16” and 17” wheels are standard on the two lower trims), which looked good on our brightly colored orange (officially called Sunset Drift) car.

The interior on the 2020 Nissan Altima features a very clean layout, that’s really easy to understand and get used to. I liked the simplicity of it, it’s minimalist but you don’t have to go through menus after menus to find what you’re looking for, every thing is within reach and is available at the touch a button. For example, the start button is placed right next to the gear lever, a couple of inches above it are the buttons for heated steering wheel, heated seats, and the climate control. Starting the car, hitting the heated seats/steering wheel button, and shifting into gear all happens within inches of each other, which makes life just a little bit easier.

Above all of these buttons is an 8” touchscreen, which has improved graphics over the recent Nissan and even Infiniti vehicles I’ve reviewed recently. The touchscreen is responsive and works well, there are small buttons under the screen that let you change between navigation, audio, and cameras. The 2020 Altima features rear, side, and front cameras; I don’t think I’ve ever seen a non-luxury sedan with a front facing camera. In the gauge cluster there are two analog gauges for the speedometer and tachometer and in between them is a 7” screen which displays various things like trip meter, fuel consumption, navigation directions, music/radio etc. This screen is similar to what other manufacturers are offering and it works well.

The overall feel of the interior is upscale, with mostly soft touch materials. There’s faux wood trim on the dashboard, which separates the top part of the dashboard from the bottom. Our review car came with leather seats, which are only available on the top trim. The seats come with 8-way power adjustable driver’s seat with 2-way power lumbar, this is standard on all trims. The Platinum trim adds 4-way power adjustable passenger seats. These seats are heated, available on the top two trims only, but they’re not available with cooling, which some of the competition offers. The seats were extremely comfortable, I absolutely loved the support provided to my lower back, Nissan’s Zero Gravity seats are known for being comfortable and I wish more carmakers would use seats like these.

There are a couple of items I would’ve liked to see on the Altima, items that are offered by some of the competition, include all four windows with one-touch auto up/down (this was only available on the front two windows) and rear heated seats. These are not deal breakers, but would’ve been nice to see.

The interior is fairly quiet and comfortable. The Altima is smaller than the Accord and Camry, but I found there to be plenty of room. Setting the seat for my 5’ 8” frame left many inches of room in the back seats, even taller drivers/passengers will find plenty of room in all seats. The headroom was also a non-issue, I felt comfortable sitting in the front and back seats, never even coming close to touching the ceiling with my head.

Like most cars in this segment, the Nissan Altima can be loaded up with many modern-day tech, safety, and convenience features. Our review car was the top of the line Platinum trim, so it was loaded up with all the features below, however, the lower trims are well equipped; I think the sweet spot is the SV if you’re looking for a well-equipped Altima but don’t want to spend too much money.

In terms of size, the Nissan Altima slots in the middle of the pack. I’d say it also slots right in the middle in terms of power, styling, and handling. It’s a good package overall, but could use some improvements to compete with the big guns in this segment, the Accord and the Camry. However, overall, I was satisfied with the way it performed and the fact that AWD is standard on all trims gives it quite an advantage over the competition.