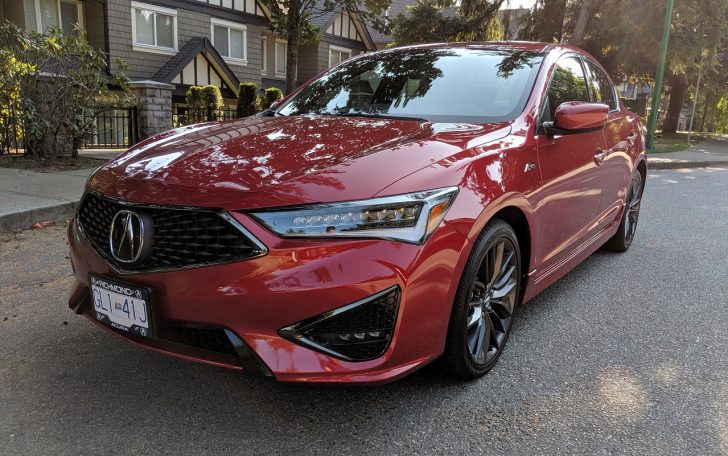 The Acura ILX has been in production since the 2013 model year, before that it was called the Acura CSX. But with the name change, the car became a distinct model rather than a rebadged Honda Civic. This generation of the Acura ILX has been on sale for pretty long time, in automotive years, so Acura decided to give it a little makeover.

The last time we reviewed an Acura ILX was in 2016, it was a decent looking car, but the new 2019 ILX looks much better in my opinion, with more aggressive styling that makes it look like the bigger TLX. The front fascia is much more aggressive with a grill that looks like what you’d find on the TLX, RDX, and MDX. Like these other models, the Acura “A” is much bigger, you’ll know this is an Acura from quite a distance.

The new bigger grill is surrounded by blacked-out chrome, which matches the black chrome wheels. The headlights are also a new design and look bigger, with a wraparound daytime running lights that look like a stylized check mark, this design is also applied to taillights. The taillights are also bigger and make the rear end look much more significant. The rear bumper is also new with more curves. Overall, I think the new Acura TLX A-Spec looks quite good and very sporty, especially in the red color on our review car.

Powering the 2019 Acura ILX is the same 2.4-liter 4-cylinder engine found on our previous review car, producing 201 horsepower at 6,800 rpm and 180 pound-feet of torque at 3,600 rpm. Power is sent to the front wheels via an 8-speed dual-clutch transmission with paddle shifters on the steering wheel.

Driving the Acura ILX is quite fun, the engine has a good amount of power for city driving, highway driving is also good but if you need to pass a slower vehicle in a hurry, just mashing the throttle isn’t enough to move the ILX fast, dropping a couple of gears is needed in these situations.

According to Acura, the ILX should consume 9.9/7.0/8.6 L/100 kilometers in city/highway/combined driving. The onboard computer showed 8.9 L/100 km with about 70/30 city/highway driving. Since this is a sporty car, I didn’t drive it in my usual smooth driving style, which had a bit of effect on fuel consumption.

I didn’t notice any changes in the interior compared to our 2016 review, overall the interior is a nice enough space. There is a mix of hard and soft plastics. The interior is roomy and is fairly quiet. The interior layout is easy to understand and the dual screens are easy to use. I complained in my review of the 2019 Acura RDX about the graphics on the infotainment system and the navigation display, the ILX uses the same look, I’m not a big fan of these graphics but I’m not as upset by this on the ILX since it’s a much cheaper car. However, again, when I plugged in my phone to display Android Auto maps, the graphics changed to the much nicer Google maps. Again, I’m not computer programmer/designer, but if a system can display the nicer Google graphics, wouldn’t it be an easy task to upgrade the graphics on at least the maps? Or maybe no one else has complained about it.

Like the RDX, I found it difficult to talk to the “voice command” for adding addresses, I found the voice the communicated with me very robotic and annoying.

Other than my issue with the graphics and voice command, which might not be a big issue for other people, I think the Acura ILX is a pretty good entry level luxury sedan. It’s now much better looking, it’s pretty fun to drive, and interior is roomy enough.

Originally published on August 7, 2019 in Cars