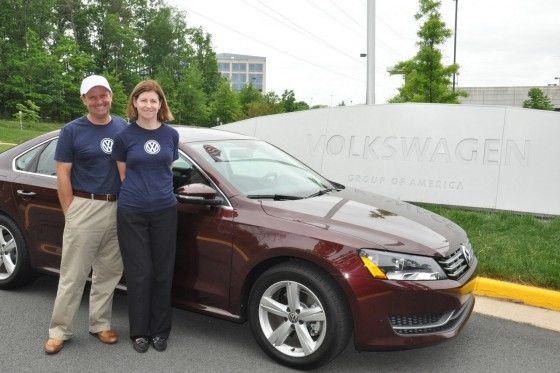 John and Helen Taylor, most of us have never heard of these two people but they are well known in some circles. These two love birds actually hold over 90 world records related to fuel economy and vehicles. Their latest record is for driving an incredible 1,621.1 miles through nine states on a single tank of fuel (diesel).

The vehicle used for this journey is the all-new 2012 Volkswagen Passat TDI SE sedan with a six-speed manual gearbox. They beat their previous record of 1,526.6 miles in Europe by 99.5 miles which was achieved with the Volkswagen Passage 1.6 BlueMotion diesel. Of course these guys aren’t your average drivers and they have techniques for achieving maximum fuel economy.

The 2012 VW Passat TDI produces 140hp and 236 lb-ft of torque from its 2.0-liter turbo diesel engine. With the manual transmission, the vehicle is rated at 43mpg on the highway. During the three day journey, they Taylor’s were able to achieve an average fuel economy of 84.1mpg which ended up costing only 4.65 cents per mile according to Volkswagen. That’s almost double the fuel economy! That’s extremely impressive.

To make the drive realistic as possible, 120 pounds of luggage was also added to the car as well as only driving during the day time to simulate normal traffic conditions as with any road trip. The couple drove the car 14 hours per day with the journey starting in Houston, Texas and ending in Sterling, Virgina.

If you want to pick up one of the most fuel efficient cars on the road, check the Passat out at VW. I’m curious to know what kind of numbers they can achieve with the new Mazda’s and their SkyActiv Technology?