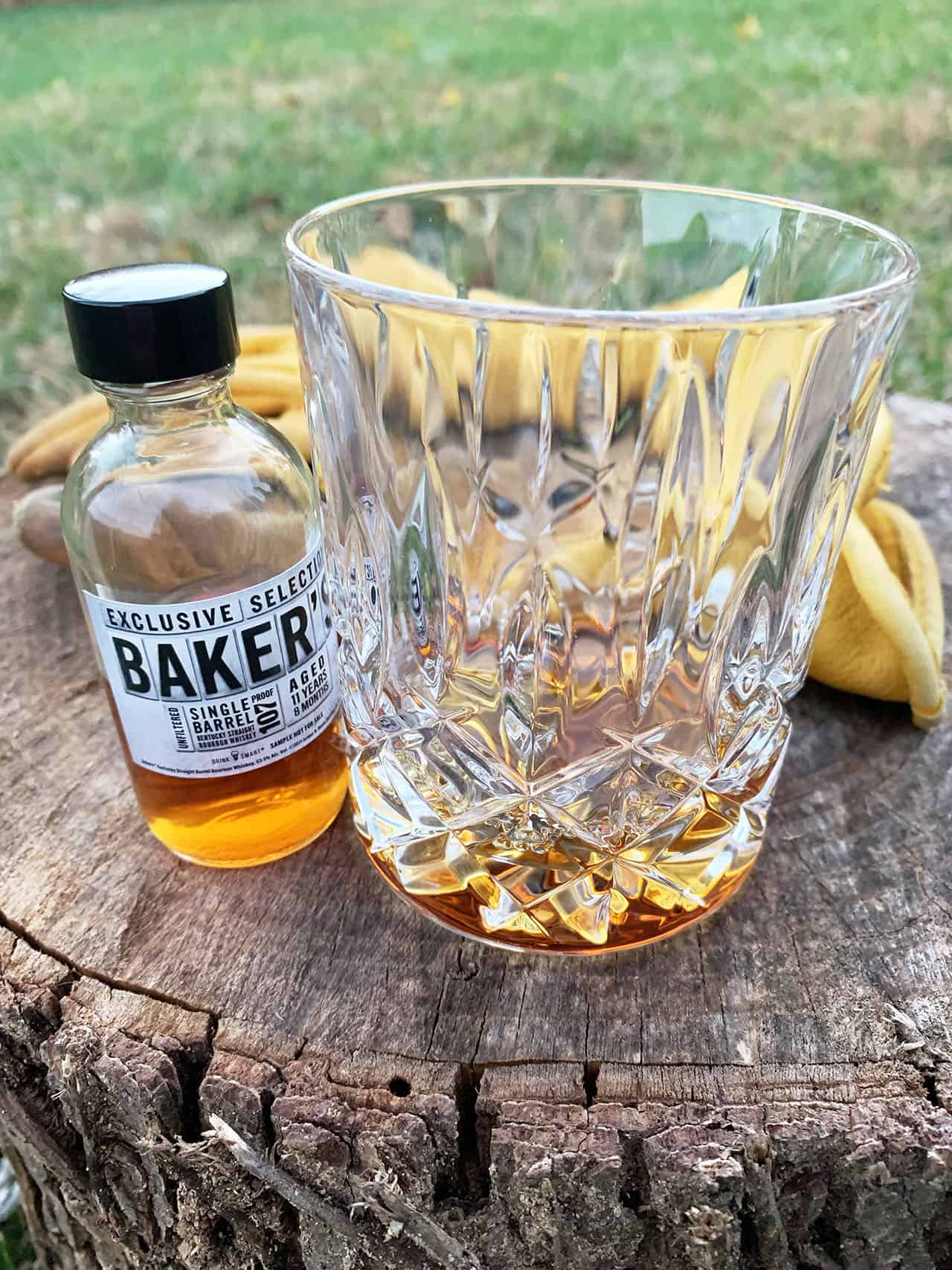 I have just built a fire with wood that I chopped not ten minutes ago. The girlfriend is getting herself a glass of wine so she can join me out here in the backyard. I’m having this whiskey that Baker’s was nice enough to send me. Baker’s “Exclusive Selection” (E.S. hereafter) is another star in the Jim Beam galaxy, which means that it’s a Suntory product, ultimately. It’s a shade older than my oldest kid (11 years, 8 months) and it weighs in at an unusually specific 107 proof.

All that being said, it could be that there’s some magic in that 107 number. You would never guess that this stuff is flammable. The nose almost gives it away. There are strong overtones of caramel, but there’s just enough edge to remind you what you’re drinking. It is surprisingly smooth, with only a little bit of that boozy electricity up and down the sides of the tongue. The flavor has a great deal of vanilla with just a suggestion of fruit, and it leaves you with some Oakey notes at the end. As a rule whiskey is pretty heavy stuff, but this is not. Baker’s E.S. lacks that overwhelming quality that typifies the spirit, and for this reason I find myself wondering if this wouldn’t be a real good summer whiskey.

This is a quality product. It’s very good, and checks all of the boxes that your typical whiskey aficionado is looking for. However, I have an admittedly unusual relationship with alcohol. If I’m being totally honest this stuff suffers from not actually being a little worse than it is. I find the thing that makes you remember a particular label is oftentimes similar to the things you remember about a problematic ex. Do I like it? Sure. Will I get caught in the club’s bathroom with a glass of this, neat? Nah.

Of course I’d be doing it wrong if I didn’t put a beverage through the whole process. Having done just this, I find myself wondering if water has the same effect on whiskey that whiskey has on us. You splash a little water in this and it goes from Very Reliable Bourbon to All Embracing Earth Mother. It’s like this wave of butterscotch that kinda rolls over you and ends with some woody peat that almost suggests Scotch. Well, okay. Scotch with a dash of brown sugar, but it’s in there. Now it’s not just agreeable, it’s too agreeable. See? There’s the troublesome ex. I found them. This further underpins my opinion that this is a summer whiskey. I’m not going to try this since, well… it’s mid-November and I’m sitting in my backyard, but a glass of this with ice sounds like a real good idea on a hot night. Furthermore, I can see the kind of Mint Juleps that will get you phone numbers coming out of a bottle of Baker’s E.S.

I personally don’t need any phone numbers, but I’ll definitely get a bottle of this stuff to test out my Mint Julep theory when it gets a little warmer out here.

Way back when, I started off as a music nerd and marketing guy. These days, I split my time between travelling the world, fixing up old houses and writing about the things that excite me, including home improvement, movies and living the good life. If you want to debate the best tartare in Paris over a dry martini, I'm your man.

Best Trucking Companies for Drivers in the USA

Heard of Kombucha? Here’s How to Jump on the Healthy Cocktail Trend