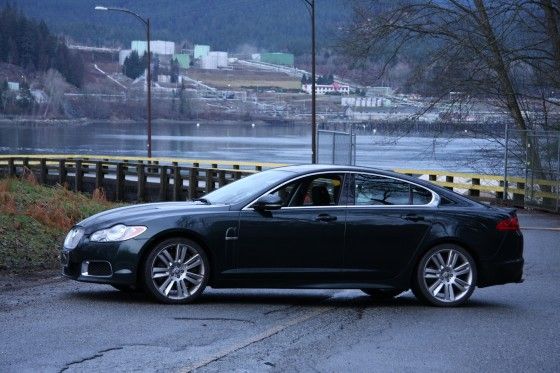 For our second official car review/test drive, we got a chance to play with the deliciously good Jaguar XFR.  This is no ordinary four door family sedan: it comes with more horses than the Calgary Stampede, and it constantly urges you to go hunting for BMW M5’s and Mercedes AMG’s, which I did.  I spent two and a half days looking for those German thoroughbreds, but I guess they migrated south for the winter.

The Jaguar XFR is powered by a 5.0 liter supercharged V8 engine that produces a supercar-like 510 horsepower at 6,500 rpm and 461 pound-feet of torque at 5,500 rpm.  That’s more horsepower than the all new Porsche 911 Turbo and the outgoing Ferrari F430; not too shabby for a “sedan”.  All that power is sent to the rear wheels via a 6-speed automatic transmission with paddle shifts.  The XFR sprints to 60 miles per hour in a very quick 4.5 seconds and can reach an electronically limited top speed of 155 mph, but it can actually go over 165 mph. I didn’t push it to that mark because I didn’t want to end up in jail and I didn’t have access to a track, but various magazines have taken it over its supposed limited top speed.

In 2009 I drove the regular Jaguar XF which comes with “only” 300 horsepower. The only complaint I had with that car was the lack of take-off power from standstill; I didn’t have that problem with the XFR.  This car goes like hell and spins the rear tires on demand.  As it takes off from the traffic light, the objects in the rear view mirror get smaller, faster than in any car I’ve driven. 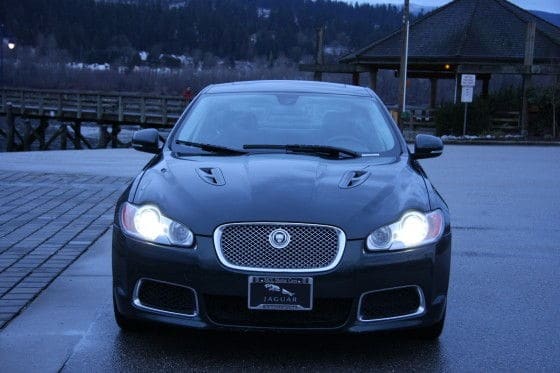 Unlike the Jaguar XJ I test drove last time, I instantly loved the styling of the XF. It really does look like a four-door sports car and is leaps and bounds above the car it replaces, the S-Type.  Of all the so-called four door sedans, the XJ looks the best and the R version is even better with its lower stance, bigger wheels, and the subtle spoiler on the trunk.  I’d take the XFR over the M5 any day purely based on style.

The Jaguar XFR features a very simple clutter-free interior with soft touch materials everywhere- even the dash is covered in leather, just the way we like it.  The center console features a few buttons for the climate control and the stereo which can also be controlled via the touchscreen located above them.  The touchscreen features a navigation system, controls the stereo and climate, and also acts as a backup camera which comes in very handy when backing out of parking stalls, because it is pretty hard to see out of the sloped rear window.  The driver and front passenger get very comfortable bucket seats, and they hold you very well as you drift sideways through corners.

Just like its bigger brother, the XFR has a very quiet ride but the suspension is much tighter, because this is the sporty model.  I actually prefer the harder suspension; it lets me feel the road better.  The suspension is hard, but the ride is very comfortable and the car goes over bumps like a champ.  Because of the high level of sound deadening, unfortunately you don’t get to hear the beautiful exhaust note that the supercharged V8 makes; you need the windows open to hear the sound, which is pure muscle car.

The Jaguar XFR will make you feel like a race car driver. It has a constant spell on you and makes you want to drive all day without any particular destination.  It is the ultimate “sports car” for the man that wants sophisticated good looks and likes to break the speed limit whenever he chooses, but still needs the extra seats to carry around the kids or take clients golfing.  Mercedes E55’s and BMW M5’s have a real challenger now and it costs thousands less and looks a lot better, in my opinion.

We would like to thank MCL Motor Cars for providing us the Jaguar XFR to test drive, it was a hell of a weekend.