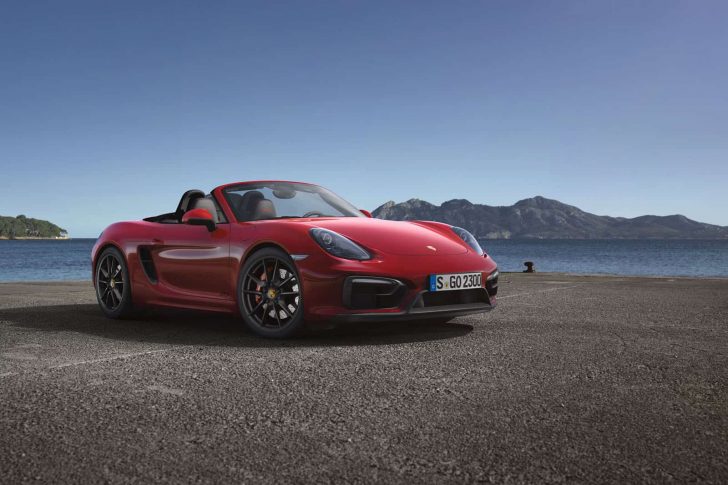 The Porsche Cayman and Boxster sports cars are not the most powerful cars offered by Porsche, because of that some people go as far as calling these “chick cars”.  But people that really know how to drive and appreciate fine German engineering, really like these cars and the way they handle and their perfectly balanced driving dynamics.  I personally like the Cayman, the Boxster not so much… not that I hate the Boxster, but if I had to choose between the two, I’d pick the hardtop.

Both GTS models come standard with the Sports Chrono package and PASM active suspension; these are optional on lower models.  The cars are equipped with 6-speed manual or optional 7-speed dual-clutch PDK 7-speed gearboxes.  When equipped with PDK and Sports Plus button activated, the Boxster GTS does the 0 – 60 mph sprint in 4.4 seconds and Cayman GTS does it in 4.3 seconds, with top speeds of 174 and 177 mph respectively.

The interiors on both cars have been upgraded with sports seats that come with leather and Alcantara inserts.  The exteriors see minor upgrades with redesigned front and rear bumpers; 20” blacked out wheels, and blacked out xenon headlights.

The Porsche Cayman and Boxster GTS will go on sale in May, with a starting price of $73,500 for the Boxster GTS and $75,200 for the Cayman GTS in the United States.  Via: Porsche