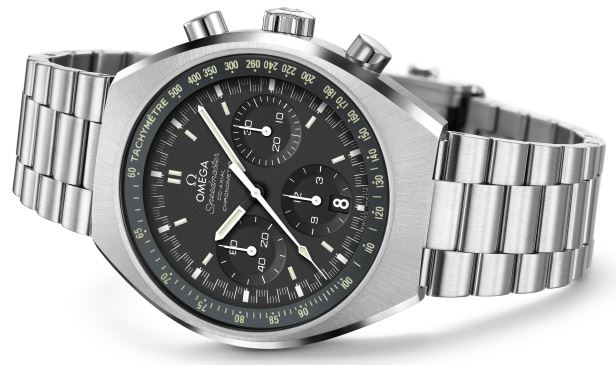 I don’t know if most guys my age have many hobbies, but personally, I don’t have any hobbies right now; I used to collect stamps when I was a kid (I know, pretty geeky), but I grew up, I lost interest in most things that take up too much time.  I do however have two passions, cars and watches.  I’m not a collector by any means, I’ll need a lot of cash to be able to buy the types of cars and watches I like, but I do have a handful of decent automatic watches, some of which I bought through Robert Gatward Watches.  I’d love to own some higher end watches and will definitely want to add a Rolex and Omega to my small collection.

And on that note, I’d like to introduce you to the Omega Speedmaster Mark II Reissue, a watch that combines classic looks with modern technology, something I really like.

The Omega Speedmaster Mark II Reissue is a re-take on the classic Mark II watch from 1969, that watch was powered by the same hand-wound caliber 861 movement that was at the heart of the Moonwatch.  The 2014 version gets updated with a self-winding automatic movement instead of a hand-wound mechanical movement, and it includes a luminescent tachymeter, a first in the Speedmaster line of watches.

The Omega Speedmaster Mark II Reissue watches come in two versions, a black dial with white highlights and a grey dial with orange highlights.  The watches come in brushed stainless steel cases with stainless steel bracelets.  The dials come with three sub-dials for the chronograph function and date windows at the 6 o’clock position.  The dials are covered with AR coated sapphire crystal.

In my opinion, these watches are pretty slick looking, especially the one with the grey dial and the fluorescent orange highlights.  The watches will be officially unveiled at 2014 Baselworld watch show, no word on prices yet.  Via: Omega