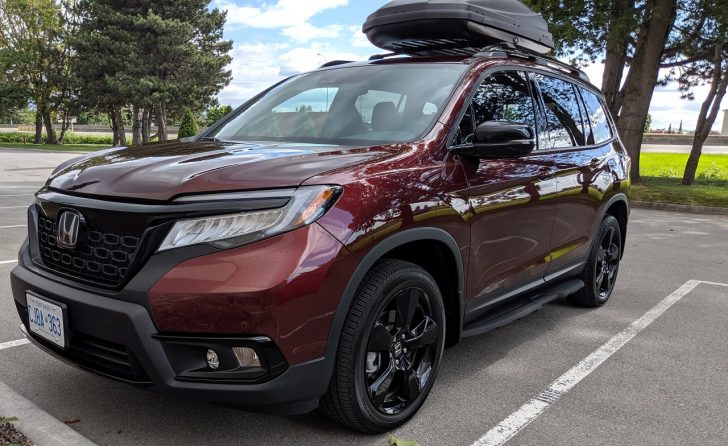 Honda recently added another SUV/CUV to their lineup, offering four (or five, if you count the Ridgeline). Honda’s latest offering is the all-new 2019 Passport, if the name sounds familiar, it’s because Honda used to sell the Passport back in the 1990’s and early 2000’s. I’m not sure why they stopped making it, as these types of vehicles starting becoming popular around that time, and of course, now there are more CUV/SUV offerings from carmakers than cars.

The Honda Passport fits between the CR-V and the Pilot, it’s based on the Pilot chassis but is 6 inches shorter and has more of a tougher off-road look to it.

For our weekly review, we had the 2019 Passport Touring, which has a price of $48,990, not including $1,795 for Freight & PDI, $100 for the Federal Air Conditioning Fee, and $25 for Tire Duty. Our review Passport also came with quite a few accessories, which are listed below:

Total for all accessories was $3,765, making the grand total $54,675 before taxes. It’s not a cheap vehicle, but not everyone is going to get the top of the line and add all these accessories.

The only engine offered on the 2019 Honda Passport is a naturally aspirated 3.5-liter V6, which is found on the Pilot and Ridgeline, producing 280 horsepower at 6,000 rpm and 262 pound-feet of torque at 4,700 rpm. Power is sent to all four wheels via a 9-speed automatic transmission.

Driving the Passport feels like a typical crossover, it has a nice comfortable ride, but is a bit more trucklike than the Pilot, which is what Honda is trying to go with. There is more than enough power produced by the V6 engine for city and highway driving. The Passport can tow 1,588 kg or 2,298 kg with dealer installed tow hitch.

The Honda Passport shares a very strong resemblance to the bigger Pilot, which it’s based on. There are slight differences, especially in the front fascia, with the Passport having a much bigger grill. The Passport is a good-looking vehicle, because of its shorter length (compared to the Pilot) and a bit higher stance, it looks very tough and off-road-y. The black trim around the vehicle and black 20” wheels add to the tough look and the roof box makes it look like you’re going on an adventure even when you’re just going to get groceries at your local supermarket.

I really liked the look of the 2019 Honda Passport, it really made me want to go camping. Honda’s design/marketing team has done a great job, because they’re marketing the Pilot as a vehicle that should be taken off-road on camping trips and that’s exactly how I felt about it.

The interior on the 2019 Honda Passport is pretty much identical to the Pilot and Ridgeline, which is a good thing. The interior is very clean and easy to understand and I really liked the graphics on the infotainment system on the Pilot, which makes its way onto the Passport. The graphics are very crisp, making it really easy on the eyes especially in the navigation menu. The display from the rear camera is also very crisp, helping you avoid even the smallest thing behind you, which might be missed on lower resolution displays/cameras.

Although the Passport is 6 inches shorter than the Pilot, the interior space remains the same for all occupants, the loss of 6 inches happens behind the rear seats. Like the Pilot, there’s lots of leg and head room in the Passport, you just don’t get the third row of seats. The second-row seat is big enough for three passengers, although the middle passenger might not be too happy on longer trips. The floor is flat, so at least the middle passenger has a place to put their feet comfortably on the ground. The rear seats can also slide forward/backwards.

The interior layout is easy to understand and is very simple to use. The interior is also very quiet, making this a great vehicle for road trips, in addition to being a daily driver.

Like the bigger Pilot, the 2019 Passport can be loaded up with a lot of tech, convenience, and safety features, the higher the trim the more gadgetry you can expect from your Passport, although the lower trims are fairly nicely equipped. Below is a list of what you can expect to add to your Passport:

I think the 2019 Honda Passport is a very nice-looking vehicle, it is Honda’s version of a vehicle that you actually take off the paved road. Based on looks alone, it has what it takes to go light off-roading, in real world conditions, I have no idea how well it performs, as I didn’t take it off road. Realistically though, these vehicles will be found at malls, school parking lots, and soccer practices.

The Passport is a comfortable crossover, it has plenty of space for a small family, and is not too bad on fuel consumption, with the added bonus of the ability to go to the cabin deep in the woods, in the summer or even winter.