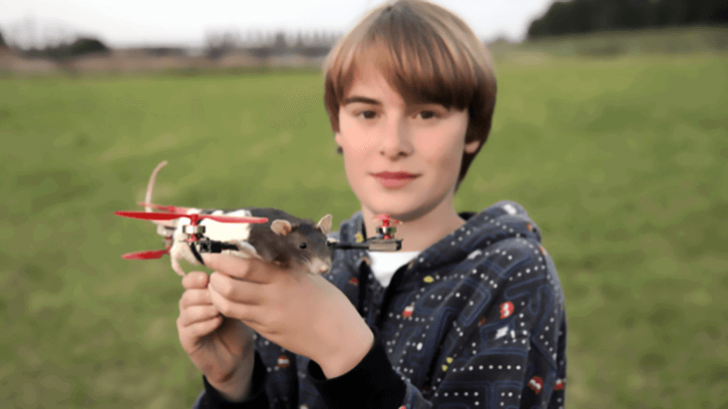 Have You Ever Seen a Flying Rat? They Exist, and They’re Terrifying

A few years ago Gina wrote about Orvillecopter, a cat named Orville turned into a flying device. Created by Dutch artist Bart Jansen, this delightfully creepy creation terrorized both the skies and the Internet.

We were big fans here at Unfinished Man, and we’re pleased to see that Bart has done it again with the creation of Ratcopter. Here’s the story…

The deceased rat is named Ratjetoe, which means ratatouille in Dutch. It had cancer and had to be put down, and it’s owner – 13-year-old Pepijn Bruins – was very sad. He was so sad that in fact that he asked to make a few changes to Ratjetoe. “When I learned he had cancer and the vet had to put him to sleep I was very upset. I had seen Bart and Arjen and their flying cat, and I asked my dad if it would be possible to have the rat fly.”

Well, that’s certainly one way to honor the dead. Here, have a look for yourself.

You know, I used to have a pet rat as well. My uncle got it for me one Christmas from a pet store (people fed them to snakes,) and though I wouldn’t say I loved it exactly, it was certainly an interesting creature. Sometimes I would let it out to scurry around the bed, and it would shit. That’s really about the extend of it.

Eventually it ate a bunch of newspaper and started bleeding from its eyes, so I took it to the local forest and released it to be free and be with its own kind. I suspect it was happier up in heaven when it undoubtedly died 5 minutes after I released it into the woods.

Anyway, I didn’t turn my rat into a helicopter and that’s kind of a shame. At the very least I could have terrorized my parents, and that… would have been well worth the effort. So if your pet dies, you should definitely turn it into a flying machine or taxidermy statue.