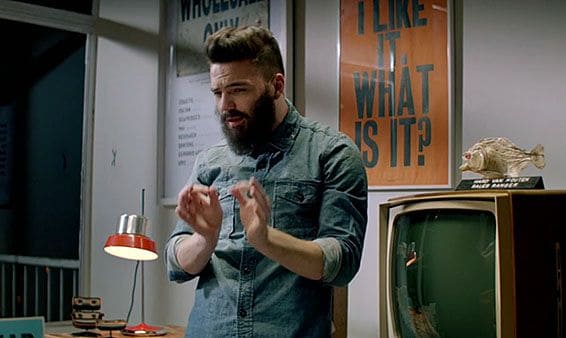 A few years ago I spent a few days in Amsterdam and discovered an interesting denim brand called… Denham.

I thought the name was a stupid play on the word denim (turns out it wasn’t, it’s the last name of the person who started the company – Jason Denham), but decided to buy a pair of their jeans anyway because they looked neat, and I was probably just drunk enough that the exorbitant price tag didn’t bother me.

Fast forward to today, and the jeans are long gone. Even the brand name had faded from memory, right until Gina sent me a link to Denham Psycho, the video you’re about the watch and probably love. The official description goes like this…

Conceived and produced by the award-winning creative agency Flickering Wall, ‘Denham Psycho’ is a short film tribute to the controversial cult-classic originally premiered at Sundance in 2000.

Basically, if you’re a fan of snobby premium denim and also American Psycho, then you’re in for a real treat.

Denham Psycho, The Story of My Life…

I’m somewhat ashamed to say that the card exchange scene was all too familiar for me, and not just because I’ve seen the original movie a million times.

I… I was one of those type of denim snobs.

If it wasn’t made in Japan and dyed 12 times using natural indigo by a 1000 year old resurrected geisha, well… I just wasn’t buying it. Like I said, I was a bit of a denim snob. These days I only ask that it was dyed 6 times, and by a regular person even.

If you’re interested in checking out Denham’s wares, then you can do so at their official website. Just note that I haven’t worn their stuff in many, many years, and have no idea what it’s like these days. If you spend hundreds of dollars and their stuff is junk, save your tears for someone that cares.