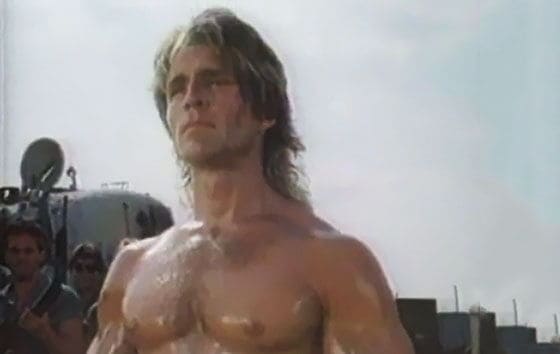 Deadly Prey Trailer – They Turned The Killer Loose… On Themselves

I’m a huge fan of terrible 80s action movies. I don’t really discriminate, but my favorites are the movies that have a ton of awful dialogue and most importantly, people yelling incoherently as they flail around and attempt to impale each other with swords, metal pipes, or in the case of Deadly Prey, “wooden” javelins. The 80s seemed like a more innocent time, when directors either didn’t realize that their films were terrible, or didn’t care.

Deadly Prey features a lone wolf ex-military man on the run from his former employers. Hunted, with his back to the wall, he has no choice but to scream nonsense while running shirtless from place to place fighting off evil men in aviator glasses. It actually makes sense that everyone is wearing sunglasses. It helps them block out the shining aura from our hero’s amazing flowing long hair and denim booty shorts. What man wouldn’t be stunned by this? Perhaps the military needs to start requiring their soldiers to have long blonde hair and wear booty shorts all the time. The booty shorts would be Kevlar, of course.

The movie looks amazing in the same way that Undefeatable does, and that’s to say amazing in a why the hell am I even watching this? kind of way. If you’re drunk beyond reason, I highly recommend these two films. If you’re not, well… watch them anyway, and then you’ll understand why I suggested you drink first.