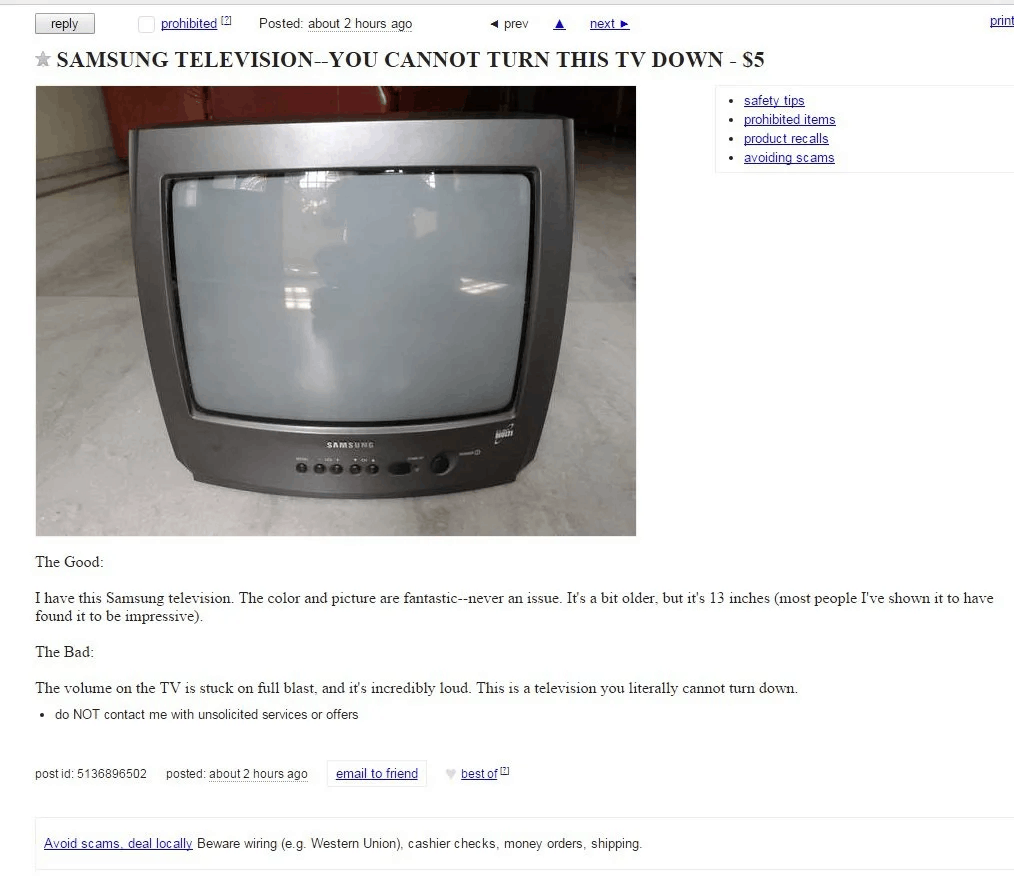 Have you ever attempted to take a picture of a television or any object in general that has a reflective surface? If so then you know how difficult it can be to avoid revealing an unwanted glimpse of yourself lingering within the background of your photo. At least taking a picture of a television is easier than attempting to take one of a mirror. I don’t even know how somebody would go about approaching such a task per say. Whoever succeeded in taking such a photo definitely did not succeed on their first try. Moving forward, the reason why I got so wrapped up in the subject of taking photos of televisions is because I recently came across a few hilarious craigslist tv ads. However, I consider them to be more in the category of failed ads rather than legitimate ones and once I show some examples, trust me you will understand why.

First up we have a seemingly average craigslist TV ad.

However, if you take a closer look at the photo, you might regret ever looking at it in general. Hopefully the person who posted this advertisement realized that their reflection was in the photo and took it down. I wouldn’t be surprised if they did notice it and leave it up though. On the bright side, at least the TV allegedly worked pretty well except for the volume which is apparently “stuck on full blast”.

The next example coming up is similar to the previous one shown but there’s an obvious difference between the two which you will see in a few moments.

As you can see, although both craigslist tv ads had the seller’s reflection in their photo, this particular ad provides a closer view of everything…Hopefully the man taking the photo had at least one item of clothing on. On the bright side, the TV and TV Stand he was selling seemed to be in good shape.

The final example I am going to be showing you is one that I just had to include.

I am not sure where to even begin with this craigslist tv ad. I have countless questions. Was this ad meant as a joke? Did the seller purposely leave the reflection in the ad’s photo or was it unintentional? How was the photo even capable of showing that reflection? The list goes on.

Overall, these were some the funniest craigslist tv ads I’ve seen so far. Maybe I’ll come across some new ones in the following weeks.