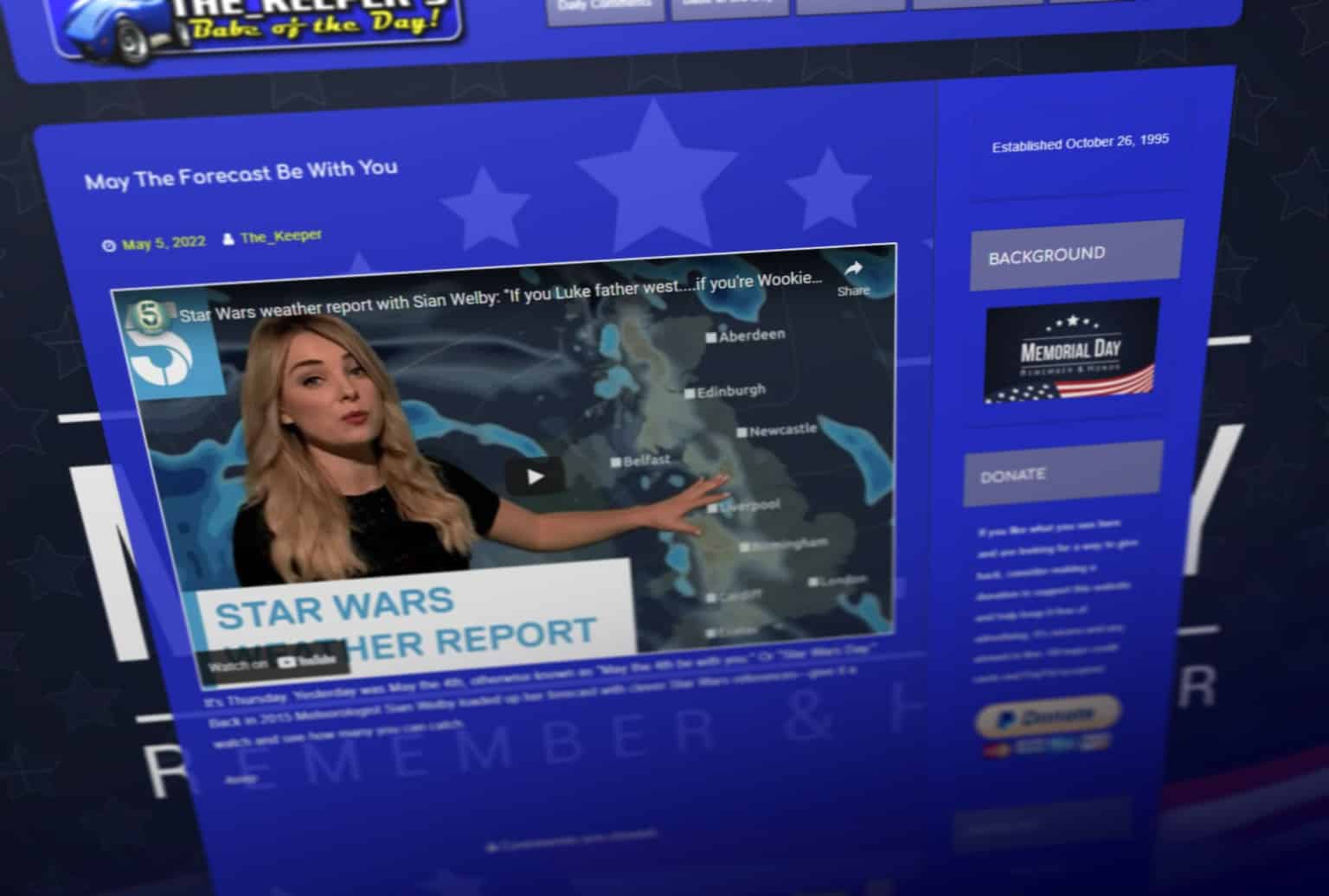 The_Keeper is the man behind one of the most popular babe galleries on the internet. His site, The_Keeper’s Babe of the Day, features a new beautiful woman every day. But the site is so much more than just babe photos. It’s a little difficult to describe, as he’s written about everything from movie trailers to running a BBS (Bulletin Board System) across the site’s long history.

In short, he seemed like an interesting fellow, so I sent him an email and asked him if he would be so kind as to answer some of my questions about himself and his work. He graciously agreed, and here is our conversation:

A conversation with the man behind Babe of the Day…

Unfinished Man: So, you run this site called Babe of the Day that’s been around since 1995. What inspired you to create it, and what’s kept you going all these years?

Keeper: The inspiration to create my website came out of curiosity. The Internet was just becoming accessible to the average person in the early to mid 90s. I had played around with connecting to the internet via CompuServe, AOL, and with a product called Internet In A Box. However, I didn’t create my first website until a small Internet Service Provider (ISP) called CNS Net began offering dialup Internet access in my area. As part of their services, they gave each of their customers web space for personal homepages. I created one and my main goal at the time was to get as many people as possible to see it. This was the beginning of my website and unfortunately the beginning of my volatile relationship with CNS Net’s owner. For him it became a race to accommodate the increasing traffic to my website while also having to support his other customers. I don’t remember how long it remained on his server before migrating it to another more robust ISP called UTI.

I read your story about The Dark Castle. For those of you reading this, click here to read the full story, because it’s super interesting. But for Keeper, well… do you ever miss it?

At first when I shut The Dark Castle Bulletin Board System down I did miss it. It was a daily part of my life for 11 years and when it was gone, there was definitely an emptiness. Thankfully earlier that year I had started a full-time job as a programmer and that greatly helped fill that void.

How did you create such a successful community around your BBS?

I originally created The Dark Castle BBS because there was only one local BBS in my area and it was very strict and basic. I wanted something loose, fun and creative. I knew people would appreciate something outside of the ordinary, it just had to be built.

What were some of the biggest challenges you faced in running The Dark Castle?

The biggest challenge in running the BBS for me was keeping it fresh. I found that creating new features that kept my users interested was the best way to keep them engaged and coming back for more.

Do you have any favorite memories from running The Dark Castle?

I’d have to say that my best memories came from creating new features and options with several friends who helped with the early programming. Once something new was implemented it was then gratifying to see the users enjoying and reacting to what we had done.

How did you feel when the FBI came to visit?

A: That was not a good day. Cybercrime was in its infancy at the time and very few in law enforcement understood it. After being questioned by the FBI agent, I realized that they weren’t necessarily looking for me. They were after stolen credit cards which were being traded electronically by a friend who was running an extension of my BBS in northern Illinois called The Dark Castle II. I didn’t give the FBI agent any information, but it wasn’t long before they descended upon The Dark Castle II. One day everything went silent. Both Jesse and The Dark Castle II were suddenly gone. To this day I still don’t know what happened to my friend Jesse and his BBS. I heard rumors of his arrest and that all his computing equipment was confiscated but had no way of confirming it. I also knew better than to start poking around and asking questions.

What was your relationship with Jesse James and the users of The Dark Castle II?

A: Jesse started out as a regular user on The Dark Castle. He would call in frequently and really seemed to enjoy the system. We would talk occasionally and before long we were trading software. One day he told me that he wanted to set up a BBS of his own and asked if he could call it The Dark Castle II. I thought it over and said yes. I gave him the BBS software and aside from a small amount of work from me, he got it up and running. I checked in occasionally just to see how it was going and was satisfied with his changes. It grew fairly quickly into a popular BBS and some of his users would turn up on my BBS too.

How did you get involved in the Jake Cutter movies?

We made the first movie mostly as a promotional tool for the BBS, but also because we just wanted to see if we could do it. There was software called Take-1 that allowed you to animate a movie frame by frame on your home computer. It was getting popular and people started creating movies of their own. They would then upload their movie to BBS’s around the world where others could download it and watch.

What was your inspiration for Jake Cutter – Beyond Rescue Raiders?

Rescue Raiders was a game that was popular on the Apple ][ around 1984. In the game you commanded a helicopter and various military vehicles to defeat the enemy and blow up his base. We chose to base our movie on a fictional hero in the Rescue Raiders environment. The story was written by a friend, the animation by another friend, and I did the graphics. Since it was based on the game, I got away with using or modifying much of the existing graphics. When the movie was completed it was uploaded to several BBS’s. From there it spread to hundreds, possibly thousands of BBS’s. It was a huge success and it made The Dark Castle known across the USA. Once we saw how successful it had become, we wasted no time getting to work on the sequel, Jake Cutter II.

What’s the future look like for Babe of the Day?

A: Good question. Like The Dark Castle BBS, when I started it I had no idea that I’d still be doing it so many years later. It blows me away when I get email from visitors who were around when I started it roughly 26 years ago and continue to visit daily! It’s a hobby that still interests me, so I hope to continue posting new content daily with, of course, the best damn babes on the net!

No Ragrets: Why Men Should Think Twice Before Getting a Tattoo

4 comments on “Babe of the Day: Meet The_Keeper – The Man Behind the Internet’s Most Popular Babe Gallery”