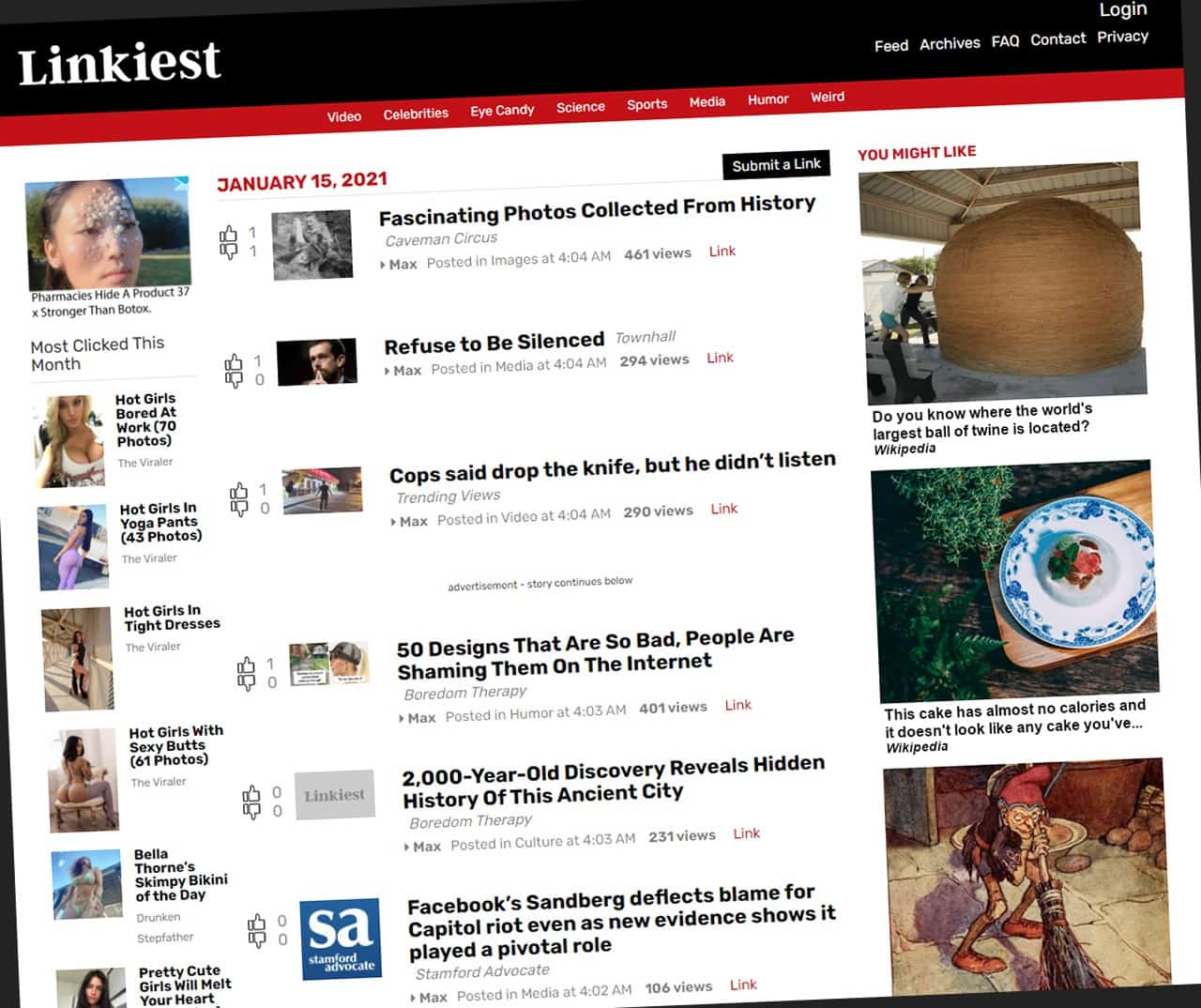 Founded on June 1st, 2005, Linkiest is an inherently right wing website aimed at a male audience, founded by John Hawkins. On September 30th 2005, Linkiest shut down “because it was a one man show and got to be a little too much work”, and was later reintroduced on December 4th, 2006 with a larger writing staff.

Linkiest boasts star topics on their website including videos, celebrities, eye candy, science, sports, media and so many more. Alongside articles from their own authors, Linkiest follows its name and presents a variety of links to other popular websites, making it a great encyclopedia for right wing content across the Internet. It also bears a resemblance to Caveman Circus in terms of content.

The owner, John Hawkins claims he is “one of the best writers walking the planet” according to his Facebook page, and perhaps it’s not too far-fetched. It is quite hard to successfully convey any positives for Trump but his 22,000+ Twitter followers seem to agree – despite not many of these tweets aging well after recent impeachment events. Other pieces from their site such as ‘Refuse to Be Silenced’ by writer Kurt Schlichter do a good job of attempting to convince readers that supporting Trump may be the right choice.

It is also rather concerning that the linked Twitter account, Right Wing News has been suspended, as it has violated the Twitter rules, which begs the question what kind of content has led to this outcome. But censorship is another topic in itself.

What are the most clicked articles?

The left panel of Linkiest is dedicated to the Most Clicked This Month section which – as expected for a men’s website – is full of articles of ‘hot girls’, mostly from The Viraler. However I’m not entirely sure how popular this section really is as there are only a max of one singular thumbs up vote on each article, and most have none.

If you head over to the Eye Candy section on the other hand, there is far more of a variety of female content from other websites such as Drunken Stepfather, G Celeb, and Egotastic Sports. Eye Candy focuses on specific models to attract more attention rather than collections of hot girls, which leads me to believe that the Most Clicked This Month sidebar is most likely purchased and not actually sorted by popularity. Also, if you refresh the page, the count towards the likes and dislikes on a post disappear, and seemingly do not count towards anything.

The media section is the heart of Linkiest’s site, with right wing themes running throughout, though they are hidden behind a wall of attractive women. While those are great to browse through, Linkiest has a strong interior of right wing muscle behind it.

Think not? Well, let me present an article titled: “Absolute Legend: Trump Walks Away From Republican Party Without Even Looking Back At Explosion”. This hyperbolic work of fiction definitely catches the eye with its 13,000 shares on Facebook and 1,800 shares on Twitter – and is a key example of the right wing propaganda coming from a far right wing website.

If you hate Liberals, this may just be the site for you. And if not, Linkiest is still a great source of other news and has a great collection of ‘hot girls’ to see.