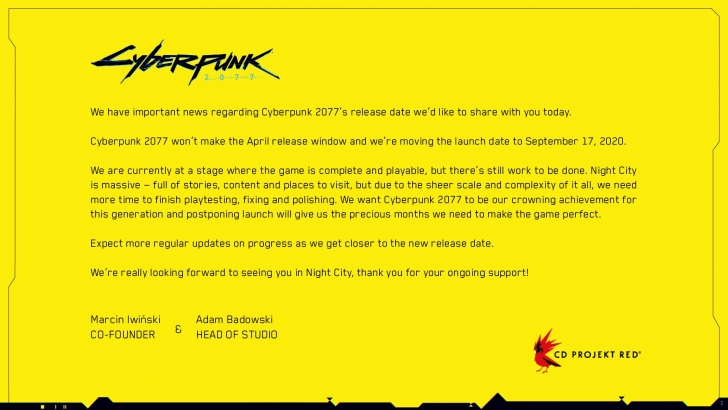 If you’re one of the millions of gamers anxiously awaiting the release of Cyberpunk 2077, you probably saw the announcement that CD Projekt Red has decided to delay the release of the game until September 17th, 2020.

If you’re like me, you went through the usual stages of grief, from denial all the way through to acceptance.

But why was the game actually delayed anyway?

Well… it depends on who you ask.

CDPR insists that everything is going well, and that they just needed another 5 months to polish everything up. But according to rumors from a supposed Polish leaker, there’s more to the story.

Whatever the reason, I would like to declare something that I believe is a truism of all video game developers, and programmers in general: they rarely have any accurate concept of how long something will take to create, especially if it’s something they haven’t done before.

It’s the unknown unknowns that really bite them, and game development seems full of them.

So the next time your favorite game is delayed, try not to take it too harshly. It’s not that they’re incompetent, it’s that games are incredibly complex, and humans are absolutely terrible at estimating the work involved to conquer this complexity. Maybe one day our augmented cyber brains will do a better job giving accurate release dates.

Originally published on January 24, 2020 in Gaming