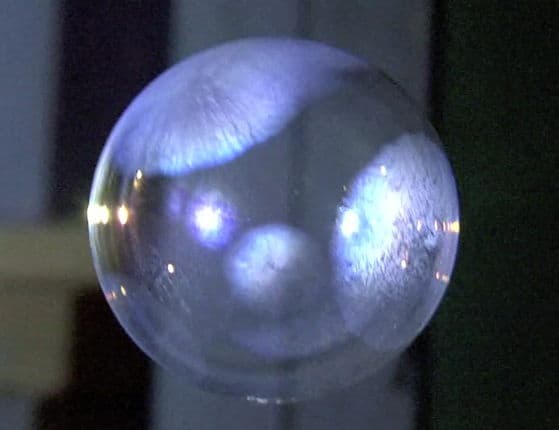 Below is a pretty trippy video of bubbles freezing mid-air, you know the bubbles that we used to blow and try to pop when we were kids, some of us still do it as grown-ups.  You can actually see the ice forming as they slowly freeze; it looks like a scene from X-Men, looks pretty cool, literally.

The experiment took place in Mount Washington, NH where temperatures were – 33 F.

After some trial and error, a solution of dish soap, sugar, and water was found to create bubbles that would freeze before hitting the ground. With air temperatures outside around 33 below zero, and winds at nearly hurricane force, the “experiment” was attempted in several different sheltered locations at the Sherman Adams State Park Building where temperatures were a few degrees warmer. One of the locations was warm enough that one could actually see the bubbles crystallizing, while the second location was several degrees colder, and the bubbles froze almost immediately.