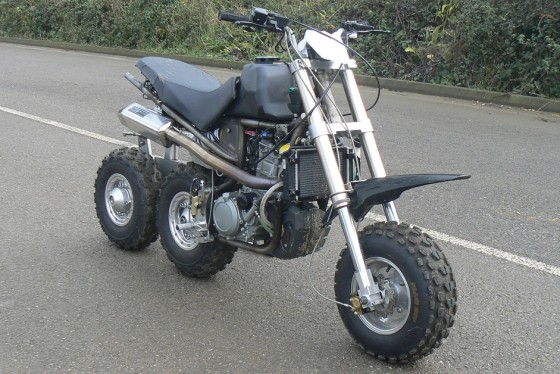 I’ve never had an opportunity to ride a motorcycle on my own but I certainly appreciate the technology in the latest bikes as well as the beautiful designs. Just when you think a sports bike can’t look any sexier, manufacturers somehow are able to pull it off. The bike featured today is not exactly sexy but the concept is definitely unique and has a number of advantages going for it that could be introduced on a larger scale to the motorcycle industry.

The three-wheel in-line motorcycle is currently aimed at the off-road riding market and the idea came to Jon after witnessing a motocross race where the bikes struggled to get grip in order to defeat the largest sand dunes. A few designs were considered but the end result was having three wheels which would feature independent suspension, two-wheel drive, and the rear wheel would need to be steered. The rear wheel steering can also potentially help you avoid a slippery situation where the front wheel hits a slippery patch in wet conditions and slips, the rear wheel steering would reduce the sudden lack of control until the front wheel has cleared the slippery/wet road patch. Or at least that’s the idea.

The three-wheel in-line motorcycle has a 3x2x2 layout with the middle and rear wheel being driven and providing excellent grip. The two-wheel drive will also provide better acceleration over gravel and slippery conditions whether it’s the rain, mud, or slippery hill sides. The rear wheel steering also helps with pushing the bike around a corner and the three-wheel in-line setup reduces pitching momentum over rough terrain providing a much smoother ride. 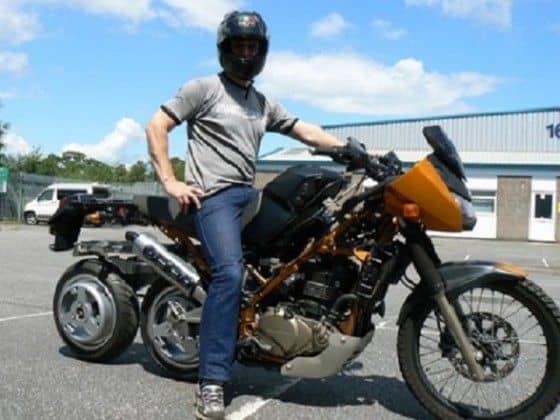 With three tires, there is more surface area and this also helps in preventing the motorcycle from sinking in marshy conditions or soft ground. Stopping is also more controllable because the motorcycle features three-wheel braking which is especially useful down extremely steep hills. And unlike a quad or trike, the three-wheel in-line motorcycle can be leaned in the corners just like a two-wheel motorcycle.

So far, no major motorcycle manufacturers have approached Jon regarding this concept as the potential market for this type of motorcycle is unknown. This is probably a good concept for off-road bikes and adventure bikes where the 3x2x2 layout would prove to have advantages. I think it would be pretty cool to see a collaboration between Jon and big company to see what type of a beast they could create. Even better if it was applied to a sports bike! Have a look at Dynamics Design Studio for more videos of the three-wheel in-line motorcycle.