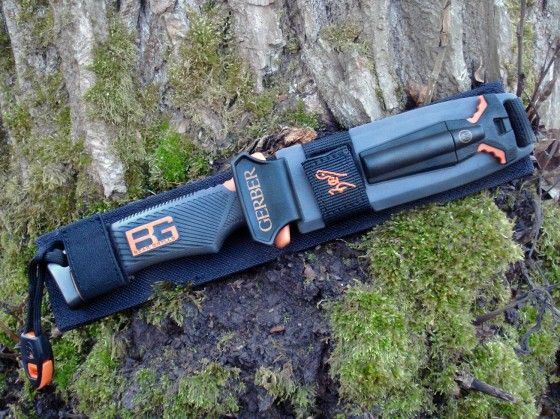 Ever since I was a child, I’ve been interested in knives and anything even vaguely hunting or military related.

I don’t know why exactly; I’ve never needed to hunt for my food (I have a supermarket for that), and outside of computer games, I’ve never had to defend myself using a knife. So why bother owning a survival knife? Well, if nothing else, I think there’s something manly and primal about owning a blade; especially one called The Ultimate Knife. If we face an apocalypse, at least I can take comfort in owning a knife that not only has a sharp edge, but also an obnoxiously loud whistle to annoy my attackers into submission.

The Ultimate Knife, made as a collaborative piece between Gerber and Bear Grylls, is a no frills survival knife that sports a sharp high carbon stainless steel blade, Ferrocerium rod fire starter, and (as previously mentioned) an obnoxiously loud “emergency whistle”, which I’ve personally tested out during a game of beer pong to great effect.

This is usually where I list off a few token gripes, but in this case, I really don’t have any. I could say that the hand-signal diagram on the back of the sheath is silly, but in reality, it could actually be very useful in an emergency. Do you know proper hand signals and procedures for attracting a rescue team? I certainly didn’t, and this is the kind of information that would be invaluable if I ever find myself stranded nude in the woods, covered in blood, with a dead deer at my side.

Overall I would say that The Ultimate Knife is an excellent addition to any man’s knife collection. The question you need to ask yourself is “does my knife have a whistle that is loud enough to deafen a man wearing ear protection?”. If you answered no to this question, then your knife isn’t much of a knife at all.