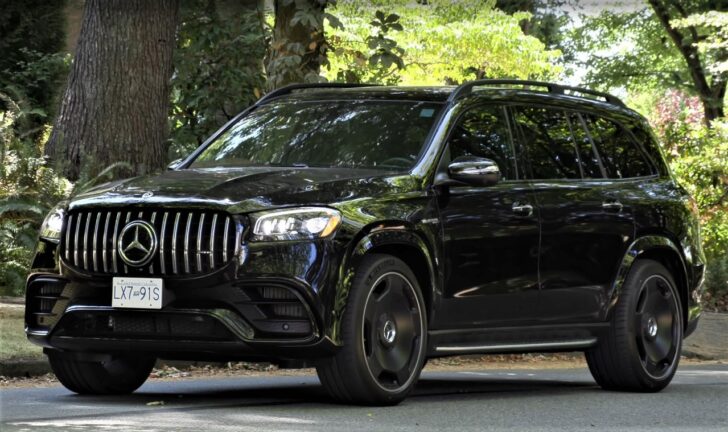 The Mercedes-Benz S-Class is a car that many people aspire to get when they’re successful. It is a car for upper management and executives, and those with money. The S-Class has always been at the forefront of innovation and many of the tech, safety, and convenience features first introduced on the S-Class sedan have made their way into more affordable cars.

However, this post is not about the S-Class sedan, but the GLS SUV, which is the S-Class of SUVs. We live in an SUV-filled world, so Mercedes has been producing an SUV version of their flagship sedan, however, the GLS is based on the E-Class rather than the S-Class. The original GLS was called the GL-Class, and was introduced in 2006, before MB switched over to calling all their SUVs GL with a third letter denoting their position in the lineup. GLS is the equivalent of the S-Class, GLE is the equivalent of the E-Class sedan and so on.

A couple of weeks ago we had the opportunity to review a 2021 Mercedes-AMG GLS 63, below are my thoughts on this full-size SUV.

The Mercedes-AMG GLS 63 is powered by a handcrafted 4.0-liter biturbo V8 engine with EQ Boost, the same engine found on the GLE 63 S we recently reviewed. This gem of an engine produces 603 horsepower at 5,750 rpm and 627 pound-feet of torque between 2,500 – 5,000 rpm. Power is sent to all-four wheels via a 9-speed AMG SPEEDSHIFT TCT transmission. Mercedes-Benz claims a 0 – 100 kilometer/hour time of 4.2 seconds. These are incredible numbers for an SUV that can seat 6 or 7 people comfortably and can even go off-roading.

You’d think having 600+ horsepower in a vehicle would be intimidating, however, getting behind the wheel of the GLS 63 doesn’t feel that much different than any non-AMG vehicles. The GLS is a pretty tame vehicle and is really easy to drive in the city, despite its size and power. However, if you do want to bring out the “sporty” side of this car, put in the Sport or Sport+ mode and the engine is ready to play. The suspension firms up, the steering feel is heavier, throttle response sharper, and the exhaust makes a beautiful note and even produces popping and crackling sounds at high rpm gear changes, which is a sound normally associated with super cars. It is pretty addicting and it feels unnatural on a family hauler of this size.

Even driving in comfort mode, the GLS 63 is responsive in city traffic and on the highway, the V8 engine produces enough power that you don’t really need to go into the more aggressive Sport modes, but they’re there if you feel like going to track, maybe? The engine is smooth, as you’d expect from a Mercedes-Benz flagship SUV. The transmission changes gears smoothly and the ride quality is excellent. This a perfect combination for soaking up miles and miles of highways.

The EQ Boost system adds in a 48-volt lithium-ion battery that adds 21 horsepower and 184 pound-feet of torque under heavy acceleration. The added benefit of this system is the Eco start/stop, which is the smoothest system on the market. Even the smoothest start/stop systems currently available still send some vibrations into the cabin when the engine starts at a stoplight, the MB system is completely seamless, no vibrations make it into the cabin and the engine barely makes a sound when it comes back online.

The 2021 Mercedes-AMG GLS 63 is quite a handsome looking vehicle, it shares its looks with a majority of the SUVs in the MB lineup. It is a conservative looking vehicle with styling that won’t be offensive to anyone. Our review GLS was equipped with the optional 23” AMG monoblock wheels, which looked stunning in my opinion. They reminded me of wheels you’d find in 70’s/80’s luxury cars.

The GLS 63 is a large SUV and it has a lot of road presence. Mercedes calls it the S class of SUVs, which it is, but I didn’t get the head turns I would expect with the S-Class sedan. I’m not sure why that is, the S-Class sedan always turns head, while the GLS had barely anyone checking it out, even with the giant 23” wheels.

The interior on the Mercedes-AMG GLS 63 is identical to the one on the GLE 63S we reviewed a few weeks ago and it shares the overall look with the rest of the MB family of vehicles. The new batch of Mercedes-Benz vehicles coming in the next few years have redesigned interiors, currently available on the new S-Class and C-Class, which should make their way into the GLS and other vehicles in the MB lineup over the next year or two as those models get updated.

The interiors on current MB vehicles are quite eye-catching and they have high quality materials. The interiors look modern and have an elegance about them. The interior on the GLS features the signature horizontally laid out dual-screens that start at the gauge cluster and ends where you’d normally find an infotainment screen. These screens are quite customizable, ranging from elegant to sporty and everything in between. The screen that replaces the gauge cluster is controlled via the small trackpads on the steering wheel, the main infotainment screen can be controlled via the other small trackpad on the steering wheel, the trackpad on the center console, or by touching it like a standard touchscreen.

All these controls may seem overwhelming at first, but after using it for a few days, they become intuitive to use. The MBUX also comes with voice command, which is quite a good system and can understand a lot of different commands.

The interior is extremely comfortable and quiet, as you’d expect from a large Mercedes-Benz vehicle. The front seats are supportive and can be adjusted to fit just about any sized occupants. The seats are heated and cooled and come with MB’s excellent massage function, offering a variety of massages from “Classic” to “Activating”. The rear seats are also comfortable and there’s a lot of leg and head room. Even the third-row seats are quite comfortable and they are easy to get in an out.

If you’re looking for a large luxury SUV that can move the family/friends around in comfort, can tow up to 3,500 kg, and beat the 0 – 100 km/h time of many sports cars, then the Mercedes-AMG GLS 63 4MATIC+ is the vehicle for you. The GLS is a perfect executive SUV for those that want an S-Class but like the higher seating position or the ability to go off the beaten path.

Originally published on August 27, 2021 in Cars