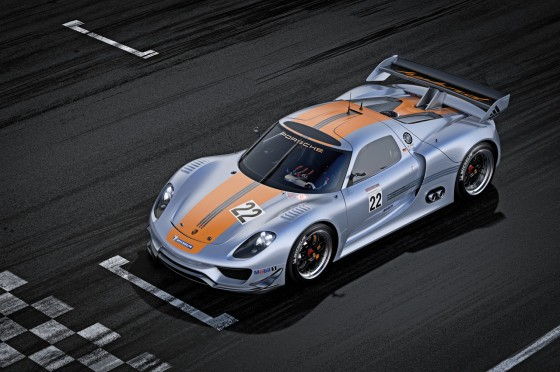 It seems like ages ago when I wrote my first article for Unfinished Man on the Porsche 918 Spyder Hybrid concept car; yesterday at the Detroit Auto Show, Porsche unveiled the race version of that car.

Dubbed the Porsche 918 RSR, the car combines the design and technology from the 918 Spyder and Porsche’s 911 GT3 R Hybrid race car.  The end result is a sweet looking race car that has 767 combined horsepower; 562 of these horses are produced by the gasoline powered 6.2 liter V8 engines that revs up to an incredible 10,300 rpm- the sound of this engine should be orgasm inducing.  The gasoline engine powers the rear wheels while the front wheels each get a 75 kilowatt (102 hp) electric engine that is powered by a flywheel accumulator sitting where the passenger seat would be. It stores energy provided by braking, like the KERS system in Formula One.  When fully charged, the driver has access to the additional horsepower at the push of a button for eight seconds, kind of like a nice shot of Nitrous.

Porsche has said they plan to race the 918 RSR race car at the 24 Hours of Nurburgring in 2011.  We expect this technology to also make it to Porsche’s street cars with traditional batteries for storing electricity rather than the passenger seat mounted flywheel accumulator.