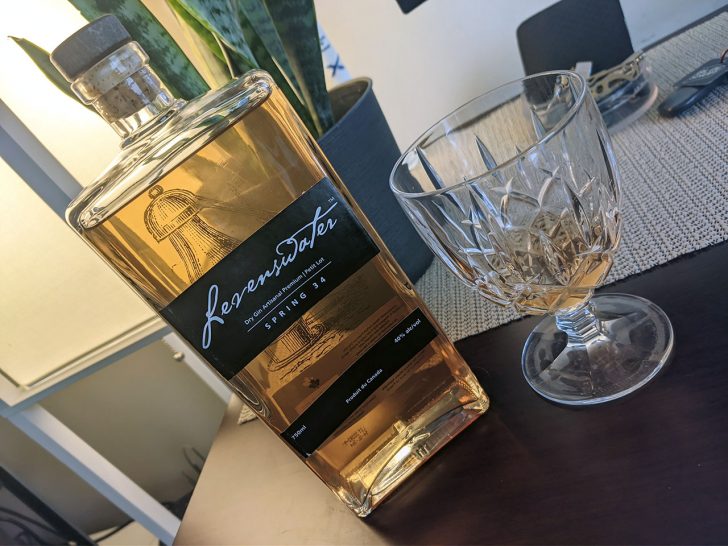 The Minister of Health recently gave a friendly reminder that it’s probably unwise to day-drink all the time, despite what’s going on in the world. That’s sound advice, but I just want to point out that I’ve been doing this for a long time now. In fact, I’m a trained professional. Testing new gins and various other alcoholic beverages is literally part of my job description.

Having said that, I do have one key rule for myself: I never have a drink before 3:00 PM. The only time I break this rule is when I’m stressed, on vacation, or don’t feel like doing any work for the day, but otherwise it’s a rock solid, unbreakable rule that I often follow.

But today I most certainly broke that rule.

Testing Levenswater Gin during the day, for work, of course

Gin, categorically, is a personal favorite of mine. Whoever said that it’s only for psychopaths’ has no idea what they’re talking about, and if I hear them say that again I’ll… send them a strongly worded letter.

I actually like it even more than vodka for general sipping and cocktail making, and I’m always excited to try something new.

So along comes Levenswater Gin, and I’m in love.

I have many qualities, but a sophisticated pallet surely isn’t one of them. Yet I can appreciate the finer stuff, and I’m quite comfortable in saying that Levenswater Gin is one of the best gins I’ve ever tasted.

Levenswater Gin is described as being created from “a complex mix of exotic and natural botanicals”, and while I’m sure that’s true, the flavor that comes to mind for me is caramel.

Not the sugary sweet blast you would expect from biting into a wad of caramel, but a very subtle note of it, lurking just below the surface.

I love it, and if that sounds like your thing, then I suspect you’re going to love this every bit as much as I do. It’s a unique note for a flavored gin, and let me tell you, I’ve tried hundreds.

What’s with the bottle?

The bottle is awesome, that’s what’s up. I’ve shown a dozen of my friends photos of the bottle, and the first thing each of them said is that it looks fantastic. I happen to agree.

If I’m ever allowed to leave the house, perhaps I’ll let my friends try some of this gin instead of wistfully looking at photos of it over the Internet.

Where can you buy Levenswater Gin?

Ready to take the plunge and responsibly drink a bottle of the Levenswater Spring 34 gin? Head over to the official Levenswater website and place an order.

Why haven’t you talked about their heritage?

So instead I suggest you head over to their about page and see what they’re all about, and I’ll stick to what I know best: enjoying their beverages and writing about them from the point of view of an unsophisticated pleb.