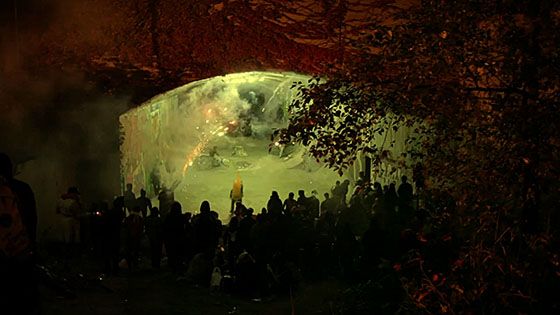 Perhaps you’ve noticed, but I don’t usually write about skateboarding, or post up skateboarding videos. As with most activities filmed by amateurs (excluding *ahem*, a certain type of home video), many of them are really awful beyond words. Every so often you see a great one, though, and this video by the Zenga Bros definitely fits the bill.

The footage was captured at the 2011 Leeside Halloween Jam in Vancouver, BC, which is – surprisingly – an event and place I’ve never heard of before. Considering I’m from Vancouver, I usually would have heard about such things. This means “they” were hiding it from me.

Skateboarding into the Fiery Tunnel of Doom

The video features scene after scene of acrobatic skateboarding insanity while fireworks rocket past the skateboarders.

I actually used to skateboard as a teenager, and I’m happy to say that I quit. It’s now clear to me that skateboarding was one of those things that I should have given up on immediately, and let more talented people do their thing. I was so bad that, well… you probably can’t even imagine. Even with bulky, view obstructing costumes, these guys are light-years better than I was.

Speaking of costumes, is anyone else as amazed as I am that none of the boarders burst into flames? That fellow in the rabbit costume must have balls of steel to wear that as fireballs are hurled towards him. They’re in a concrete tunnel… with fireworks being shot at them… and they’re wearing tons of flammable crappy costumes. Yikes.

If you’re interested in seeing more awesome videos from these guys, then head over to the official Zenga Bros website and take a look around. They’ve posted up quite a few videos, ranging from more skateboarding clips, to bizarre mountain biking videos. Definitely worth checking out.