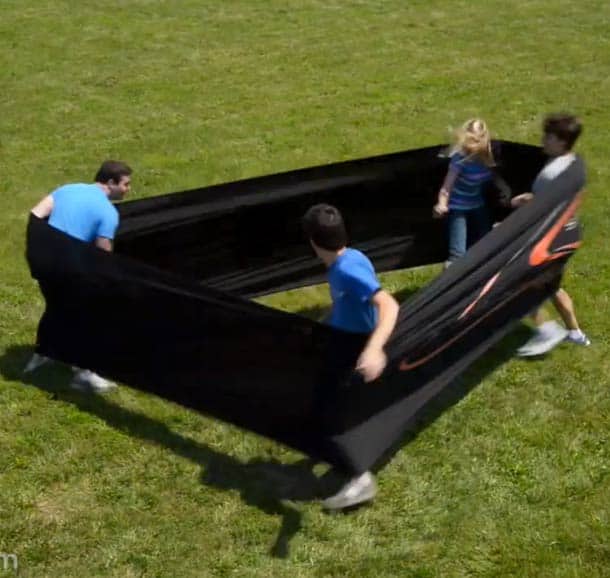 I’ll be honest, when I first saw the Human Slingshot name, the first thought that came to mind was the Human Centipede. After clearing my thoughts, I still can’t get over how much of a terrible idea this contraption is. The Human Slingshot is a simple device made out of a combination of spandex and polyester which allows you and three daredevil friends to fling each other around the inside of a giant stretchable band much like a pinball machine. The material used is apparently quite durable, stretchy, and the seam is a uber-strong felled seam.

How exactly does this “game” work? It’s probably better you watch the video below but basically in a synchronized pattern inside the band (form a square), two players run toward and pass each other into the walls of the giant band. As they reach the wall, the players rotate their bodies 180 degrees and lean their back into the fabric wall which creates the necessary moment to catapult the other players across the confines of the slingshot. You repeat this crisscrossing action until someone finally decides to exit the square, fall, or maybe collide? Did I explain it right? See the video below.

Okay, what are your thoughts now that you’ve seen the demonstration? I don’t mind doing stupid things once in a while but I think I’ll pass on the inevitable concussion, head on collision, and broken nose that is waiting to happen. The promotional video says it’s “incredible simple and incredibly fun” but they forgot the part about it being incredibly stupid. Perhaps I have to try it before bashing it but I’m pretty sure I already know my final thoughts on it.

The website does say that you should always pass each other on the right to avoid collisions but that’s about the only safety advice you’re going to get. For those who are interested, the Human Slingshot will set you back $75 and comes with a carrying case. 1 thought on “The Human Slingshot – Concussion Waiting To Happen?”