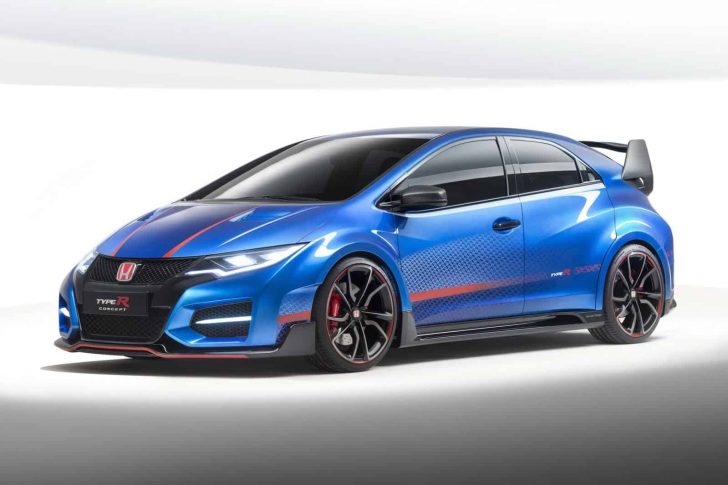 I’ve personally never really been a fan of the Honda Civic thanks to the aftermarket tuning industry and the terrible modifications people have applied to the vehicle in the late 1990’s and most of the 2000’s. Terrible modifications such as the massive spoilers, god awful V-Tec stickers, and those “fart can mufflers” the size of CD’s.

The vehicle in stock form is actually not bad at all and considered to be very reliable but I’ve been left with a bad taste in my mouth. The Unfinished Man team actually reviewed a Honda Civic not long ago and we were quite happy with it. The Civic isn’t known for developing any significant horsepower but the Honda Civic Type R concept that is set to be unveiled at the 2014 Paris Motor Show is a different story.

The Honda Civic Type R concept vehicle seen here is said to be very similar to the production model which is expected to hit the showroom floors in Europe sometime next year. As with most cool cars, North Americans will likely be ignored. This all-new Civic Type R is engineered and developed for European drivers according to Honda.

When it comes to power, the company is pretty tight-lipped about the exact figures but the Type R’s new engine is a 2.0-liter turbocharged VTEC engine which is said to produce more than 276 horsepower and redlines at 7,000 rpm. Honda has stated that the Civic Type R will deliver unmatched performance compared to any previous Type R vehicle and that includes performance variants of the Acura Integra, Accord, and even the Acura/Honda NSX. The Type R’s engine is unrivaled against the said cars when it comes to power, torque, and engine response.

That 280 plus horsepower will be delivered via a short shifting six-speed manual gearbox to make the vehicle a true driver’s car. The vehicle will also feature a ‘+R’ button located on the side of the steering wheel which re-calibrates the engine response, steering, and the new four-point Adaptive Damper System. This button transforms the car into a more dynamic and athletic/agile car for the driver and ideal for race track conditions.

In terms of looks, the example shown definitely reminds me of the tuned civics from several years ago when it comes to the paint and graphics. The actual design of the vehicle is quite attractive and flows smoothly from bumper to bumper. Even the large spoiler, which I normally dislike, works quite well with this design. More details will be available from Honda in the coming weeks.