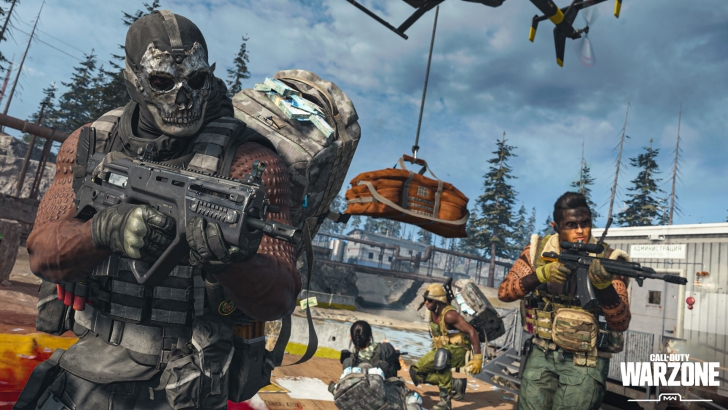 You may have a lot of extra time on your hands right now, and if that’s the case, you’ve got a ton of great video games to play.

If we’re talking about video games, they don’t come much bigger or more popular than the ‘Call of Duty’ series. This is more than just a video game to some people – it’s a way of life. ‘Call of Duty’ is so popular as a franchise that it may soon become a movie. It’s crossed over from video game consoles to mobile phones, with official mobile games using the title. It’s even popular on online slots websites, where an official game has been made based on the fourth ‘Call of Duty’ title. In fact, it’s so popular with online slots players that there’s even a loosely-linked game called ‘Call of Fruity’ which tries to capitalize on the popularity of the name! Whether you’ve played any of the UK Online Slots, mobile games, or video games before or not, you know what ‘Call of Duty’ is, and what it involves.

Some of the people reading this article will never have played a ‘Call of Duty’ game before, and if you’re one of them, we’re talking directly to you. We know what it’s like to turn down an offer to play a group game of ‘COD’ (as it’s known) because you don’t have the game, and you’re embarrassed to admit you’ve never played it. At this point, you probably think it’s too late for you to get involved because the series has advanced so far, and there are too many games. Under normal circumstances, you might even be right, but Activision – the developer of the game and therefore the company responsible for the series – have thrown you a lifeline. A brand new version of the game called ‘Call of Duty: Warzone’ has just been released – and it’s totally free to play. If you’ve always wanted to get involved but never felt like spending money on the product, now’s the time to make the leap!

There are still a few things you’ll need to know before you take the plunge, though – and without any further ceremony, here they are!

‘Warzone’ isn’t even subtle about why it exists, and which game it wants to supplant as the most popular multiplayer experience in the world. It’s a battle royale game, and in that way, it’s very similar to ‘Fortnite’ – the game which millions of people (possibly including you, your children, or both) have been going crazy about for the past two years now. Activision has taken note of the incredible popularity of that game, and ‘Warzone’ is a deliberate attempt to move in on its territory.

As a battle royale game, it follows one basic principle – the last player standing wins, and it’s a war of attrition. Players are split into teams, so it’s not a total free for all, but it won’t be the kind of strategy-heavy combat simulator you may remember from past incarnations of ‘Call of Duty’ This game is all about action.

Vehicles Are A Bad Bet

In the past, coming across a vehicle on a battlefield on any ‘COD’ game was a plus. It meant you could get from one location to another faster than you could on foot, and it might even afford you some protection on the way. That isn’t the case in ‘Warzone.’ We don’t know whether Activision and the programmers intended this to be the case or not, but vehicles have become a near-total liability.

The issue with the trucks, cars, and helicopters that feature in the game is that they all make far too much noise, and they’re way too visible. Also, everyone around you is likely to have a rocket launcher. That’s a bad combination. The sound of an engine starting up will give away your location almost instantly, and you’ll be dead seconds later.

Cash is just as important as the much-fabled killstreaks in this version of ‘Call of Duty’ – and not just because it can buy you weapons and upgrades. Your team has a communal pot of cash, and it’s in your interests to pay into it. If you don’t, you might find your elimination from the field of combat becomes permanent rather than temporary. That’s because it will cost your team cash to bring you back to a redeployment station.

You can add to your team’s pot of money every time you find or receive cash during the game. You’re not expected to give away all of your loot, but putting your fair share in as play goes on makes it more likely that your teammates will be happy to buy you back after you’ve been taken out. What goes around comes around!

So let’s say you’ve died, you can’t be bought back by the rest of your team, and your character has expired on the battlefield. You probably think that’s game over, but it isn’t. You still have one chance of making it back to the land of the living – but you’ll have to fight your way out of a gulag to do it.

Your character will regain consciousness in a prison, and go face to face with another recently-deceased player from the opposing side. Only one of you can return to the battle royale, so give everything you can to make sure it’s you. Don’t expect miracles even if you do escape, though. You might be back on the battlefield, but you’ll have no money and no armor. Life is going to be difficult, and you’ll have to move fast!

More importantly than anything else, have fun with the game. Everyone was new to it at one point, and you’ll soon start picking up tips and tricks as you go. You might even get some helpful advice from fellow players – although you shouldn’t bank on it! ‘COD’ has always been a great way of passing the time, and so this could be the game that gets you through quarantine.

Originally published on April 7, 2020 in Gaming