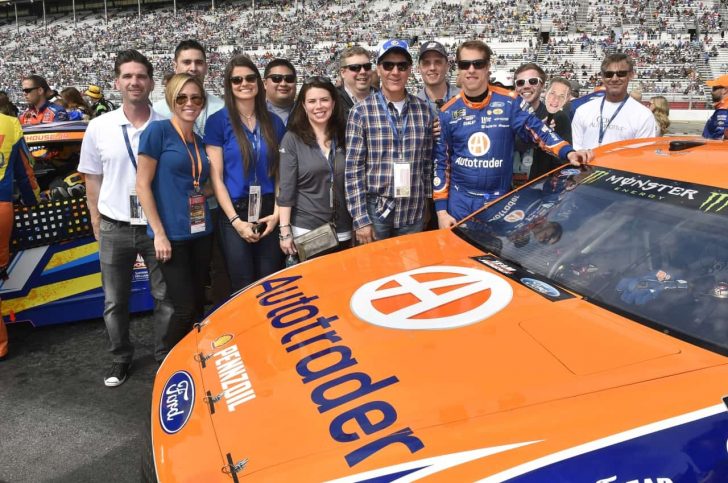 With less than 1/5th of the race left, you’ve been fighting in the top 3 through out the race, a caution flag comes out and you go into the pit to get new tires and fuel. Coming out of the pits, you’re barely ahead of the guy who was in first place going into the pits and now you’ve made it to the top. The race is almost over and it looks like you could be scoring your first victory very early in the season…. then your team comes on the radio and thinks they forgot to tighten the lug nuts on your rear wheel and you have to come back in, handing the lead to the driver that has been dominating the race and you come back out in 14th place. It seems like all hope is lost…

… or is it? Now in many different types of car races, your chances of winning a race from 14th place this late in the race are slim to none, but not in NASCAR. With six laps to go, the same 14th place driver has taken the lead, and won the race!

This was the ending to a very fun filled weekend, which started on Friday with me being flown to Atlanta by Autotrader, to watch the NASCAR race, go into the pits, talk to the engineers, and even meet the driver whose car was sponsored by Autotrader. The trip also included a test drive of a few of the cars from Autotrader’s “Must Test Drive” cars.

I flew into Atlanta airport on Friday evening, and was chauffeured to my hotel in a nice new Cadillac sedan. Upon arrival at the hotel, I received a text message to meet the rest of the group at Philips arena, which is home to the Atlanta Hawks and guess who they were playing? None other than LeBron James and the Cleveland Cavaliers, I was tired but who can say no to watching LeBron play. This also happens to be my first NBA basketball game and the seats were pretty awesome. Watching “King James” play was quite entertaining and of course the Cavs won the game, funnily enough most of the people in the stadium were cheering for the Cavs. It looked like it was going to be a victorious weekend. 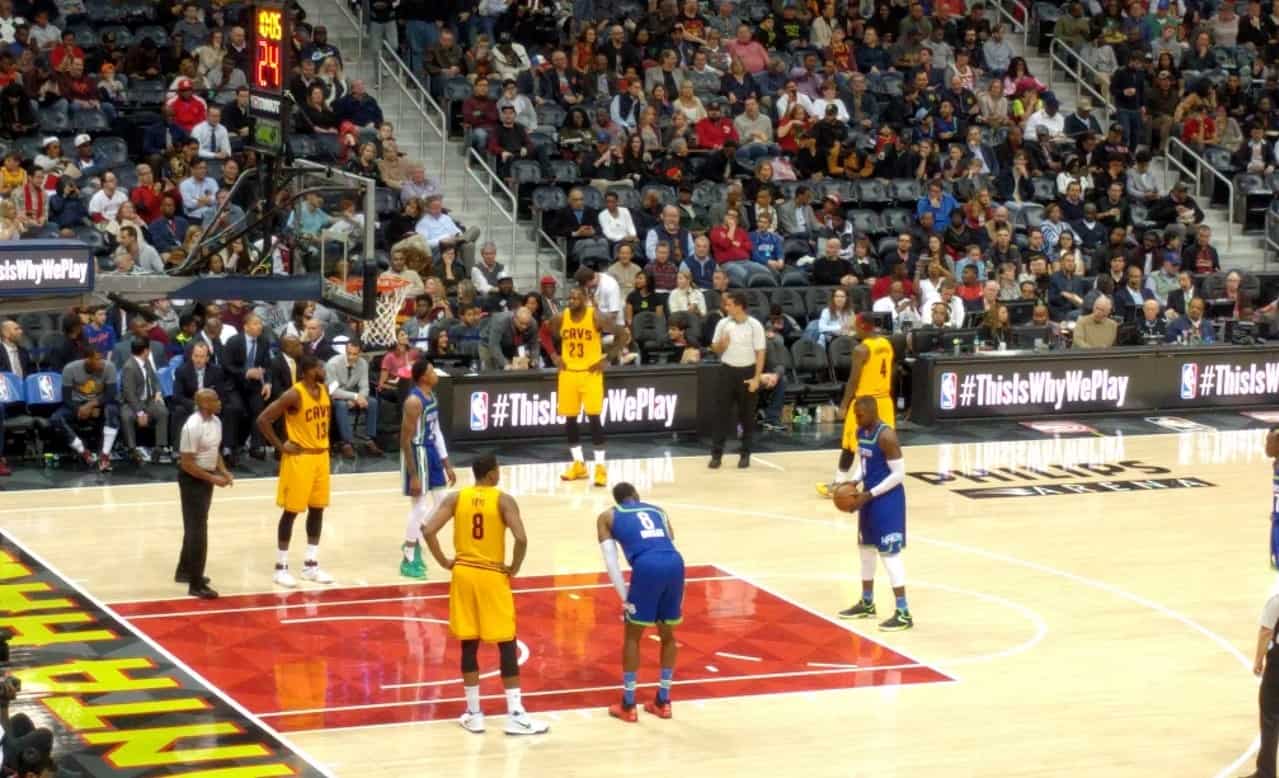 Saturday morning we were briefed on what to expect over the next two days, which was a lot of things. We were briefed on the Autotrader “Must Test Drive” vehicles, the list of those cars hasn’t been released yet, so I can’t say much, but we’ll write a post once the final list has been announced.

We picked up three of the cars from the list and drove to the Atlanta Motor Speedway to get our passes and to meet Brad Keselowski, driver of the Autotrader sponsored #2 Ford Fusion, racing for Team Penske in the Monster Energy NASCAR Cup Series.

Arriving at the track was quite the scene, I’ve never seen such enthusiasm by fans, who camp at the track for days in their huge motor homes. It’s not just a handful of motor homes, there are literally hundreds and hundreds of these in the parking lot, these fans really love their NASCAR racing! The track itself is huge and the parking lot surrounding it is massive, walking around the track is an event in itself, but thankfully there are these little golf cart-type of carts that we were driven around by one of our hosts, I think she’s an excellent cart driver (I don’t care what others said about her ;)).

After arriving at the track, we were allowed to walk around in the pit and garage area, we were literally inches away from the race cars, which is very cool for me, as I’m a big racing fan. It was great seeing all the engineers working on these cars.

We were invited inside the trailer where Brad Keselowski goes after the race/qualifying, it was pretty cool seeing him into the trailer right after qualifying 5th for the race. We spent a few minutes talking to him, he was extremely nice and he acted like a normal person, not some superstar race car driver. Brad has recently married and showed us his wedding band, which is made out of rubber and looks like a tire, pretty cool. I think I might get me one like that too.

Brad talked to us for a pretty good amount of time, he answered questions, some technical and some silly, like what do you do if you have to “go” during the race… he jokingly said “you just go”, which may have been a joke… or maybe not…

One quote that really stuck with me was “the worse thing that can happen in sports is for people to neither cheer or jeer (you). If you’re getting boos or cheers, it means you’re doing something right, as long as you’re not getting booed for something illegal…”

After the racetrack, we switched drivers/cars and drove around Atlanta for the rest of the day, we drove in three of the cars from the “Must Test Drive” list. We ended up at Cox Enterprises (parent company of Autotrader and Kelly Blue Book) headquarters, where we drove another electric car around the parking lot, we weren’t allowed to take that car far unfortunately. That was one of the four cars I was really looking forward to driving more, but hopefully we can do a full review in the near future when it’s more readily available. 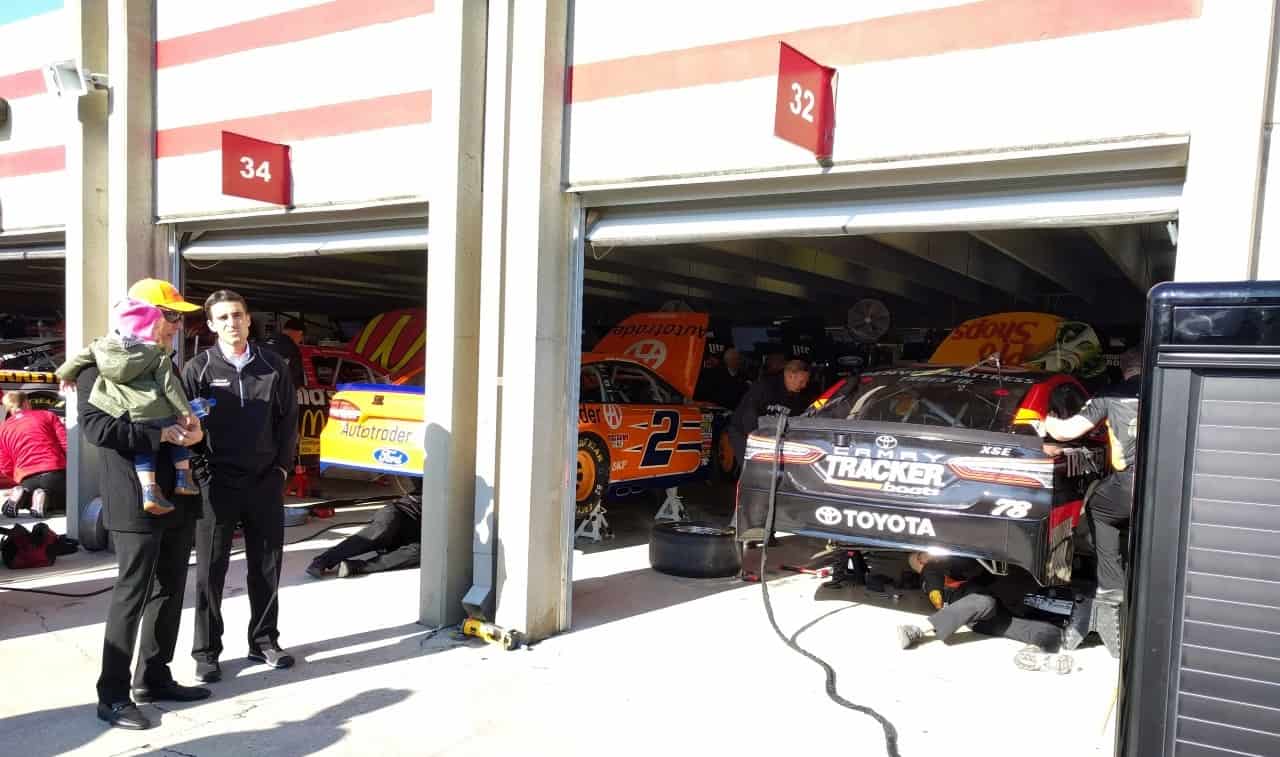 Sunday saw another early morning at the track, where we spent a considerable amount of time in the garages and the pit lane, Sunday is the day when things really heated up and the atmosphere was absolutely electric. Watching the engineers/mechanics running around trying to make final adjustments to the cars before the race, engines roaring, and fans walking around everywhere and big barbecues taking place in the parking lot. It was a whole new experience for me.

We were even allowed to go into the garages while the engineers worked on the cars, we weren’t allowed to take pictures under the hood, but everything else was fair game. We were warned to be aware of our surroundings, because we were in their space and we had to get out of the mechanics way and not hinder them. 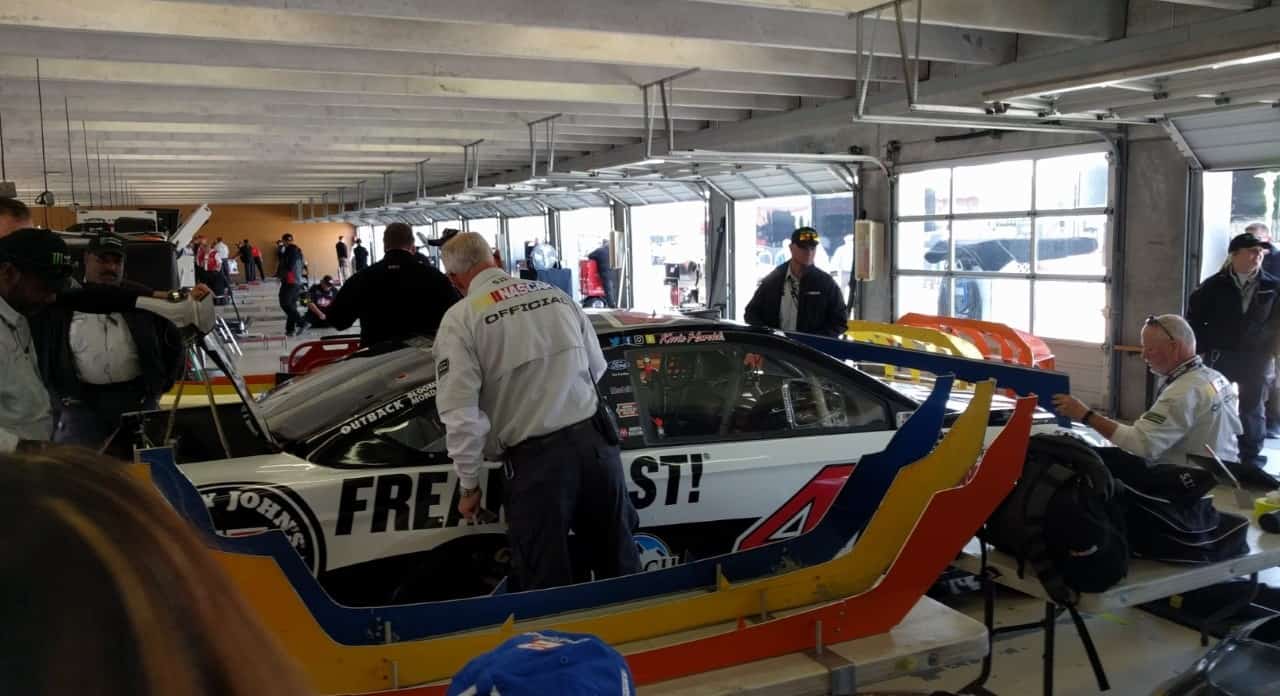 It is pretty amazing how much access fans can get, with the right passes of course. We were in the pit lanes as all the cars were pushed out to their staring positions, during the driver introductions, and even saw drivers getting into the car, merely feet away, minutes before the start of the race.

Before the race, we went to the VIP suite upstairs to meet the rest of the Cox team and executives. The view from the top was pretty amazing and the food and drinks were excellent. Brad Keselowski and Joey Lagano also made short appearances into the suite, answering a few questions and taking pictures with fans.

The start of the race was pretty exciting, I knew these cars were loud but didn’t expect them to be this loud, especially in the pit lane. Thankfully we were provided with ear protection and after about 20 or so laps we made our way back into the suite to watch the race. 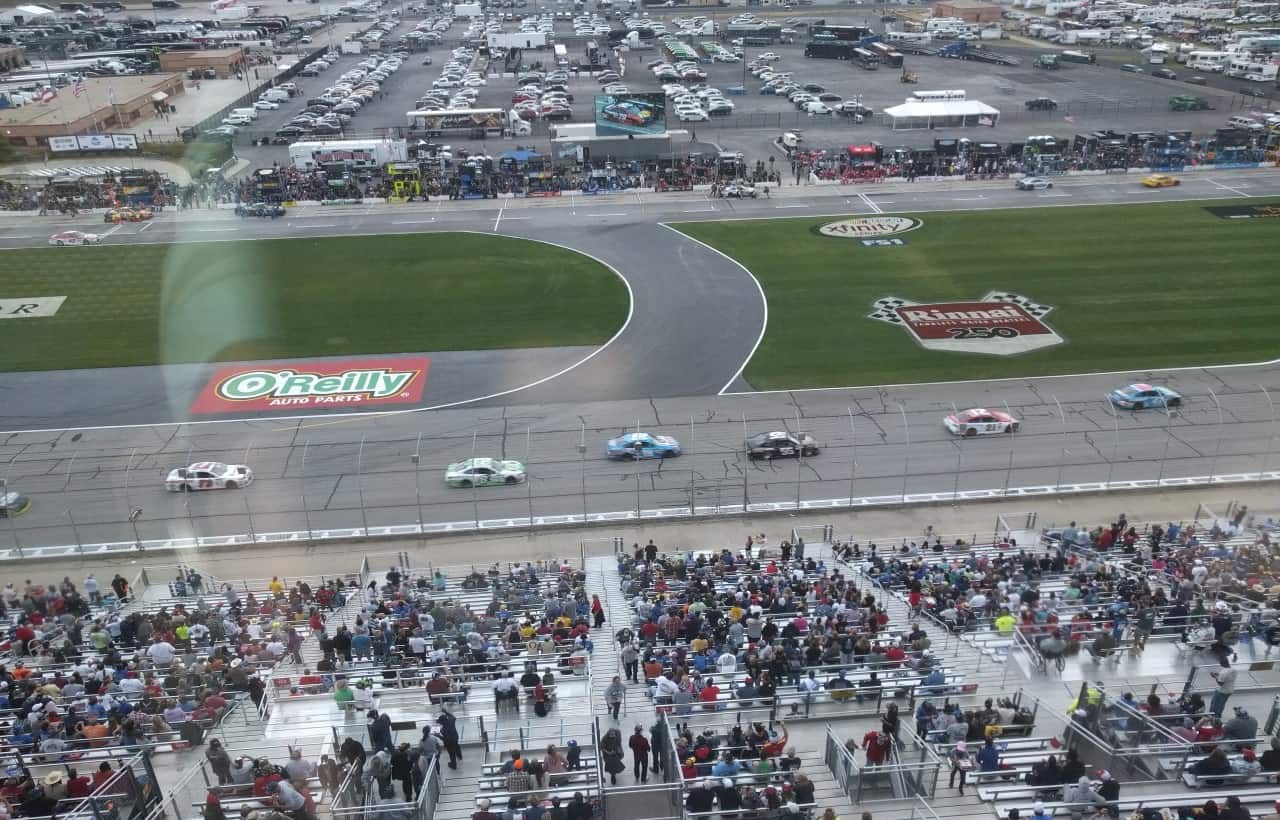 The race itself was pretty exciting, with Brad running around in the top 5 for most of the race, coming in 2nd and 7th in the first two stages of the race. The 3rd stage was the exciting part, where he was very close to the front, running in the top 3. Around about 60 laps to go (out 325), with a caution out, everyone pitted and Brad came out first, only to find out the lug nuts on the left rear wheel were loose and he had to go back in to tighten them. Pushing Brad to the 14th spot, this is where I thought it was over, but not so.

Brad fought his way back up the order, with another caution and pits, he came out around the 8th position, another caution a few laps later and he came out in 4th position. Things were staring to get interesting, especially after Kevin Harvick, the guy that dominated the race was told he had gone over the pit lane speed limit and was handed a penalty, pushing him back to around the 12th position. I knew at that point Brad was going to win the race, because he had been faster than everyone else in front of him and with 5 laps to go, he went around the 42 car of Kyle Larson and the rest is history. 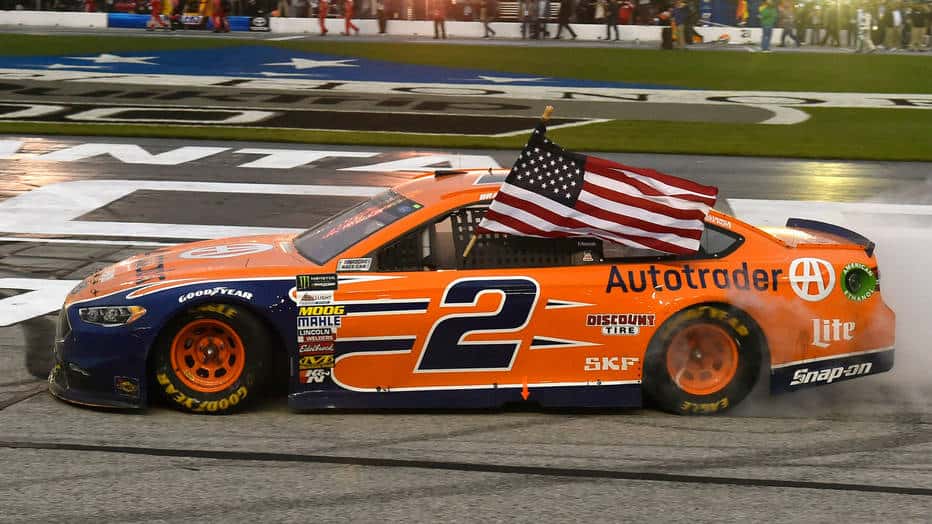 It was a great end to a great weekend. Autotrader only sponsors the #2 car for this and three other races, to win, and win from behind was pretty awesome and the entire team Autotrader was jubilant. I was very happy for the team and for Brad, who was a very nice guy and fun to talk to. It was my first NASCAR race and I did it in style thanks to Autotrader.

7 Things I Learned at a NASCAR Race

In typical NASCAR fashion, I’d like to thank team Autotrader and Autotrader car #2 of Brad Keselowski of Team Penske at the Atlanta Motor Speedway for the Folds of Honor Quiktrip 500 race of the Monster Energy NASCAR Cup Series, for all their hospitality and the great access they provided us throughout the weekend.

Originally published on March 15, 2017 in Autos