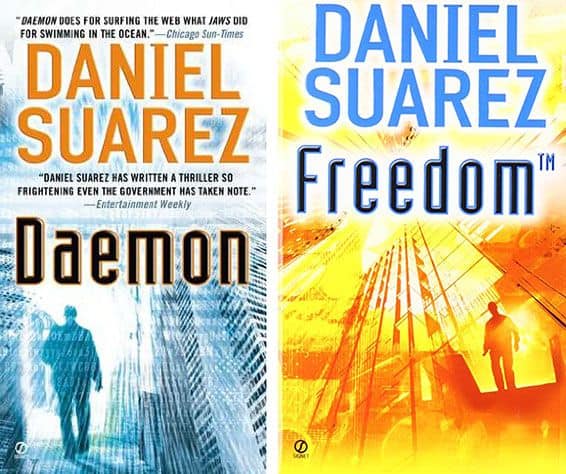 I’ve had a real hankering for Sci-Fi the last few months.

Actually, if I’ve being completely accurate here, I’ve almost always got a hankering for good Sci-Fi. There’s just so much bad stuff that when I find something good – like Daemon and Freedom by Daniel Suarez – I’m really, really excited.

So without further adieu, so I’m going to try and give you a slightly extended elevator pitch on the series. Though connected, the two books are vastly different, so I’ll give a brief synopsis of each and then sum up why I find the series (and hopefully Daniel Suarez’s future work) most excellent in a number of areas.

Daemon starts off by following the investigation of various murders at a wildly successful video game company. No, please… don’t run away yet, I swear it’s not that cheesy! What quickly follows is a story about a daemon (think computers, not hell beasts) that I find impressive in its scope.

Even more exciting is that all the technology you’ll read about is both plausible, and even already available. As William Gibson has been quoted as saying a great many times, the future is here… it’s just not widely distributed yet.

Freedom picks up shortly after Daemon ends, and I think you’ll find almost immediately that the entire tone of the book has changed. Where Daemon was largely a book of build-up and investigation, Freedom throws all the chips on the table.

But don’t worry, it’s still packed with interesting technologies and philosophical exploration. In fact, even more so than the first book.

So, you basically can’t tell us anything?

Yeah, pretty much. I hate fluff, but I also can’t say much without spoiling the books. So let me try and summarize why I found these books so powerful.

Daemon and Freedom, and pretty much everything that comes from the mind of Daniel Suarez, takes these technologies that we’re just now starting to worry about, like unmanned drone killings and rapid decentralization, and projects them forward just a few years into what I believe is an extremely compelling and perhaps ultimately accurate narrative about the future.

Only time will tell of course, but I’ve found that Daniel Suarez is one of the few authors that has managed to do this without veering deeply into the cheesiness I’ve found in so many Sci-Fi novels.