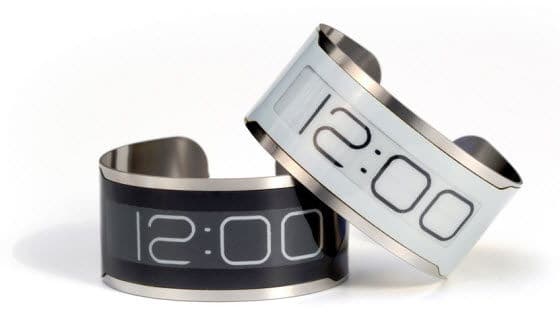 Over the years, we’ve written about dozens upon dozens of watches ranging from affordable to the not so affordable. Today’s featured watched is a Kickstarter project and is the world’s thinnest watch. And when they say thinnest, they really mean it. The E Ink display is placed on a flexible stainless steel band which measures in at only 0.8mm thick.

The CST-01 is a minimalist watch that is refined, simple, and sleek. All of the components for the watch have been etched into a 0.5mm stainless steel band. To make the watch as thin as possible, there are no knobs and buttons on the device. Settings the time and even charging the watch is done on a separate base station which is included. The CST-01 watch can also be viewed in a 24 hour time format and this feature can be changed from the base station.

The CST-01 watch is supposed to weigh in at 12 grams which is less than five pennies. After a while, I forget that I’m evening wearing a wrist watch and with this, that feeling would definitely set in a lot sooner. The watch features MEC (Micro-Energy Cell) which is what powers it. The cell in the watch can be charged 10,000 times and will last 15 years (not on one charge of course). The company predicts that the watch will need to be charged approximately once per month.

The watch and the base station are expected to cost $179. You can support the project by placing an order now and get a special price of $129.