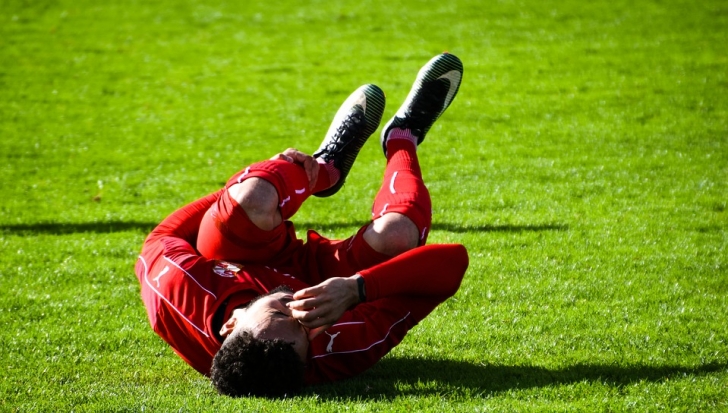 Being a top soccer player is about matching natural talent to a supreme drive for self-improvement. But that’s not all you need to succeed — you also need a little luck and that’s certainly the case when it comes to staying injury-free.

Many great players have been cut down by fitness issues in their careers, some of which never even got the chance to prove themselves at a professional level.

I’ve picked three international stars who did enjoy genuine personal success, but could have expected so much more if they’d not been ravaged by injuries.

Some soccer fans have grown up knowing one Ronaldo – Cristiano, the greatest European player of all time. But he wasn’t the first soccer star of his name and his Brazillian predecessor may have been even better, if it wasn’t for injuries.

Ronaldo was part Brazil’s 1994 World Cup-winning squad, going to the USA as a gifted 17-year-old. However, it was two years later when he exploded.

Ronaldo moved to Barcelona, won the FIFA World Player of the Year, and had one of the greatest individual seasons in history.

More individual honors followed and he looked set to dominate soccer for the next decade.

Then came the injuries.

First, he had a convulsive fit hours before the 1998 World Cup final. Then he suffered a number of serious knee injuries, robbing his game of its explosiveness.

Ronaldo ended his career as a world champion, league winner, and phenomenal goalscorer. But injuries cost him the chance to be even more successful.

In fact, I’m confident that if you used one of the best betting apps listed on this UK article to check the chances of a fit Ronaldo beating Cristiano in a GOAT poll he’d be the one with the best odds.

Sebastian Deisler played fewer matches in nine seasons than many professionals now manage in three and was absent from the biggest games.

However, you don’t earn the nickname Das Supertalent (the super talent) without having bags of ability.

Deisler was a right-sided attacking midfielder with supreme vision, technique, and creativity.

He signed for Bayern Munich on 1 July 2002, the day after Die Mannschaft lost the World Cup Final to Brazil, and was predicted to be the man to lead his country to success.

His career at Bayern was cursed from the outset. He arrived injured and would rarely enjoy a period where he was completely fit. Deisler suffered various knee injuries and spent several months receiving treatment for depression from 2003-2004.

Deisler retired in January 2007, having just turned 27 but spent the majority of his career ravaged by injury. While he’ll no doubt be happy with the eight trophies he won during his time as a professional, Deisler could have enjoyed so much more personal success.

Indeed, were he to of had greater luck with injuries then willing to bet he’d have won at last one FIFA World Player of the Year.

England has been blessed with some great central defenders since the turn of the millennium. Sol Campbell, Jamie Carragher, John Terry, and Rio Ferdinand are all champions that could have graced almost any team on the planet.

But perhaps the greatest of all is the one with the worst injury record – Ledley King.

Spurs fans certainly believe King was the finest of the lot, singing “he only had knee / He’s better than John Terry.”

It’s easy to believe that club loyalties and the fondness of absence gave them a rose-tinted view of King, but there’s truth to their words – King was the most naturally talented of England’s center backs.

However, King was so plagued by knee injuries that he was unable to train more than once a week for the majority of his career.

His knees were so bad that just walking was an issue, as his former manager, Harry Redknapp explained: “There’s no cure. There’s no cartilage, nothing to operate on. It’s just bone on bone.”

Ledley King finished his career with one trophy, and just two Champions League appearances to his name. Between them, Campbell, Carragher, Terry, and Ferdinand won 13 Premier League titles and 3 Champions League finals.

Were King to have had any cartilage in his knee then not only could he have played alongside one of his trophy-winning peers, but he would also have been the best defender in the pairing.

Ronaldo, Sebastian Deisler, and Ledley King all won trophies and the former was even named the greatest player on the planet.

But they earned their personal successes in spite of crippling injuries.

Were they to have enjoyed the fitness levels of James Milner then things would be different – we’d now be talking about the finest central defender of his generation, top German outfielder of his era, and greatest soccer player of all time.

Originally published on June 1, 2020 in Entertainment