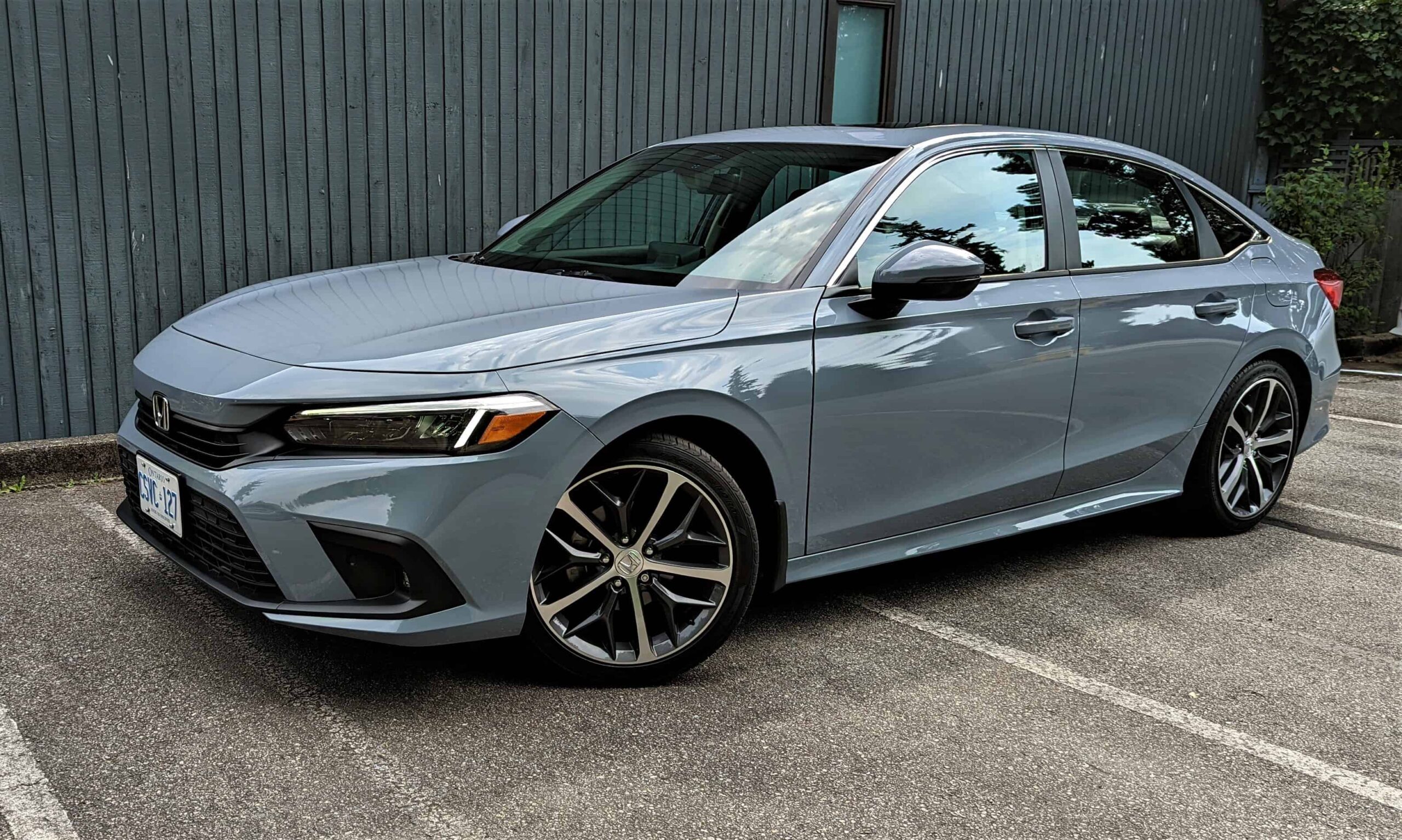 The Honda Civic was first introduced in 1972 as a subcompact car. It was designed to be an affordable and fuel-efficient vehicle, and it quickly became one of the most popular cars on the market. Over the years, it has become larger with each new generation and it’s currently classified as a mid-size car. The Honda Civic has kept up with the expanding waist sizes of North American customers.

In 2021 Honda introduced the 11th generation of their most popular car as a 2022 model year. 2022 marks 50 years of production of the Civic, with over 27 million units sold worldwide, giving the Civic a special place in the history books.

Last week I had the opportunity to review a 2022 Honda Civic Touring and see whether the Civic will be the best-selling car in Canada for the 24th consecutive year.

The 11th generation Honda Civic is offered as a sedan and a 4-door hatchback (or is that a 5-door?), the Civic Coupe is no more because of a lack of sales. I thought the Civic Coupe was quite sporty; it’s a shame it won’t be available anymore. However, the Civic SI and the Civic Type-R are still live and come with manual transmissions, which is great news for car enthusiasts.

Like the previous generation Honda Civic, the 11th generation Civic is offered with two engine choices: A naturally aspirated 2.0-liter 4-cylinder, producing 158 horsepower at 6,500 rpm and 138 pound-feet of torque at 4,200 rpm. These are the exact power figures for the outgoing model we reviewed here. This engine is available on the LX, EX, and Sport trims.

If you’re looking for more power, you can wait for the Civic Type-R, which is still alive and kicking, featuring new looks and even more power than before. The 2022/2023 Honda Civic Type-R will be powered by a 2.0-liter 4-cylinder turbocharged engine, producing 315 horsepower at 6,500 rpm and 310 pound-feet of torque between 2,600 to 4,000 rpm. The only available transmission will be a 6-speed manual.

Although both of the engines are the same, there are some differences in the new 11th-generation Civic’s engines. Both engines come with a stop/start feature, which should save some fuel, and the ability to choose different driving modes. The old Civic came with an “Econ” button that reduced the throttle response, which didn’t feel like having driving modes. Technically the Civic had two modes, normal and eco. But now you can choose between eco, normal, and the new sport mode. The first two modes have a similar feel to the 10th generation Civic, but the Sport mode makes the drive more fun with better throttle response. There is no change in steering or suspension feel, which is expected in a vehicle in this class.

Driving the Civic around town feels like the old Civic, which is a pleasant experience. However, the body has been stiffened, and the suspension is tuned for a sportier feel. The Civic feels quite sporty and is enjoyable to drive. I mostly drove it in the normal mode; driving in the Eco mode in the city made the car feel sluggish, but this mode is perfect for long boring stretches of road. The Sport mode is fun to drive in; it improves on the normal mode.

The biggest difference between the 10th and 11th generation Civic is the exterior and interior design. I was never a fan of the 10th generation Civic, the design did grow on me a bit, but I still felt it was way too busy of a design. The 2022 Honda Civic removes all the useless lines in the bodywork and gives us a fresh-looking understated design.

I know this is subjective, but I think the Civic looks quite good now. The design looks like it takes inspiration from the Honda Accord, which is especially apparent at the front. The Accord has a chrome bar above the front grill, which the Civic doesn’t have. Otherwise, they look identical.

The bodywork features a character line above the door handles that spans the car’s entire length. The headlights are sharp looking with angry-looking daytime running lights. The front features a clean design with split grills and fog lights. The taillights are quite large; I personally would’ve preferred them to be smaller and match the design of the headlights.

The 2022 Honda Civic comes with a completely redesigned interior; the old interior wasn’t bad, and the new one is just a fresh take on the interior. Unlike previous generation Civics, the infotainment screen isn’t integrated into the dashboard; it now sticks out. Most/all auto journalists used to complain about this type of design, but it seems to have grown on everyone and this is now the norm in almost every new car.

New additions to the Civic include an all-digital gauge cluster on the Touring trim, which is partially digital on lower trims. The Civic also has a wireless charging pad (Touring trim) for the first time. The Civic is also offered with wireless Apple CarPlay and Android Auto, a feature I’ve seen on more expensive cars. Another first for the Civic is a heated steering wheel, which will be greatly appreciated in the frigid cold Canadian winters.

One thing I didn’t see on the 11th generation Civic was the “Lane Watch” feature, a camera under the right mirror, showing the right side of the car when the right turn signal was activated. I liked this feature, and I believe Honda was the first carmaker to offer it; other carmakers have started using similar features in their vehicles; I’m not sure why Honda got rid of it.

Our car came with a 9” touchscreen, 7” is the standard size on lower trims, which was relatively responsive and had good graphics. The touchscreen is easy to understand and took no time to get used to. Below the screen is a honeycomb treatment on the dashboard, running across the dashboard. The design hides the air vents and is a unique look. Below is the section for climate control, which is also easy to use and self-explanatory. I’m glad Honda has kept it simple and not integrated the climate control system into the infotainment system, hidden within multiple menus.

Below is a small storage compartment with a wireless phone charger, a pair of USB plugs, and a 12-volt outlet. The center console features a gear lever, a pair of cup holders, a drive mode selector, and the stop/start button.

The digital gauge cluster features crips graphics with large numbers that are easy to read. There isn’t much customization available here.

The interior is also improved in terms of NVH (noise, vibration, harshness); the interior is quieter and more comfortable than the outgoing model. Not much engine noise makes it into the cabin, and the cabin is well insulated from outside noises. I did notice tire noise at highway speeds.

I think Honda has done a great job with the 11th-generation Civic. The Civic is a much-improved car over the previous generation car; I know styling is subjective, but to me, it looks much better. The interior is quiet, roomy, and has a fresh design. The Civic also has excellent driving dynamics; the CVT feels like a traditional automatic transmission, making the drive even more enjoyable. So, will the Civic be Canada’s best-selling car for a 24th straight year? I feel it will take the honors and probably be the top seller for years to come.

Check out Honda Canada’s official website for more information on the new Civic.

3 Tips for Using Scent Diffusers in Your Car

How to Get Ripped By Next Summer