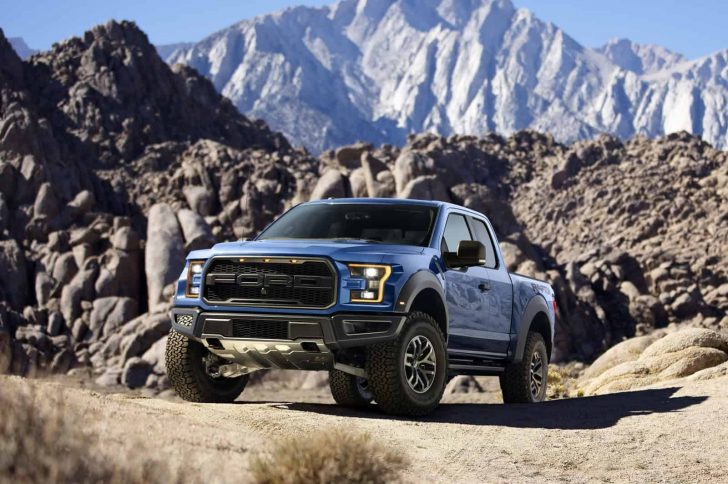 Ford first revealed the redesigned 2015 Ford-150 last year but didn’t mention a word about plans for a new Raptor performance model leaving enthusiasts scratching their heads and a bit disappointed. Well, they can come out of their rooms now with the unveiling of the 2017 Ford F-150 Raptor at this year’s Detroit Auto Show.

The new F-150 Raptor will be powered by a twin-turbocharged 3.5-liter EcoBoost V-6 engine and mated to a Ten-Speed automatic transmission which has been in development for sometime now. No details on the power output from the twin-turbocharged 3.5-liter EcoBoost V6 but we do know it will produce more power than the outgoing 6.2-liter V8 which puts down 411 horsepower and 434 pound-feet of torque.

And you can bet it will also be more fuel efficient as that seems to be the trend with the entire Ford lineup of vehicles. Combine the fuel efficiency of the EcoBoost with the weight savings from the new F-150’s aluminum body and we should have something interesting on our hands. According to Ford, the new F-150 Raptor will be 500 pounds lighter than the current Raptor.

The exterior of the vehicle features bits and pieces from the current current Ford Raptor such as the ‘FORD’ stamped front grille and fender flares. I personally do not like the back of the vehicle where a massive ‘FORD’ stamp is located. But overall, I do love how tough the vehicle looks and how it presents itself. Competing trucks have slightly modified versions to compete with the Raptor but this truck is in a league of its own and built from the ground up to be tough.