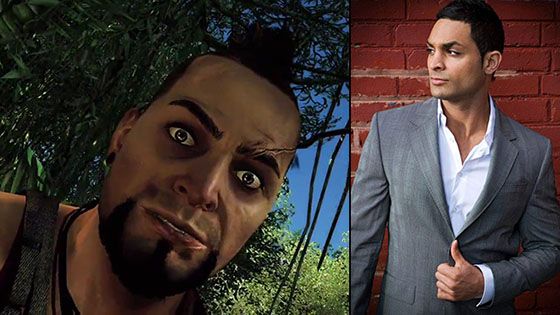 Interview with Michael Mando – The Voice of Vaas

I don’t often conduct interviews with people, but when I do, I shoot for the very best. Today I’m excited to bring you an interview with the very talented, and incredibly awesome Michael Mando. Michael is the voice and persona behind Ubisoft’s upcoming shooter Far Cry 3.

Michael has been extremely busy with E3 and all the much deserved acclaim he’s been receiving, but he was nice enough to take time out of his extremely busy schedule to answer a few of my questions via email. I hope you enjoy the interview.

Unfinished Man: Michael, tell our readers a little bit about yourself. In particular, why did you decide to start acting?

Michael Mando: I had to take a semester off university after my mother was shot in a robbery, and was looking for something to keep busy. I had never done anything in the field prior to my mid-twenties, but my father thought it would be a good idea since I couldn’t commit to anything. I landed my first three auditions while still at a theater program I had joined, and quickly realized that I could do this for a living. Life is like a pinball machine and I am very, very grateful for my bounces… I am humbled by all that is happening.

UM: What was it like playing Vaas in Far Cry 3? Any unique challenges with the role?

Michael: Vass was a very personal experience. I was going through a heartbreak at the time and put all my energy and emotional confusion into the role. The major challenge was finding a mental balance after I’d spent full days picking at those emotions.

UM: Was it strange seeing yourself in a game with a Spanish accent? I’ve heard they initially called your character “Lupo”, and then changed it to Vaas.

Michael: I’m quick at putting myself down and pissing at my work – it’s something I need to improve. It’s only after my brothers reacted positively to Vaas that I felt proud. Yes, it’s true he was initially called Lupo… They were having a lot of trouble matching my facial muscles to the graphic designs they’d done, which is why they made the jump to basing him on me physically. It was also really cool that they’d never done that before – the name, Vaas, came with the new model.

UM: Do you ever suggest changes to dialogue when working on a role? Any suggestions for Vaas in particular?

Michael: I was given complete freedom with the dialogue and blocking of the character. Vaas was based on improvisations I had done for Ubisoft, and they wanted me to infuse the essence of those performances in everything I did. It also helped that I really liked the writers work, Lucien Soulban and Patrick Redding– they did a fantastic job.

UM: Are you planning to do more work in the video game industry? What’s it like compared to working in film and television?

Michael: Yes, I am very interested in continuing work in the video game industry, it’s quickly taking a huge chunk of the film market and I love the innovative and down to earth qualities of game designers. I also feel that a story about the origins of Vaas would make a great feature film…

UM: You moved a lot by the time you were 20. Was that a positive experience for you? I moved 11 times before I was 15 years old.

Michael: Moving is a positive experience in terms of all the emotional and psychological knowledge you can gather. You get to see people of various cultures and languages living in different environments. The negative aspect is that there is no place to call home… I always feel like my roots are floating around somewhere.

UM: It seems like Red Barlo Productions is going quite well for you. What are your plans there for the next few years?

Michael: Thank you. Red Barlo is currently in postproduction of a 25 mins. short film, Abyss of The Mind, and in production of a music video, Gone, for my brother and music producer, Aiman Beretta. I am very excited about both. We are also currently developing a feature gangster-drama that I want to shoot in a few cities including Montreal. Producers are welcome to contact me J

UM: You look incredibly built in many of your promo shots. Is that something you put a lot of work into? Any suggestions for our readers?

Michael: Thank you, that is very kind of you. Conditioning is something that I’ve been around since an early age because of sports. My advice is to approach fitness as a way to better yourself in every aspect of life, as opposed to just an esthetic thing.

UM: Do you have any advice for aspiring actors? I auditioned for a Hot Wheels commercial as a child, and sadly I never became a star.

Michael: Lol. I believe that if you follow your dreams, roads and lessons will slowly start revealing themselves to you… Everybody needs something different, and the miracle of life is that it will always send you the challenges you need, to teach you what you need to know. Stay positive, and like Richard Pryor would say, “don’t forget to keep a little sunshine in your heart”.

UM: Anything else you want to tell our readers?

Michael Mando: Please feel free to share your opinions or questions about Vaas, FC3 or anything else regarding what I do on twitter @MandoMichael and my public Facebook page, I check both often. Cheers, thank you for your L.O.V.E. and support – and hope you’ll love the game!

Michael, thank you so very much for answering my questions, and I’m looking forward to pestering you more in future. I know how busy you are, so I’ll leave you alone… for now. As Michael mentioned above, feel free to contact him with any questions you have, and I know he’ll do his best to answer them.