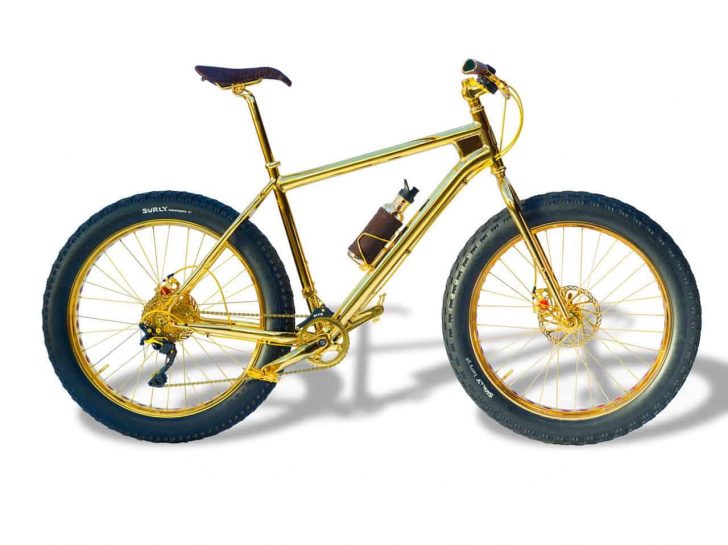 I’m not one of those people that would “hate” on someone for spending their money on lavish things like expensive cars, watches etc. I see way too many of these “haters” on YouTube commenting on videos of people enjoying their Ferraris and Lamborghinis. I say good for them, it’s their money and they can spend it as they like… but there are some lavish items that make me scratch my head…

Take, for example, this bicycle made by The House of Solid Gold and Dan Bull from Iditabike. The bike is called “The Beverly Hills Edition”, and is made out of gold. I like gold as much as anyone but to put it on a bike just seems a bit much. Oh, and the bike’s price tag, you can buy a handful of exotic cars with it.

How much does this bike cost? $1,000,000, that’s one miiiiiiilion dollars!!! The bike’s entire frame and wheels are overlaid with 24k gold, making it not only the most expensive bicycle in the world but also the blingiest too. But having just a golden bike isn’t enough for people that can spend a million bucks on the bike, so the designers added a “THSG” plaque on the bike that consists of 600 black diamonds (6.0 carats) and 500 golden sapphires (4.5 carats). Of course, the seat can’t be covered with some lame cow leather; instead, it’s covered with brown alligator leather. Making this bicycle the “king of bling” in the bicycle arena.

Proceeds from the world’s most expensive bicycle are going to a non-profit organization called The Way to Happiness; only 13 of these bicycles will be produced, each with an individual numbered engraving. Via: THSG