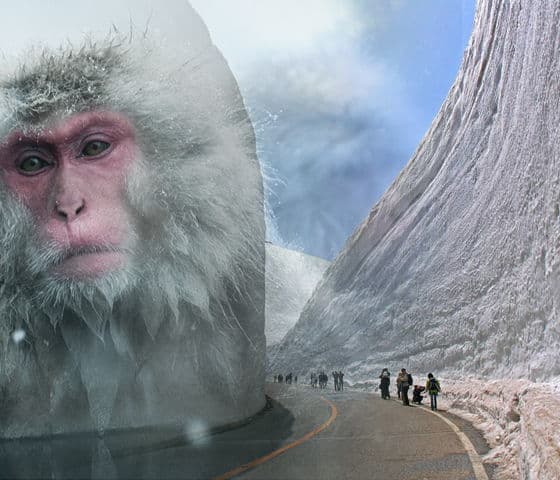 Winter is Already Here – The Wall is in Japan, and It’s Manned by… Snow Monkeys

Game of Thrones is over for another season, but I’m still hearing people mutter, “Winter is coming” all over the place. While I suppose we could say that it technically is, as the weather gets warmer it’s harder to picture icy walls wreathed in mist and shuffling snow zombies heading south to break up our bikini beach parties. However, it’s got me thinking: where could I head to enjoy the best of the winter season, fantasy-like scenery, and not getting murdered with extreme prejudice by George R.R. Martin? Why, Japan of course!

Since ol’ George has a lot more writing on his plate, Japan has got us covered with unsettlingly human-like snow monkeys who’ll share their spa with you, and walls of snow upwards of 50 feet high.

Even though every image of Japan that I’ve ever seen has majestic, snow capped peaks in the distance, I never really thought of it as a winter vacation haven. It’s currently on my must do list because of light and airy spring blossoms and intriguing culture. However, if you’re into winter sports, the niseko powder connection is something you need to check out. But for those of you who are accident prone and know skiing or boarding will kill you just as surely as G.R.R. would, don’t worry- there are still some incredible sights to be found in the cold. You can visit the wall, and you don’t even need to give up women or be chased by white walkers!

Apparently, the snow monkeys (who actually look sort of like a cross between regular people and bizarre frozen zombies) are much friendlier. Don’t believe me? Check out this almost live snow monkey cam that updates every minute or so- they’ll happily pose for pictures and will totally chill out in a natural hot spring with you. When not being totally cool with you hanging out in their bath, the snow monkeys spend their free time looking like they have fur parkas as though they’re little wildlings.

Truthfully, the snow monkeys aren’t actually on the giant icy walls of the Tateyama  Kurobe Alpine Pass, but they’re out in the snow and ice and I’ve been drinking so just cut me some slack and enjoy some ridiculously awesome pictures. These incredible shots of the japanese snow monkeys were lensed by photographer Ron Gessel, who has quite a few awesome travel albums that are worth poking around in.

I’m pretty sure after writing this that Chad has already booked us flights to Japan so we can head to Jigokudani to pick him out a new snow monkey best friend. Just promise me you’ll remember us fondly on the off chance one of the impish little devils murders us in a complex plot of intrigue while we’re  north of the wall.