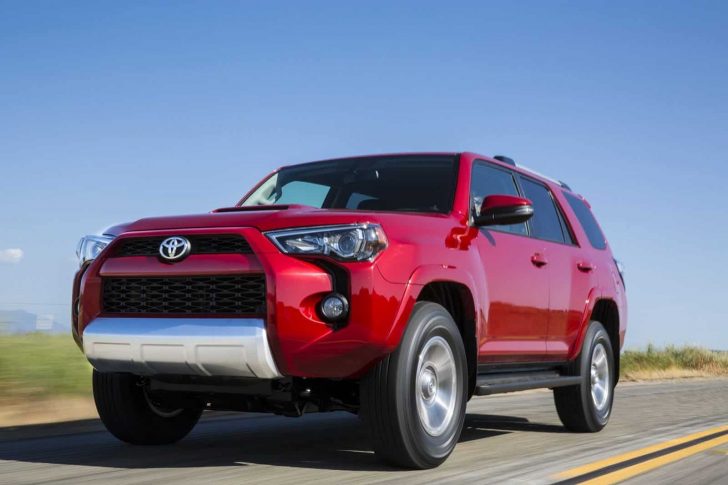 I admit that when I first saw pictures of the 2014 Toyota 4Runner, I was a bit speechless. Usually the outgoing models are replaced by better looking vehicles but it’s a different situation here for the 2014 Toyota 4Runner. My initial thoughts are not positive about the 2014 model but it is possible I will start to like it at a later date. Toyota revealed the fifth generation 4Runner at the Stagecoach Music Festival in California near Palm Springs.

The 2014 Toyota 4Runner is pretty much the same as the previous model but the front fascia of the SUV has been changed to give it a “tougher” look as well as interior changes and some technology updates for the interior. The front now has a more aggressive and rugged appearance with its large front grille and smoked headlamps. The model seen here is the “Trail” edition which also features the hood scoop and painted bumper accents in silver.

At the rear of the vehicle, the taillights are now LEDs on all models which I personally am not a fan of. For the interior of the 2014 Toyota 4Runner, the company has introduced an all-new Optitron instrument panel with multi-information display.

The 2014 4Runner will be available in three trims which includes the SR5 (base model), Limited (fully loaded), and Trail which is geared towards those who are looking for off-road capabilities. The base, SR5, and Limited models will also have an optional third-row seat arrangement allowing the 4Runner to seat seven people.

The Toyota 4Runner Limited will feature black 20-inch alloy wheels while the SR5 and Trail ride on 17-inch allow wheels featuring a new design. All models will have a full-size spare tire/wheel. The 4Runner Limited will have automatic dual-zone climate control system while the SR5 and Trail models will have air conditioning without the auto climate-control. The Limited model will also come standard with leather-trimmed interior including ventilated and heated front driver/passenger seats.

When it comes to powertrain, the 4Runner will have a 4.0-liter V6 gasoline engine producing 270hp and 278 lb-ft of torque. The transmission used is a five-speed ECT-i automatic which can also be found on the previous model. The drivetrains include a 4×2 model, part-time 4×4, and a full-time multi-mode 4×4 with a locking center differential.

Maximum towing capacity for the 2014 Toyota 4Runner is 5,000 pounds. No details on pricing are available at the moment.