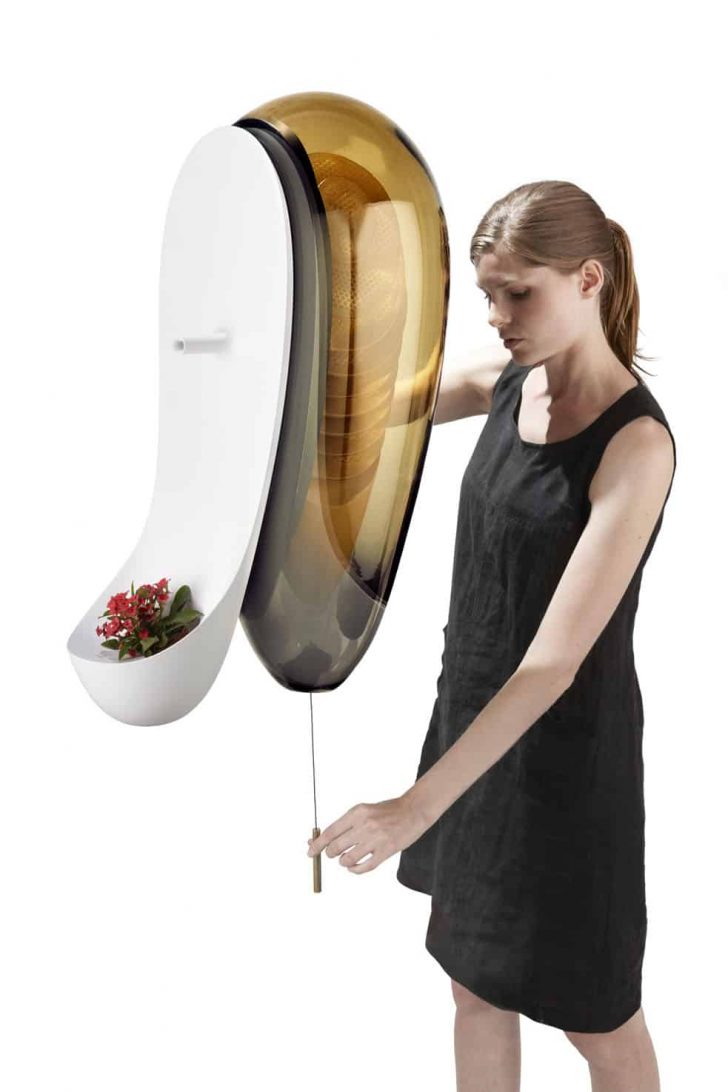 The Philips Urban Beehive – I, For One, Welcome Our New Bee Overlords

Bees are awesome, industrious, peace loving little creatures that have had the misfortune of being on the wrong end of most of our wireless technology, and have a bad rap from people who flail around a lot. The Philips product concept for the Urban Beehive is supposed to bee (oh god why I’m so sorry) a way to help our buzzing buddies to establish a foothold in the concrete jungle and allow us to harvest honey and propolis right in our own homes, fostering an understanding between our species. I think the design is absolutely phenomenal, and way freakin’ cooler than an ant farm, but a small part of me wonders just what the hell these people were thinking when they created this. 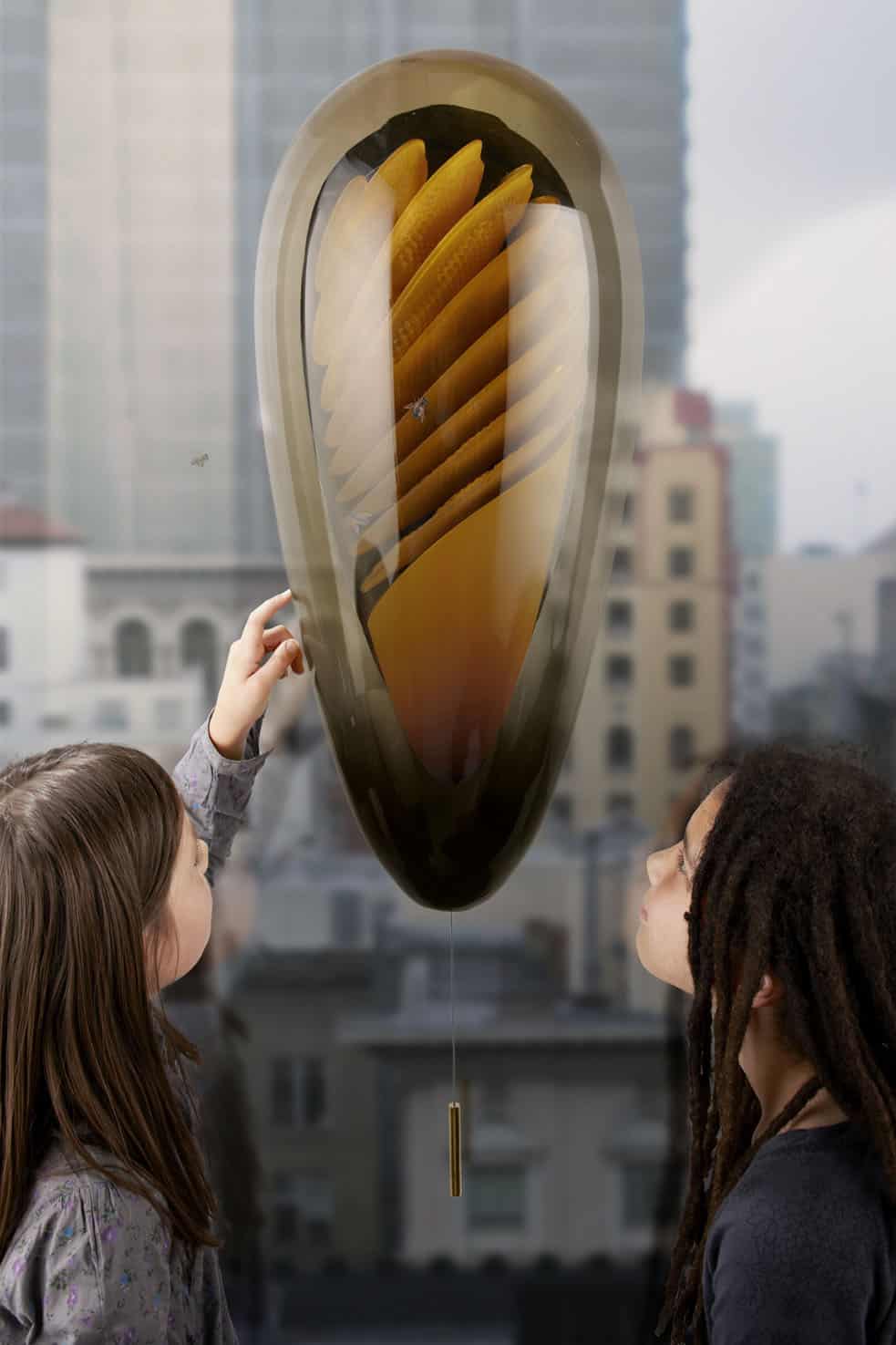 It’s not that I don’t like bees, and it’s definitely not that I don’t think it’s a crucial endeavor to help stabilize their populations while creating ways to harvest your own organic products. It’s also not that I don’t think I would really enjoy watching them build combs and do neato bee stuff like the shuffle dances I learned about on the Magic Schoolbus. In fact, it took a discussion with a buddy about wanting one of these when the Urban Beehive prototypes went to market for me to realize something. It’s bees. Bees in your house. In fact, his exact argument went something like this: “Dude, bees are dicks. Bees don’t even CARE.” This was followed by a discussion of bee beards and bee pubes and bees in your food and bees that hide in your toilet just waiting for you to sit down, and even the possibility of spontaneously Africanizing bees that thirst for blood. This is probably the exact mentality that Philips is trying to help stamp out, but I have to admit, he makes a good point. 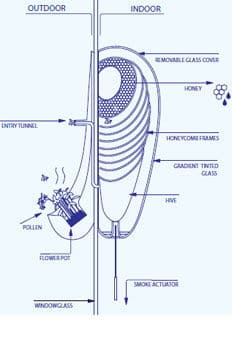 From Philips: “This is a sustainable, environmentally friendly product concept that has direct educational effects. The city benefits from the pollination, and humans benefit from the honey and the therapeutic value of observing these fascinating creatures in action. As global bee colonies are in decline, this design contributes to the preservation of the species and encourages the return of the urban bee.”

The whole Urban Beehive design is slick and modern; it looks fast and spacey, with gentle curves and aggressive lines. Overall, it’s a pretty manly piece of work. The smoked glass looks automotive, and actually filters the orange light wavelength that bees use to see. The combs are arranged aesthetically, because those fuzzy stripey little bastards can’t be trusted not to mess up your feng shui. That little bell dongle-jigamadoo is your smoke actuator. The idea is, you pull the string, a gentle smoke is used to calm the bees, and you reach in and harvest the wonderful ambrosia of sweet honeycombs filled with natural, pure honey. Unfortunately, I don’t foresee this happening.

Since this fantastic idea is still only a concept, and there are always hiccups when adopting a newly designed product, I can’t help but hypothesize how it’s actually going to work. You’ll get a craving for honey, so you give a little tug on the cord to get your smoke actuating… and you dislodge the cover, or maybe jiggle the bees around. You’ve got a soothing mist like smoke leaking into your home, but the bees aren’t as calm as they should be because you’re some uninitiated man-bear reaching into their homes to destroy everything they hold dear. Your smoke alarm starts going off, and through the weirdly shifting mist the filtered light from the window is illuminating this alien egg sac full of angry bees driven mad by your presence and by the shrill vibrations of the alarm. At this point you’ve cracked the cover, and there are bees that have defensively flown out of the hive, into the sanctuary that was your happy home (which is now actually a smoke filled death trap that’s also filling with bees. ) This is where most people start flailing, further enraging the bees and likely damaging anything within a ten foot radius. Your screaming and wild gesticulation will go unnoticed amidst the choking smoke, blaring alarms, and the thunderous buzzing of a cloud of pissed off stinging insects. You’ll likely flail into the hive itself, and since you have to cut a hole in the window to mount the unit and put the bee entrance tube through, the structural integrity will be compromised. They’ll find your splayed body on the pavement below, surrounded by glass shards, bee corpses, and the same innocently delicious honey that you and the bees endeavored to create and share together.

…So maybe this isn’t that great an idea.

I may or may not have gotten carried away here, and I do really think that this is an awesome idea and would actually love to have one in the future. However, I know I’m going to get a bunch of hate mail for this, so come on- there’s no guy who can say he wasn’t thinking something similar as soon as he saw the pictures of the Philips Urban Beehive. I think I’ll stick to the little plastic squeezable bear for just a little while longer.