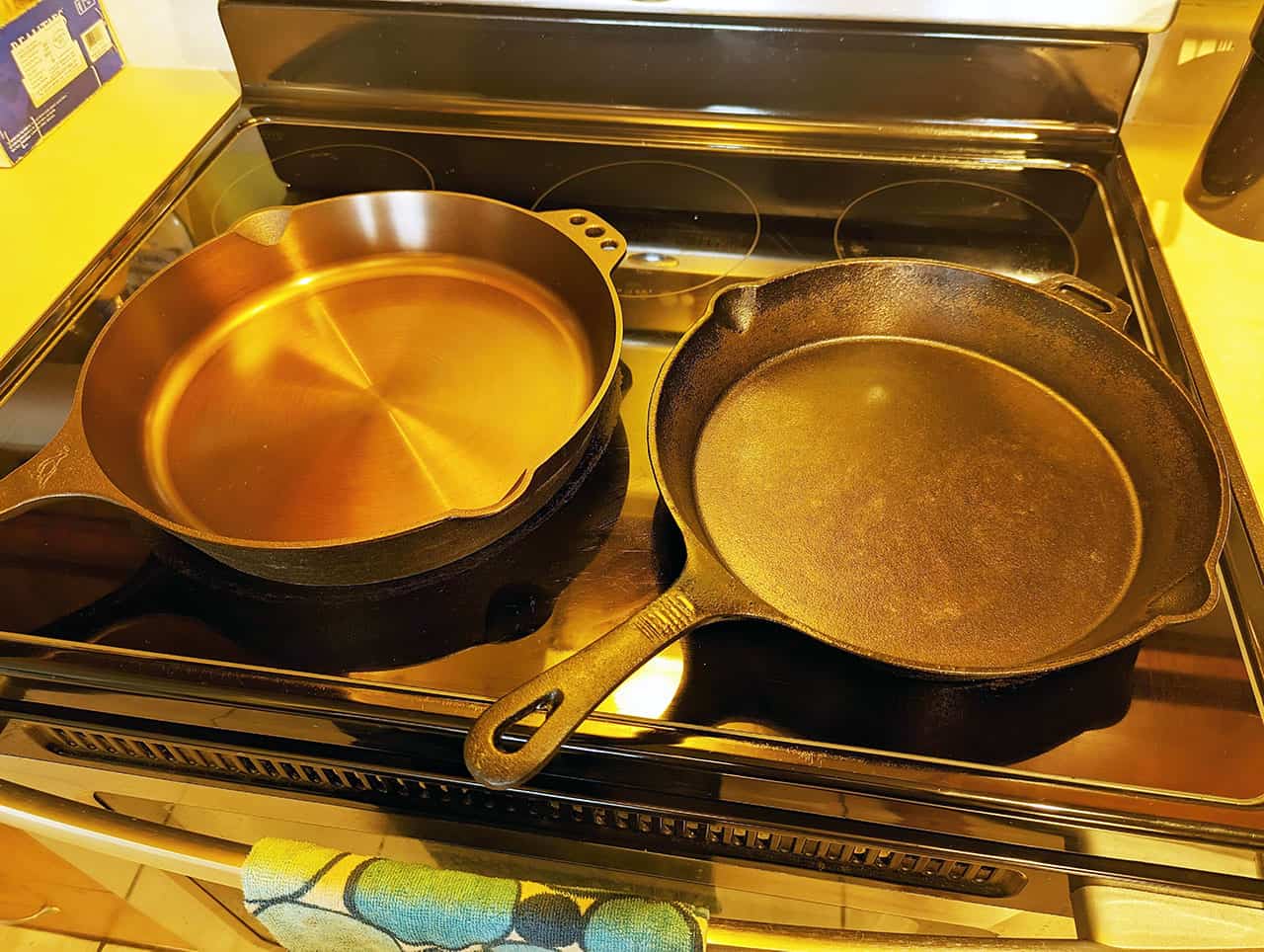 In this article, I’ll explain why pre-seasoning is essential and why it’s worth spending the extra money on a pre-seasoned skillet. I’ll also teach you a few simple tricks to keep your cast iron skillet in tip-top shape.

I bought a cheap cast iron skilled and tried to season it myself.

The winters get extremely cold where I live, and I learned that using my BBQ was probably out of the question if I wanted to eat a delicious steak at home during the winter. The next best option is a cast iron skillet on the stovetop or oven. So I bought an inexpensive cast iron skillet, brought it home, and tried to season it myself, following the instructions I found online.

It was a disaster.

After seasoning it three times, the pan was still sticky, so I had to scrap the whole process and start over again with a pre-seasoned skillet. It’s worth noting that even if you’re able to season your cast iron skillet successfully, it will never be as good as a pre-seasoned one. The process of seasoning cast iron is time-consuming and complex, and it’s easy to make a mistake.

And we’re at a massive disadvantage because most of the cast iron skillets on the market are not polished anymore. A friend of mine is a chef and explained that (most) companies stopped polishing their cast iron skillets properly to save a few dollars on labor costs. That means they arrive rough and unfinished, and it’s up to the consumer to do the seasoning.

I spent weeks trying to polish my cast iron skillet with sandpaper, elbow grease, and patience. It was a lost cause. The skillet was never going to be as smooth as it needed to be, no matter how much I polished it. So I had to buy a new one.

What the heck is pre-seasoning?

So, what is pre-seasoning? Pre-seasoning is the process of coating the skillet with a layer of oil. This helps to create a non-stick surface and prevents the skillet from rusting.

It’s a simple process you can do at home, but it’s important to note that pre-seasoning is not the same as seasoning. Seasoning is the process of cooking fat or oil into the skillet to create a non-stick surface. Most people think of this when they season their cast iron skillet.

Pre-seasoning is the process of coating the skillet with a layer of oil before you use it. This helps to create a non-stick surface and prevents the skillet from rusting.

I highly recommend that you buy a pre-seasoned cast iron skillet. It will save you time and hassle in the long run. Not to mention, it will make your food taste better.

Why spend extra money on a pre-seasoned skillet if you have to season it yourself?

Like most people, you’re probably wondering why you should spend the extra money on a pre-seasoned skillet when you can season it yourself.

The answer is simple: because it’s worth it.

Pre-seasoned skillets are less likely to rust and have a better non-stick surface. They’re also easier to care for, which means you’ll spend less time cleaning and more time cooking.

Not to mention, pre-seasoned skillets are simply more convenient. You don’t have to worry about seasoning them yourself; they’re ready to use immediately.

If you’re serious about cooking, you should invest in a pre-seasoned cast iron skillet. It’s worth the extra money and will make your life easier.

So far, the best one I’ve found is the No. 12 Cast Iron Skillet from Smithey. They’re made in the USA and have a smooth mirror finish right out of the box.

They’re a lot more expensive, but for someone like myself that cooks at home six days a week, it’s worth the investment.

No matter which skillet you choose, make sure it’s pre-seasoned. It’ll save you time, money, and hassle in the long run.

How to care for your cast iron skillet, so it lasts for years.

If you have a cast iron skillet, it’s essential to know how to care for it. With proper care, your skillet will last for years.

Here are a few tips:

If you follow these tips, your cast iron skillet will last for years. And it will be ready to use whenever you need it.

If you’ve got the disposable income, do yourself a favor and buy a pre-seasoned cast iron skillet. It will save you time and hassle in the long run. Not to mention, it will make your food taste better.

I recommend splurging and going for the one I mentioned from Smithey, but I’m sure there are other options to suit your needs and budget.

Five Things You Should Do When Arriving At Schiphol Airport