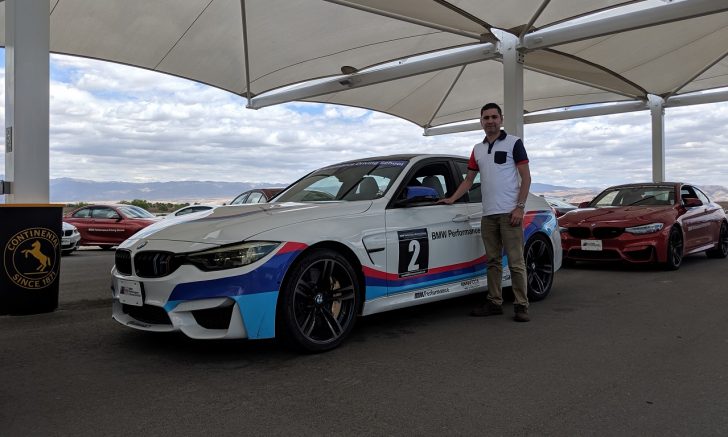 The Cars at The BMW Performance Driving School

A couple of weeks ago we were at the BMW Performance Driving School at the Thermal Club racing track, learning about racing lines, how to be a better driver, and driving some of the latest cars from BMW. Below are some of the cars we drove, if you go for a full course, you’ll get to drive more than these cars.

BMW makes some very fun to drive cars and I enjoyed all the cars we drove; however, the 2019 BMW M2 Competition was my favorite of the lot. The M2 is what the M3 used to be, a small car with a lot of power, the M2 Competition is powered by a turbocharged 3.0 liter inline-6 engine, producing a massive 405 horsepower between 5,230 – 7,000 rpm and 406 pound-feet of torque between 2,350 – 5,230 rpm, power is sent to the rear wheels via a 6-speed manual or a 7-speed dual-clutch automatic transmission, our car was equipped with the automatic transmission. All this translates to a 0 – 60 mph time of 4.2 seconds with an electronically limited top speed of 155 mph.

The M2 Competition was the lightest car we drove and I enjoyed every lap with this car. It’s a proper sports car with lightweight (for a modern car) and a massive amount of power, and the power sent to the correct wheels (the rear ones, if you’re wondering). If they allowed us to take one car home, this is the one I would’ve taken. Prices for the 2019 BMW M2 Competition start at $58,900.

The BMW M3 is probably one of the most famous performance-oriented cars in the world, I’ve been drooling over this car since the day I could drool. The BMW M3 is powered by the same 3.0-liter twin-turbo inline-6 engine in the M2, but in the M3 it produces 425 horsepower and 406 pound-feet of torque, power is sent to the rear wheels via a 6-speed manual or a 7-speed dual-clutch automatic transmission.

The BMW 3-Series is all-new for the 2019 model year, so the newest version of the M3 isn’t available yet, but from what I’ve heard, it will come with AWD. I’m not 100% sure if a rear-wheel drive model will be available.

Years ago, if you wanted a mid-size luxury sedan that performed like a sports car, the BMW M5 was the go-to car. Our on-track car wasn’t quite the M5 but it was close, the M550i is an executive sedan during the day and a sports by night. It’s powered by a twin-turbo 4.4-liter V8 engine, producing 455 horsepower between 5,500 – 6,000 rpm and 480 pound-feet of torque between 1,800 – 4,750 rpm, power is sent to all four wheels via an 8-speed automatic transmission. The power produced by the M550i is almost supercar like, yet you can take three of your friends with you on a cross country trip in comfort. The M550i xDrive does the 0 – 60 mph sprint in a hair-raising 3.9 seconds.

The M550i is a great car, but for our drive on the short track, I think it was too much of a car for those very tight corners, especially with my lack of skills. I think this car would’ve been pretty awesome on the big track, were you can really open it up and feel the rush of all those 455 German thoroughbred ponies.

The BMW X5 M was heaviest vehicle we drove at the track, although I wouldn’t associate a big SUV with the track, the X5 still has the M DNA. However, driving the other lighter cars before this made it tough to judge speed around the corners in this heavy beast and I had a hard time remembering to slow down, ruining pretty much every corner. But on its own, the X5 M is a pretty decently capable track vehicle, and I’m sure the driving instructors could’ve put some amazing laps around the track even in this big and heavy vehicle.

The BMW X5 M is powered by a turbocharged 4.4-liter V8 engine, producing a massive 567 horsepower and 553 pound-feet of torque, putting many supercars to shame. Power is sent to all four wheels via an 8-speed automatic transmission. Prices start at $101,700.

For more information on these cars and other BMW product, check out BMW’s official website.

Originally published on June 3, 2019 in Cars