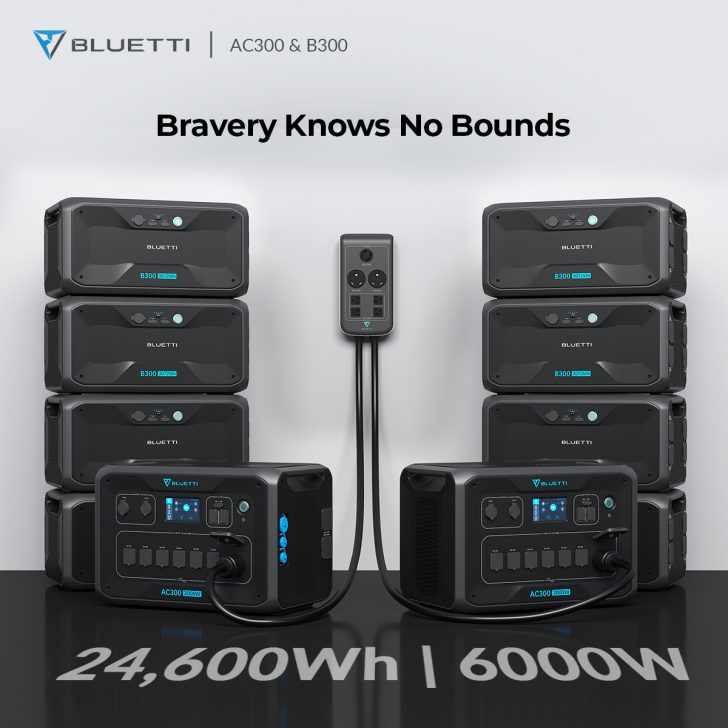 Following the massive $6.7 million US dollar Indiegogo crowdfund, BLUETTI sold tens of thousands of units of their BLUETTI AC200 power station last year, and hasn’t stopped there. July 1st, 2020 marked the calendar for the release of this game-changer, but just over a year later, all of the great customer feedback has allowed for many major improvements to these power stations, and thus a new successor has emerged.

Not only is there a new great heavy-duty power station on the market, but it is not alone. Four new models are launching at the same time. The BLUETTI AC200 MAX, and the AC300 are only half of the grand opening, because there are additionally two more expandable battery modules in the BLUETTI B230, and the BLUETTI B300. You can never get enough power in these things.

The EP500 Pro – BLUETTI’s starter 3000W home power center – had a wonderful premiere debut when it first launched on Kickstarter, and has been booming ever since. Not long after its time was finished, BLUETTI has improved greatly upon the EP500 Pro with their modular and flexible 3kW flagship: the AC300.

On top of each side, you’ll find two solid lifting handles to hold up a rectangular power box which packs a lot of punch in the design department. Especially because there is no internal battery pack. The modular design of the AC300 lets you select the B300 battery model to link up with the AC300 and reduce the overall weight by quite a large margin. Plus, this is a good future-proof move so that you can replace any and all batteries within the power station. Whether they stop working over time, or just to carry the modular BLUETTI system much easier.

Underneath the sleek design, you’ll find a 3000W pure sine wave inverter, complete with an MPPT controller, which supports solar charging up to a whopping 2400W. Four battery packs put together make a staggering total of 12.3kWh capacity, which is of course supported by just a single AC300. And if that’s not enough power, BLUETTI’s Fusion Box Pro will allow a connection between two AC300s, with double the power, and double the capacity, simultaneously. In total, that’s 6000W of continuous power, plus 24.6kWh capacity combined. Not to mention the 10.4kW of solar input that this groundbreaking device is capable of. Need an emergency power center? Well, here you have it. There’s over a week’s worth of power for your home essentials here. Alternatively though, with enough solar panels, you could theoretically power your entire house indefinitely, just through these innovative power stations.

The all-round successor got an upgrade

The AC200 MAX has a lot to say. No new design though, as it looks identical to its predecessor. However, the internal content is what matters. In its own right, the AC200 MAX is a whole other solar generator that is worth a closer look.

Its 100W PD3.0 USB-C port; paired with its pure sine wave inverter which features higher output power of 200W; the upgraded MPPT controller that can handle 900W of solar input; and not to mention the built-in 30A NEMA TT-30 outlet which is designed for RV crowds in particular – all put together is phenomenal for I/O compatibility. Speaking compatibility, after being extremely high in request, the BLUETTI AC200 MAX finally supports Bluetooth connection, and has a Smartphone App (on Android and iOS) to go along with it for wireless control. Last but not least, expendable battery packs are absolutely supported too.

Two extra battery packs are supported by the AC200 MAX, whether you use the BLUETTI B230, or if you want to go with the B300 instead. No matter, because both are viable. Not enough power? The AC200 MAX can be expanded to 8192Wh of capacity with two BLUETTI B300s, which will last you over a week for all of your essentials at home, and more.

When can I get one?

The latest information from BLUETTI that was released states that their official website will be the home of these new models. No crowdfunding, and no prolonged waiting at last.

You’ll be able to place orders for the AC200 MAX and the B230 battery modules in late August 2021, and it looks like there’ll be a delivery time of about three weeks. Later in September 2021, we’ll see the BLUETTI AC300 and B300, which may only take two weeks to arrive. They also have an official Facebook Launch Group, where you can find extra information, and even venture to their product pages to subscribe for emails which will show you the pricing for when the new models become available.

Last but not least

Some last minute hints from BLUETTI from their social media outlets present a cheeky look at a ‘product roadmap’. The AC200 MAX is listed as the ‘Challenger’, the AC300 as the ‘Dominator’, but that’s not all: an ‘APEX’ is also listed with an expected release date towards the end of 2021. Perhaps a more powerful and enticing model? Who knows? There is no further information as of yet.