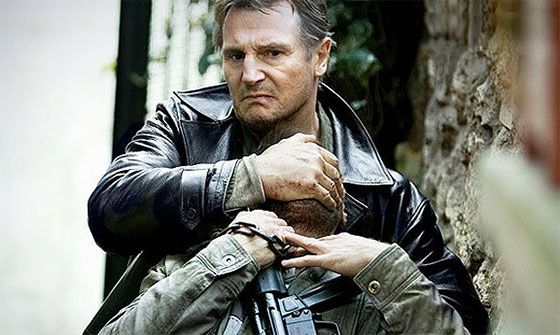 You know, Bryan Mills just can’t catch a break. First his daughter was taken in… Taken, and now his wife in Taken 2: Electric Wife Theft Boogaloo. Yes, that’s the official name of the movie; do you doubt me?

Taken 2 takes place in Istanbul, where retired CIA agent Bryan Mills must once again rescue a member of his family from the clutches of crazy Albania crime lords. This time it’s personal, since they’re all pissed off with Bryan for slaughtering their angelic sons wholesale in the previous movie. I know, quite the inspired and original store here.

As you’ll see in a moment, what Taken 2 lacks in original storytelling, it makes up for in incredibly brutal and stylish action sequences.

I can’t help but enjoy anything that Luc Besson has his hands in, and Taken 2 looks like it will be no slouch either. Liam Neeson returns in good form with the fighting skills and gusto of an operative half his age, and it’s refreshing to see his combination of fantastic acting, and good old fashioned fighting. Many films have one or the other, with the only other notable exception I can remember being the previous Borne movies, and hopefully the upcoming one. Matt Damon and Liam Neesen really need to team up one of these days.

Now, there’s currently no known release date for Taken 2, but I would be surprised if we don’t see it hitting theaters sometime this year. Given the success of the last film, I’m betting that the studio is anxious to get this one out the door so they can begin work on Taken 3, where Bryan Mills is captured by the parents of the parents in Taken. Bryan’s daughter Kim, having been trained by her father, must now track him and his captors down before Bryan is addicted to drugs and sold into prostitution.