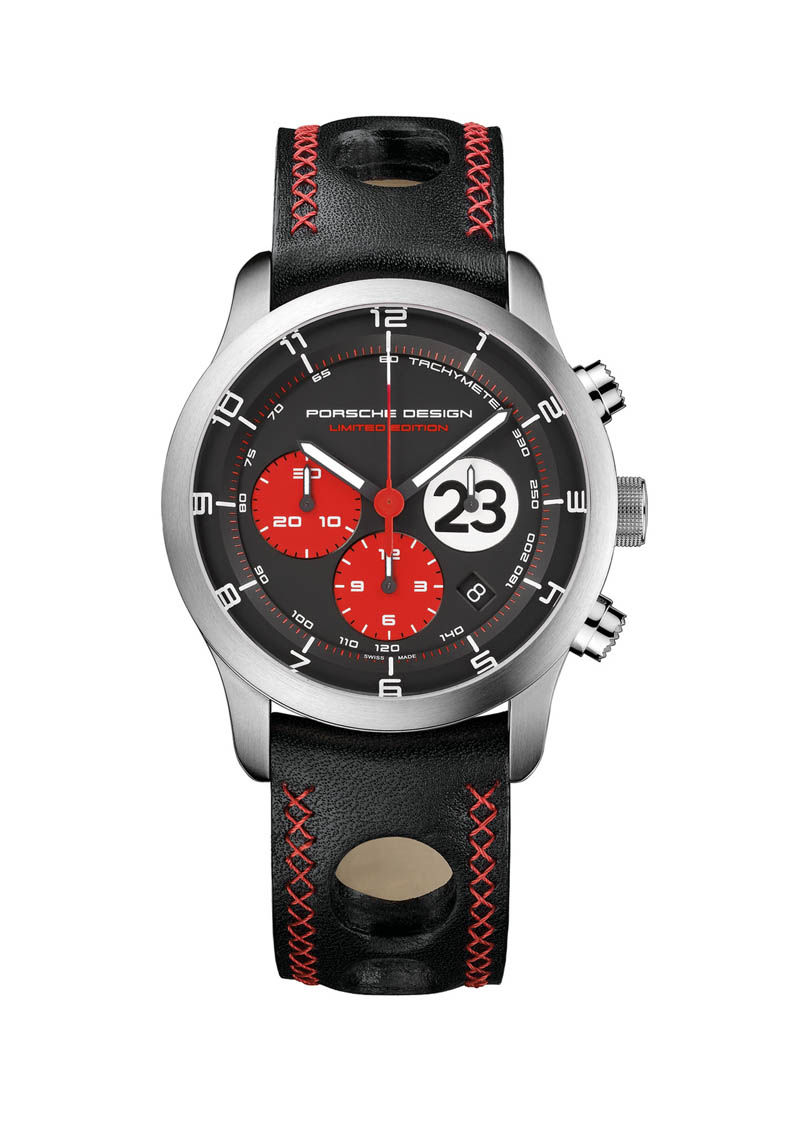 The 1970 24 Hours of Le Mans race was won by the Porsche 917 K driven by Hans Hermann and Richard Attwood.  Not only did Porsche win the race but their cars also came in the 2nd and 3rd place, sweeping the podium.

The P’6612 Dashboard Le Mans 1970 Limited Edition watch face styling is based on the design of the Porsche 917 K’s dashboard instruments, hence the name.  The face features the number 23 in a white circle at the 3 o’clock position, which was the number displayed on the winning Porsche 917 K.  The watch face features a black background with white hour and red minute indicators.  The hour and minute hands are painted white with luminescent material and the second hand is painted red.  The watch features a tachymeter, designed to look like a tachometer, that can be used to measure speeds of 60 kmph to 300 kmph, traveled over 1 kilometer.  The watch is also equipped with a chronograph, with the 30 minute counter at the 9 o’clock position and 12 hour counter at the 6 o’clock position.

The case is made out of brushed and polished titanium and comes with a screw down crown that has the words “Clous-de-Paris” engraved.  The watch has sapphire crystal on the front and the back, the watch’s limited number is engraved on the back along with the words “Winner Le Mans 1970”.  The P6612’s strap is made out of black calf leather with red stitching, designed to look like the 917 K’s steering wheel.

The watch is powered by an automatic self-winding ETA 2894-A2 movement with a custom Porsche Design rotor, offers a 42 hour power reserve, and oscillates at 28,800 vibrations per hour.

The Porsche Design P’6612 Dashboard Le Mans 1970 Limited Edition watch comes with a die cast model of the Porsche 917 K car and some signed stuff by Hans Hermann and Richard Attwood.  Only 917 individually numbered pieces will be available worldwide.  No word on how much these watches will cost.