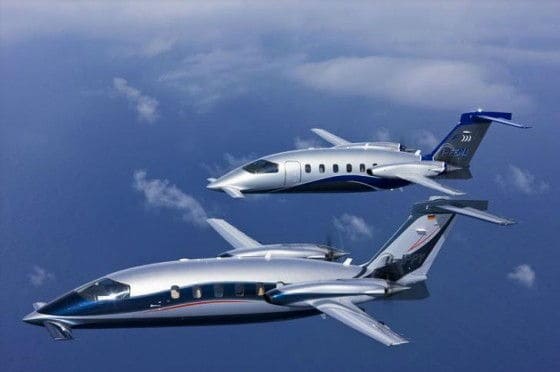 Not only is the airplane the fastest in its class but also the most affordable, most fuel efficient, and possibly the most luxurious for this class of aircraft. As a matter of fact, the P180 Avanti II can even match or exceed the performance of many of the turbo jets in this class. Besides all of these cool achievements, I can confidently say that this plane is the most handsome looking turbo prop that I have ever seen with its very unique placement of wings.

The unique design is based on the patented “Three-Lifting-Surface-Configuration” which uses forward canards, high aspect ratio wing (the mid-wing), and the T-tail (the rear). Piaggio Aero also claims that the design of the fuselage actually contributes to 20% of the lift while the three sets of wings generate the remaining 80% of the lift. Unlike other propeller aircraft, the P180 Avanti II features push configuration of the propellers which helps prevent propeller turbulence from interfering with wing aerodynamics because the propellers are behind the wing.  This also helps significantly with lowering total drag and improves performance. The Piaggio Aero P180 Avanti II has a top cruising speed of 405 knots (466 mph) and only burns 98 gallons of fuel per hour which is considered to be very fuel efficient. Depending on the configuration of the aircraft, you can have 7-9 passengers plus 2 pilots.

There are too many details that I could get into but if you like airplanes, check out the official Piaggio Aero website for all the details about this aircraft. Now my goal is to save around $7 million so I can pick up one of these bad boys. Check out more details in the video below along with a picture gallery.