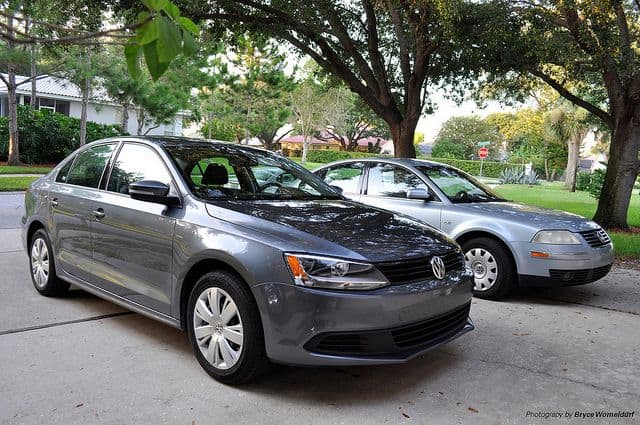 A Look at the 2014 Volkswagen Jetta: Standard, Hybrid and TDI

Volkswagen has lead the charge in efficient diesel-powered technology for years, championing diesel as a solution to the performance versus economy debate that often drives car buyers. Four out of the 10 most fuel-efficient vehicles sold in America are powered by reliable Volkswagen diesel engines, according to the U.S. Environmental Protection Agency. With the 2014 Volkswagen Jetta available in several engine types, it’s interesting to note what the differences are among the options:

Photo by IFCAR via Wikimedia Commons

The 2014 Standard Volkswagen Jetta is a roomy sedan with many new improvements. The 2014 model comes off the assembly line with a standard turbocharged engine, spacious and comfortable interior, and a a series of equipment updates. The updates include an independent rear suspension, rearview camera option and Car-Net telematics.

With its new 1.8 liter four-cylinder engine, Volkswagen claims the 2014 Jetta pumps out a stern 140 horsepower and 236 pounds of torque at 1750 rpm. The Jetta remains a four-door sedan with a roomy trunk, power door mirrors, telescoping steering wheel, power windows and the sleek Volkswagen style.

The standard 2.0L Base Volkswagen Jetta maintains 24 mpg city fuel economy, and 34 mpg highway economy. With the Standard Jetta, available at Volkswagen in Scottsdale and nationwide dealers, as a baseline, we can compare the Volkswagen Hybrid and TDI .

Cars.com reports the Jetta Hybrid clocks a miles-per-gallon rating of 42 in the city and 48 on the highway, which, at a glance, makes the hybrid seem like it’s more about efficiency than power. Don’t let its eco-friendly engine fool you—the hybrid still uses the same style turbocharged engine as the standard and is capable of pushing with 170 horsepower and almost 200 pounds of torque. While it’s not as powerful as the internal-combustion Standard Volkswagen Jetta, it still has a powerful seven-speed DSG transmission, proving the hybrid still possesses the power you need.

As Volkswagen‘s first hybrid passenger car in United States it needs to impress, and it does. With a lithium-ion battery pack and optional Fender stereo system, the 2014 Volkswagen Jetta Hybrid is not just for the economically- and ecologically-minded. It’s a fine car for any commuter.

Diesel-powered cars are entirely about efficiency, and the TDI does not disappoint, even alongside its hyper-efficient hybrid sibling. Fuel Economy.gov reports the 2014 Standard Jetta’s miles-per-gallon rating at 30 mpg in city and 42 on highway with a manual or quick-shifting automatic transmission. The TDI comes standard with a six-speed manual transmission, leather steering wheel, leather knob shift and power seats that the Standard Jetta lacks.

The TDI shines overall as the best option for economy, luxury, agility and power. It’s almost a mystery why Volkwagen isn’t pushing the TDI harder as the next big thing for the Jetta. All things considered, where does all this place the various incarnations of the 2014 Jetta? For Volkswagen, it seems like a clever move. Those who can’t afford to or can’t bring themselves to buy diesel have a powerful option in Volkswagen’s Hybrid, without sacrificing the cost-efficient MSRP of a Standard Jetta.