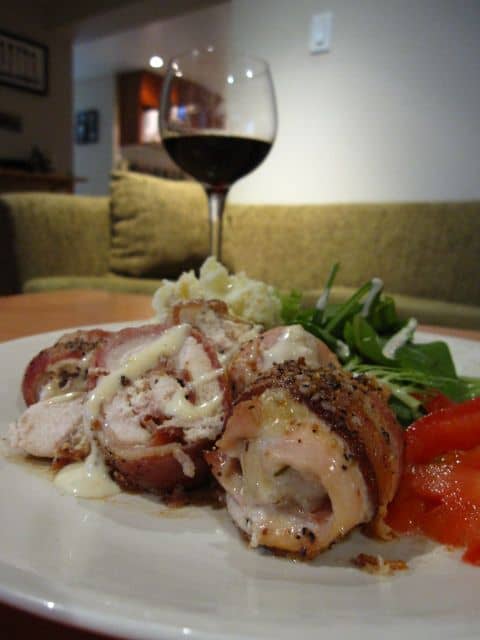 Welcome to Unfinished Man’s first cooking recipe! If you’re like us, you’re probably still a little hungover from a crazy halloween weekend. Thusly, we thought we’d start our premiere recipe with the man’s ultimate ingredient; bacon.

We’re going to wrap chicken with bacon and for fun, throw in some prosciutto and havarti cheese along with some other goodies.

If you need further explaination on why we love bacon, 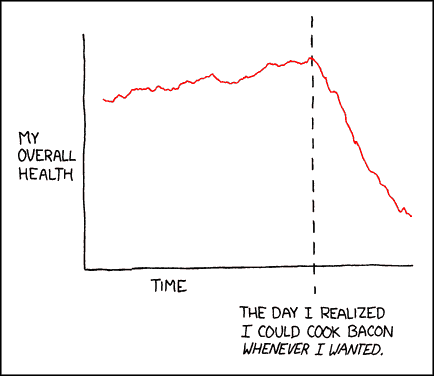 we would like you to refer to the following chart provided by the awesome online webcomic, xkcd.

Now, I’ll be honest. I’m not much of a cook and this is the fanciest thing I ever, ever cooked. This means if I can do it, you got a really good chance impressing the heck out of your girl. Originally, I just wanted to do bacon-wrapped chicken. But after some research, a little brainstorming and a large stomach growl, I decided to throw in some extra ingredients.

Firstly, I wanted to marinate the chicken breasts to soak in a little flavor in the meat. I usually stick with something simple when I do chicken soulvaki so I figured to do the same thing here. So in the morning, I threw the chicken in a bowl with some olive oil, lemon juice, basil, and oregano and let it sit in the fridge for the day. After marinating, the chicken was sliced into slices and lightly pounded with a mallette. Then I slapped a layer of cream cheese on the chicken. Next, I placed the prosciutto on top. Don’t ask why but for some crazy oddball reason, I thought I would sprinkle a bit of arametto on the prosciutto. Some recipies out there used a bit of pine nuts so I figured the next best thing was to use a nutty liquor to help liquify and add flavor to the prosciutto. On goes the havarti cheese. Then wrap those suckers up in the bacon. I didnt bother with toothpicks cause the mere weight held them down. For a little more kick, I added some meat seasoning before tossing them in the oven. Preheat at 350 and cook for about 50-55 minutes. As you wait, bust open that wine, sit back, and chillax. Road 13 is my favorite wine so I figured I’d give them a shout out for loosening up my arteries. For a side I decided to go with mashed potatoes using creamer potatoes. I sliced them up in chucks and threw them in a pot of boiling water. I’m a big fan of potatoe skins so I left them on. As the potatoes boiled for a while, the bacon-wrapped chicken was just oozing with aroma out of the oven. The exact time for the potatoes to be taken out varies on the size of pieces you cut. So I say take them out once you are able to easly poke through them with a fork.  Drain, toss some butter, mashed garlic and a couple spoonfuls of sour cream, and soon you’ll have a decent mix. After a couple glasses of wine, your avian swine should be finished. Slice ’em up, toss the potatoes with a bit a salad, and drizzle a bit of salad dressing. Since I’m a big fan of dipping, I added a bit of tzatziki for dipping sause. My god, this was the best meal I’ve had in a long time, let alone made all by myself!